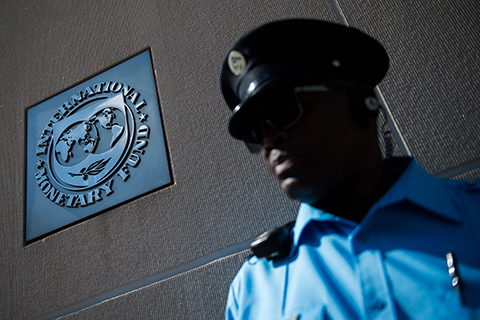 China must accelerate efforts to rein in credit growth and shift its focus away from short-term expansion targets toward reform in order to ensure sustainable economic development, the International Monetary Fund (IMF) said in its latest World Economic Outlook (WEO) report.

The Washington-based lender on Tuesday raised its estimate for growth in China’s gross domestic product (GDP) for 2017 to 6.8% from a July projection of 6.7%, citing better-than-expected economic performance in the first half of the year that was bolstered by earlier policy easing and supply-side reforms including cutting excess industrial capacity.

The IMF also raised its GDP growth forecast for next year by 0.1 percentage point to 6.5% on expectation that the government will maintain a “sufficiently expansionary policy mix,” particularly through high public investment, to meet its target of doubling GDP by 2020 from 2010.

But the fund warned that the higher projections reflect its anticipation that the economy’s transition away from the old growth drivers of investment and exports toward services and consumption will slow down, and that there will be a further increase in debt. This will leave the government with less fiscal leeway to respond to any “abrupt adjustment,” the report said.

The IMF called on the Chinese authorities to speed up their campaign to curb credit expansion in order to avoid a sudden and sharp correction in economic growth that could be triggered by a variety of factors. These include a funding squeeze in the interbank market or in the shadow banking market for wealth management products, by trade barriers imposed by the country’s trading partners, or by a return of capital outflow pressures due to faster-than-expected increases in interest rates by the U.S. Federal Reserve.

“Unless the Chinese authorities counter the associated risks by accelerating their recent encouraging efforts to curb the expansion of credit, these factors imply a heightened probability of a sharp slowdown in China’s growth,” the IMF said in its WEO report. A drop in the pace of expansion would also have “adverse repercussions” for other economies through weaker trade, commodity prices and confidence, it added.

China’s GDP growth rates for 2019-2022 were revised up by 0.2 percentage points on average on expectations that the authorities will delay the withdrawal of stimulus. But this protracted exit will give rise to more debt, which in turn increases the downside risks to the forecasts, the IMF said.

The government traditionally sets an annual target for economic growth that the premier announces in March. The goal is “around 6.5%” for 2017, down from a range of 6.5% to 7% for 2016. The IMF said policymakers should “deemphasize near-term growth targets and focus on reforms that would enhance the sustainability of growth.”

The government should ensure that fiscal policy favors the rebalancing of the economy and gradually lower its fiscal deficit to “a debt-stabilizing” level. It should also gradually drop monetary targets to increase the effectiveness of monetary policy and resume progress toward a more flexible exchange rate, the IMF said.

China’s credit boom since the global financial crisis, spurred by government efforts to support economic growth, has sparked widespread concerns that the world’s second-largest economy could experience some sort of banking or financial crisis.

Increasingly concerned about the risks posed by the scale of the liabilities, especially in the corporate sector and local governments, President Xi Jinping said in late 2015 that deleveraging should be a top priority in economic work. Since the summer of 2016 policymakers have focused on containing financial risks by deleveraging the financial system. At a meeting of the National Financial Work Conference in July, which is held every five years to map out financial reform, Xi pledged to make reducing the debt of state-owned enterprises as “the priority of all priorities.”