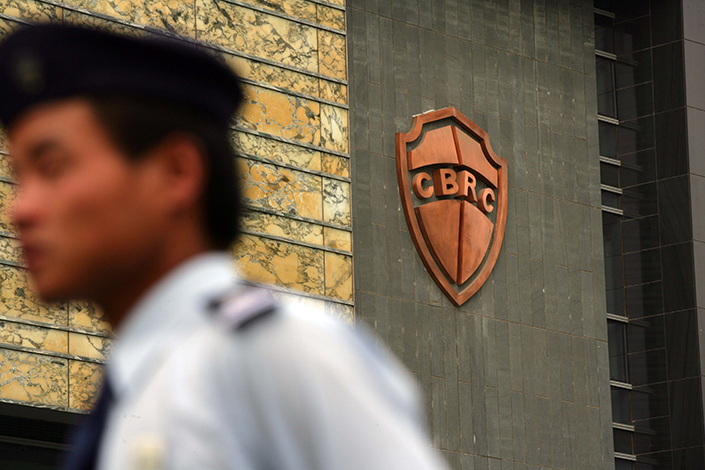 China Banking Regulatory Commission data show that the banking sector's outstanding interbank assets dropped by 13.8% from the start of the year to August. Photo: Visual China

China’s campaign to rein in financial risks and force banks to reduce their investments and liabilities is gaining momentum, with new data showing shadow banking activities have shrunk further since June.

The banking industry’s outstanding interbank assets, including holdings of interbank certificate deposits and acceptance bills, dropped by 13.8%, or 3.2 trillion yuan ($488 million), from the end of 2016 to the end of August, data from the China Banking Regulatory Commission show. That compares with a decline of 1.8 trillion yuan at the end of June. However, the industry’s interbank liabilities fell by 1.6% in the first eight months, narrowing from a 2.3% drop in the first six months. The CBRC did not provide figures for total interbank assets or liabilities.

“The data show financial institutions’ idle funds declined and the amount of funds flowing from the real economy into speculative activities has been contained, and that trend has consolidated and strengthened,” Xiao Yuanqi, director of the commission’s prudential regulation bureau, told Caixin.

Regulators have since March issued a string of regulations aimed at cleaning up risky activities and lowering leverage in the interbank market, where banks and financial institutions borrow from each other. Small and midsized lenders, who are more dependent than large banks on the interbank market for funding, have been hit hard by the rules. China Citic Bank said last month that its interbank assets had slumped by 51.5% at the end of June from end-December 2016. The CBRC data show that overall, the interbank assets of joint stock banks fell by 45% from Dec. 31 to Aug. 31.

The regulatory crackdown also took a toll on joint-stock banks’ holdings of interbank wealth management products (WMPs), with the year-on-year growth rate in the first eight months of 2017 dropping by 40 percentage points from the same period last year, the CBRC said, without giving the current rate of increase. The growth in the total outstanding holdings of WMP in the interbank market has fallen for seven straight months on a year-on-year basis, and was at 6.5% in August, the regulator said.

The pace of increase in bank investments made through special purpose vehicles (SPVs) is also slowing. SPVs are a type of entrusted investment, where banks outsource the management of some of their funds to third parties including nonbank financial institutions. But while investments through SPVs ballooned by more than 4.8 trillion yuan in the first eight months of last year, they rose by only 800 billion in the same period in 2017.

Xiao told Caixin that investments made through SPVs will be the next key target for CBRC investigation and regulation, as the underlying assets of those investments are hard to trace and banks haven’t set aside sufficient loan-loss provisions against them.

The CBRC will also be keeping a close watch on irregularities in the home loans sector, where many buyers have turned to the grey market to raise money for down payments, and on the potential risks hidden in the fast-growing consumer loans market.

“For the next step, regulators will tighten spot checks on wrongdoing such as the use of consumer loans to make down payments” on house purchases, Xiao added. “If the source of a down payment fails to comply with the CBRC’s criteria on issuing mortgages, it will be classified as an irregular loan.”

Concerns have been growing in the interbank market about the impact of the regulatory cleanup on banks’ ability to issue new negotiable certificates of deposit (NCDs), short-term bonds issued by banks to each other, to refinance some 2 trillion yuan of certificates maturing by the end of September. Xiao told Caixin that banks will be able to roll over NCDs to ease the impact on the market. There are an outstanding 8 trillion yuan worth of NCDs in China’s interbank market.