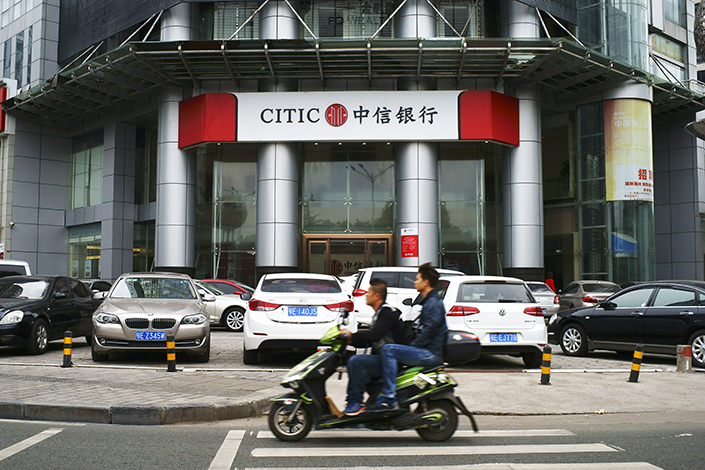 China Citic Bank’s interbank assets — including interbank certificate deposits and acceptance bills — shrank by a sharp 51.5% to 265 billion yuan ($39.83 billion) as of the end of June, compared with six months prior. Photo: Visual China

(Beijing) — China Citic Bank reduced its interbank activities during the first half as the government tightened oversight on transactions among lenders, which the bank’s executive said has resulted in a marginal rise in net profit.

The lender said Friday its interbank assets — including interbank certificate deposits and acceptance bills — shrank by a sharp 51.5% to 265 billion yuan ($39.83 billion) as of the end of June, compared with six months prior. The bank’s total assets also fell 4.7% to 5.65 trillion yuan over the same period, it added.

The decline in assets stood in stark contrast with the bank’s beginning-of-the-year target to expand assets by 4%.

The change came as the China Banking Regulatory Commission (CBRC) and the People’s Bank of China (PBOC) have been focusing on cleaning up interbank activities, which are seen as hotbeds of shady transactions.

“Interbank interest rates are expected to remain high in the second half of this year as the regulatory crackdown deepens,” said Fang Heying, vice president of Citic Bank.

“The crackdown will improve and normalize market conditions in the long run. But from a short-term perspective, it amplifies the volatility of the money market and brings challenges for interbank businesses,” Fang said.

He estimated that income from interbank activities could fall by more than 70% this year.

Citic Bank, a banking unit of conglomerate Citic Group, said Thursday that its first-half net profit rose marginally by 1.7% from a year earlier to 24 billion yuan.

Revenues fell 2.1% to 76.58 billion yuan, as its interest margin narrowed to 1.77% from 2.05% from a year ago amid rising interbank borrowing costs. Fang added that most smaller lenders likely faced declining revenues during the first half of 2017.

The bank has also boosted its retail and bank-card businesses as it chases higher returns.

Of the 210 billion yuan in new loans made during the first half, 82.4% were extended to retail clients, the bank said. In the lender’s outstanding-loan book, 36.6% are owed by individuals, it said.

Citic Bank also put most of its investment into expanding its credit card business in the first half, Fang added.

“We are expanding the base of our cardholders by all means,” Fang said, “We feel that upgraded consumer spending will be the source of future revenue growth.”

Credit quality at Citic Bank improved, with its bad-loan ratio slipping to 1.65% by end-June from 1.69% by end-December. Bad debt provisions, or the proportion of funds set aside as a risk buffer, decreased to 153% by June from 155.5% six months before.