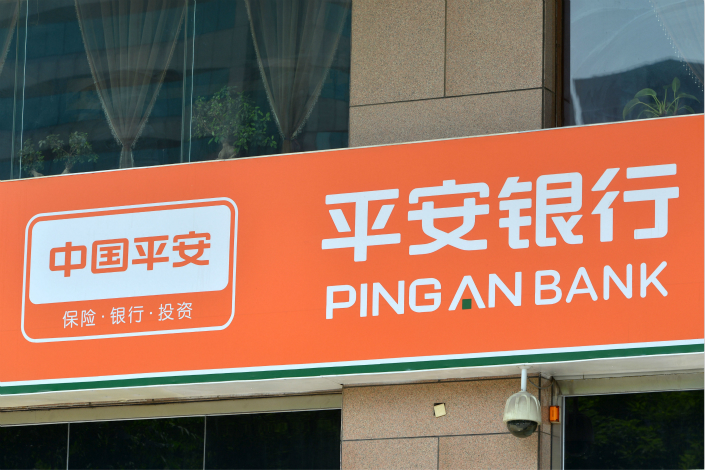 Ping An Bank reported a 2.1% growth in net profit for the first six months of this year thanks to stringent cost control, but revenues dropped for the first time since the bank's listing in 2013. Photo: Visual China

The marginal improvement of Ping An Bank’s first-half results suggests that Chinese banks are still weighed down by stubborn credit risks and regulatory curbs on interbank financing activities.

While the midsize bank on Friday reported a 2.1% growth in net profit for the first six months of this year thanks to stringent cost control, revenues dropped for the first time since its listing in 2013, and the nonperforming-loan ratio edged higher.

Chinese banks have been hit by a double whammy of slowing economic growth and tightening regulations. As the government continues clamping down on easy credit and underregulated shadow-banking activities, such deleveraging efforts coupled with slowing loan growth have been weighing on lenders’ profitability.

Ping An Bank said its nonperforming loan ratio edged up by 0.2 percentage point to 1.76% as of end-June. Bad loans totaled 28 billion yuan ($4.21 billion) by the end of the second quarter, up from 21.2 billion yuan a year ago.

Loans overdue by 91 to 180 days, which are seen to have the potential to turn sour, accounted for more than half of the bank’s nonperforming loans during the reporting period. Market watchers say it is higher than the average among commercial banks.

Total revenue was down 1.3% at 54.1 billion yuan. It was Ping An Bank’s first revenue decline since it was spun off from China’s second-largest insurer, Ping An Insurance Group, through a listing on Shenzhen Stock Exchange in 2013.

During the first half, Ping An Bank’s net interest income, which accounts for almost three-quarters of the bank’s revenue, dropped 0.6% from a year ago to 37.4 billion yuan. Noninterest income, such as commission and trading fees, fell 2.7% to 16.7 billion yuan, mainly because of sharply lower revenues from trading interbank bills.

As of the end of June, Ping An Bank’s net interest margin — a bank’s key profitability metric — narrowed to 1.22% from 1.41% a year earlier.

Since late 2016, the China Banking Regulatory Commission and the People’s Bank of China have focused on cleaning up off-balance-sheet and interbank activities, which are seen as hotbeds of shady transactions. The result is that interbank interest rates rise, while lenders’ interest margins fall.

Ping An Bank’s net profit for the first six months of this year totaled 12.6 billion yuan, up 2.1% from a year ago, as stringent cost control offset drops in both interest and non-interest income.

After the bank reshuffled its top leadership months after its involvement in a fraud scandal in late 2016, Ping An Bank has been trying to switch its business focus from corporate banking to retail banking.

The plan is for the bank to absorb more retail clients from its insurance parent, hoping to boost the total number of retail customers to 110 million within three to five years, from 58.4 million as of the end of June.