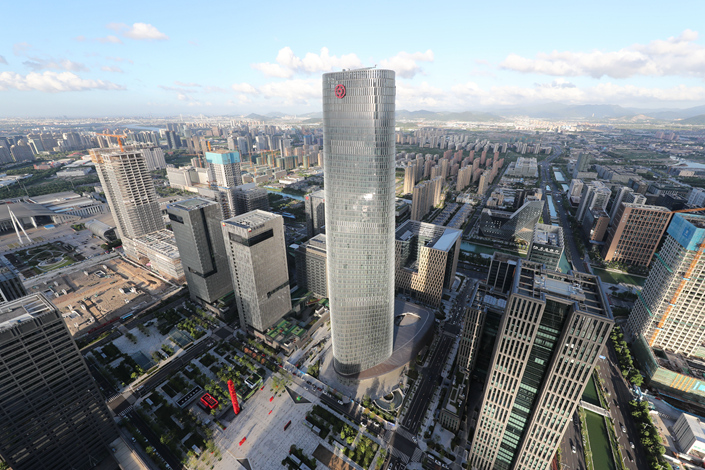 Smaller banks are hit by the authorities’ recent tightening of mortgages and local-government financing, while major banks are still going strong. Above, a Bank of China building in Ningbo, Zhejiang province on Aug. 23. Photo: Visual China

The government’s battle against leveraging will likely deepen the divide in China’s banking sector.

The interbank market, where banks and financial institutions trade assets and lend to each other, has been a key target in the country’s campaign to curb systemic risks and excesses. As interbank rates as a result jumped nearly 200 basis points from December through June, less-capitalized banks were less profitable during the first half of this year as they paid more for borrowed funds to make loans. Larger banks that sit on massive customer deposits, on the other hand, enjoyed higher margins from their being lenders in the interbank market.

Also, measures that aim at cooling the white-hot property market and curbing local-government financing hit smaller banks harder as mortgages and local loans are their primary businesses. Larger banks, however, mitigated that slowdown by lending more to bigger corporations.

During the first six months, leading Chinese banks posted an average of 6.2% net-profit growth before setting aside funds to cover bad loans. It fared better than a decline of 0.9% among midsize stock-joint banks and a 0.9% growth among smaller rural commercial banks.

“State-owned large lenders posted a better-than-expected performance during the first half and showed consolidating fundamentals,” analysts Qiu Guanhua and Wang Jian at Guotai Junan Securities Co. wrote in a Sept. 4 report. “Midsize to smaller lenders performed worse than anticipated, but we expected their earnings to rebound by year-end as bad loans and interest margins improve.”

But still, some trends were sectorwide and will likely remain so.

For starters, credit quality improved for most banks, big and small, as the economy stabilized. But risks are far from subsided, as the country’s fight against overcapacity in some industries and the state sector could result in more bad loans in the years to come.

Also, fee and commission income fell for both big and small banks, as regulators clamped down on complex structured investment products that carried hidden risks.

In the January-through-June period, trading and lending in the interbank market declined for the first time since 2010. As activities dropped, interbank assets, including interbank certificate deposits and acceptance bills, shrank by 5.6% as of the end of June compared to the end of 2016. Liabilities among lenders also dropped 2.3%.

Outstanding entrusted loans are off-balance-sheet lending among companies, and are therefore part of the country’s shadow-banking system. In June, they declined for the third straight month to 13.79 trillion yuan ($2.11 trillion), said Xiao Yuanqi, head of the prudential regulation bureau of the China Banking Regulatory Commission (CBRC), on Aug. 18.

Banks’ profits can rise and fall in the same shrinking interbank market, depending on whether you are the lender or the borrower.

The net interest margin (NIM), a key profitability metric that measures the difference between a bank’s income from lending and its funding cost, improved by 4.5 basis points for leading Chinese banks during the first half.

Bank of China, for instance, reported a 1 basis point widening of its NIM in the last half-year.

“As a lender that boasts some 19 trillion yuan of assets, 1 basis point of NIM improvement means more than 2 billion yuan worth of interest income,” Bank of China Vice President Zhang Qingsong said at an earnings conference late last month.

Market consensus believe that the sector’s NIM, which dipped by 0.3% from the end of June through the end of December, will unlikely rebound sharply, although any significant worsening isn’t probable either.

Hua Xia Bank added that its key focus now is the management of funding cost, while Ping An Securities Co. said recently that the impact of the NIM over small and midsize lenders could ease in coming months.

Retail lending such as credit-card businesses, microloans and consumer financing regained strategic importance in most banks. China Minsheng Bank Chairman Hong Qi recently announced this strategic shift, saying the bank’s battlefield is moving back to loans for the private sector and microloans to individuals.

Growth of mortgages, which made up of most new loan in the second quarter of 2016, tapers at most Chinese banks as the government continues to rein in the sizzling property market.

Looking ahead, bad loans could rebound

For the three months ended June 30, nonperforming loans (NPLs) accounted for 1.74% of outstanding loans at Chinese commercial banks, holding steady for three consecutive quarters, according to data from the CBRC.

In yuan terms, however, NPLs rose to 1.64 trillion yuan as of the end of June, an increase of 56.3 billion yuan from the end of March, the CBRC said. While “special-mention loans,” or loans that have been flagged because of doubts over future-repayment prospects, dropped in the second quarter, it had still risen more than 200% from 2014 levels.

But the CBRC said earlier that bad loans in the banking sector were under “great pressure” to rebound.

Most listed banks reported NPL ratios that were below the industry average of 1.74%. The big four state-owned banks not only saw their NPL ratios improve, but the total amount of NPLs decreased and the trend for special mention loans also improved, according to research from China International Capital Corporation (CICC).

As interbank assets dropped, risks may not be reduced proportionally.

Some banks are trying to increase their channeling business through new accounting items, in which nonbank financial institutions earn fees by acting as intermediaries to help banks circumvent capital requirements that are supposed to be set aside as risk buffers, Caixin learned from banks’ first-half reports.

For instance, asset-management products issued by financial institutions, a major component of banks’ channeling business, are recorded on the balance sheet under an accounting item called “receivable investment.”

This item saw a surge among mostly smaller banks — Bank of Beijing, Bank of Jiangsu, Bank of Guiyang and Bank of Hangzhou — during the first half of 2017. The problem is, the loan-loss provision of that item is much lower and therefore could be another hotbed of risks.

For instance, Bank of Guiyang held trust and asset-management plans totaling some 76 billion yuan by end-June. The amount accounted for 99% of its “receivable investment” and 18% of the bank’s total assets. However, the loan-loss provision for these assets was at a low 1.44 billion yuan.

A senior regulator told Caixin that the CBRC should review assets recorded under this accounting item, and then classify the assets between standard investments and channeling business. If funds somehow finally flow to “zombie” companies, or unprofitable enterprises propped up by the government, the CBRC should order the banks to exit this strategy.