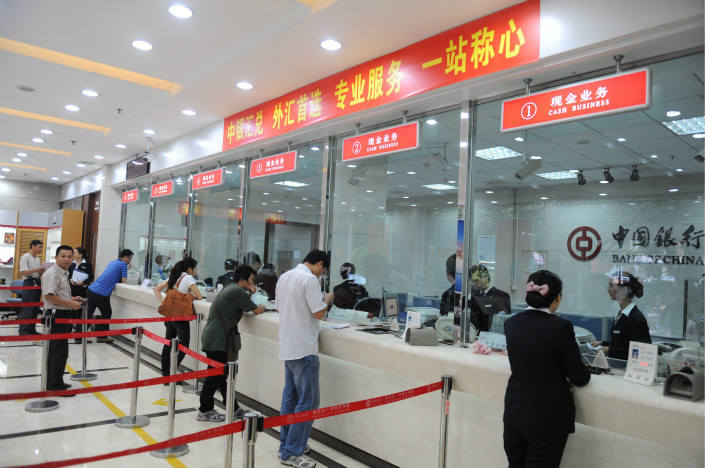 Bank of China reported 11.5% growth of net profit for the first six months from a year earlier as the country’s biggest banks continued to see improvement to their bottom lines. Above, customers take care of business at a Bank of China branch in the southern city of Foshan in November 2009. Photo: Visual China

Key profitability and credit metrics at major Chinese banks continued improving in the first half this year as they earned more from lending to businesses, and as fewer loans went sour, while the government continues to clamp down on systemic excesses.

In concert with the government’s call to leverage bank loans to expand the real economy, these megabanks have been lending more to the corporate sector, which boosted their respective net interest incomes. And as China’s economic growth has picked up for a few quarters, credit quality has also improved and net interest margins, a key profitability metric, continued to expand, albeit slowly.

However, the government’s ongoing clampdown on off-balance-sheet activities ate into their fee incomes, although higher interbank interest rates in fact helped big banks’ earnings as they could charge more while lending to smaller banks.

Improving earnings prospects have boosted shares of these financial behemoths this year: ICBC has gained more than 40% since the beginning of 2017, ABC has risen 30% and BOC 20%.

From January to June, new loans made by all Chinese banks increased by 8.8 trillion yuan ($1.33 trillion) a year from the same period in 2016, the China Banking Regulatory Commission (CBRC) said earlier. Assets of the country’s banking sector rose by 11.5% to 243 trillion yuan. The average profit growth of commercial banks was 7.9% for the first half, the regulator added.

All three banks reported a 6% to 7% increase in net interest income during the reporting period. Corporate loans in general can charge higher interest rates than personal loans.

Brokerage CLSA said that the sector’s NIM will likely be largely flat in the second half, as Beijing’s directive of lending more to support economic growth means banks will find it difficult to materially raise loan pricing further.

The nonperforming loan (NPL) ratio, another key metric of credit quality, also improved as fewer companies defaulted on their debts while the economy grew more steadily. BOC’s NPL improved to 1.38% as of end-June, compared with 1.46% as of end-2016. ABC’s bad-loan ratio fell to 2.19% from 2.37% during the same period, while ICBC’s ratio contracted to 1.57% from 1.62%.

The government since late March has tightened curbs on the interbank market, especially on loans and bill financing among lenders, to prevent hidden risks from ballooning within the financial system. Analysts and industry executives have said smaller banks’ earnings are more vulnerable to the deleveraging campaign as they typically rely on the interbank market — where the costs of funding have risen due to the campaign.