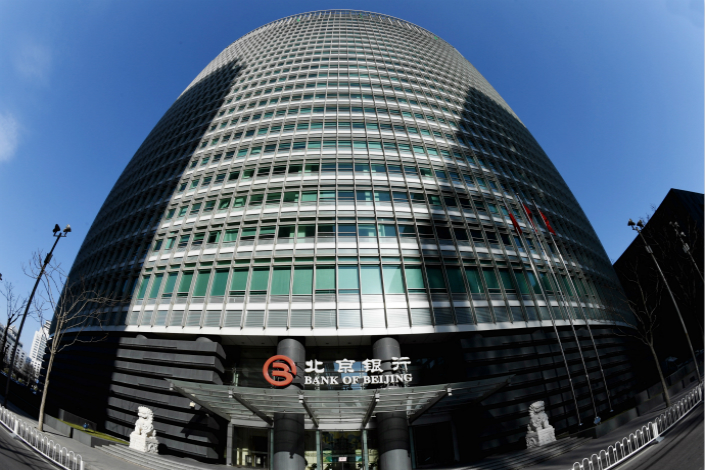 Data from the China Banking Regulatory Commission shows that nonperforming loans accounted for 1.74% of outstanding loans of all Chinese commercial banks combined in the second quarter. Above, the Bank of Beijing is seen in the nation's capital in January. Photo: Visual China

The proportion of China’s commercial-bank loans that turned sour has remained flat for three consecutive quarters, but officials have warned bad loans might have been understated and that default risks could be rising.

For the three months that ended June 30, nonperforming loans (NPLs) accounted for 1.74% of outstanding loans of all Chinese commercial banks combined, according to data from the China Banking Regulatory Commission (CBRC). The NPL ratio has been the same since the fourth quarter of 2016.

A CBRC-led audit at the beginning of this year found that actual bad loans were higher than what the banks had on the record, a vice director of a provincial branch of the banking regulator told Caixin.

In a report last year, the central bank estimated that lenders might have understated the amount of nonperforming loans by at least 50%, which suggests that bad loans at commercial banks could be as high as 4 trillion yuan.

This could present a problem as the amount of funds set aside for bad loans, totaling 2.9 trillion yuan at the end of the second quarter, is only enough to cover reported levels of bad debt.

In addition to being underestimated, bad loans may be on the rise too.

“The banking industry’s risk control situation is still complex and difficult, and pressure for nonperforming loans to bounce back is very high,” according to an official transcript of the CBRC’s mid-2017 Work Forum held on July 29.

NPLs are set to increase until 2019 at the earliest as the economy slows while the government steps up its deleveraging campaign, according to a recent report from China Orient Asset Management, one of the country’s four national state-owned asset management companies.

Bad loans have been gradually building up since the fourth quarter of 2011, when the NPL ratio as well as the value of bad loans stopped declining. By mid-2017, bad loans had nearly quadrupled from the end of 2011, when they stood at 428 billion yuan, and represented about 1% of outstanding loans.

“Special-mention loans,” or loans that have been flagged because of doubts over future repayments, dropped slightly to 3.42 trillion yuan in the second quarter of this year, but represent a more than twofold increase from 2014 levels, when those loans totaled 1.55 trillion yuan.

While local governments recognize this problem, some still see economic growth as their main priority.

“Taking care of risks is only one aspect of the job; supporting local economic development should be the top priority. Each rural commercial bank and rural credit cooperative must balance these two and promote positive economic development,” said a senior local official from Baiyin, Gansu province, during a special meeting called to discuss nonperforming loans.

Creditors’ committees have played in role in keeping bad loans down, said the vice director of a provincial-level banking regulator. Creditors’ committees, first promoted by the government to give companies breathing room to repay loans, help banks work with companies to renegotiate loan terms rather than recall loans. This reduces pressure on companies, which do not need to reclassify loans as nonperforming ones, the vice director said.