By Fan Shuo and Li Rongde 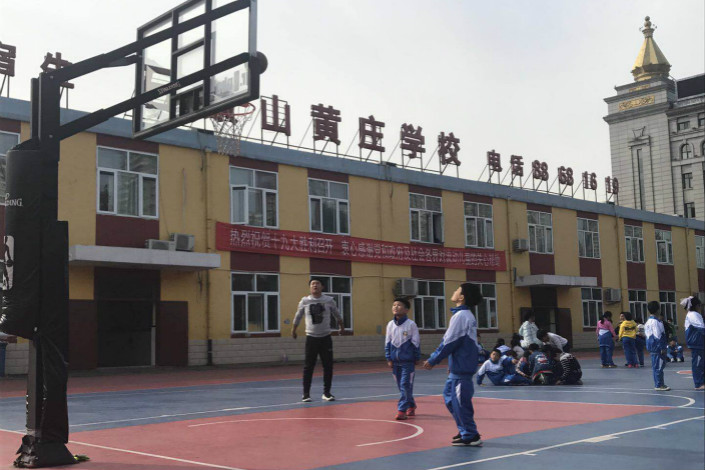 While Shijingshan Huangzhuang School has recieved a notice from the local education authority reading that it must shut down by late January, the authority told Caixin that it is awaiting instructions from the district government on the issue. Photo: Fan Shuo/Caixin

A Beijing school for children from migrant families is seeking public support to remain open after the authorities ordered its closure as part of a government campaign to curb the city’s population growth.

Shutting down the school, which offers classes from grades one through nine and pre-school courses, could leave nearly 1,500 migrant children in limbo.

In an open letter to the media on Monday, management of Shijingshan Huangzhuang School in the city’s Shijingshan district, said that it has received a notice from the local education authority ordering the school to wind down operations by the end of this semester in late January.

The Shijingshan District Education Bureau has given the landlord time till then to demolish school buildings deemed by authorities to be unlicensed developments, the letter said.

However, in response to a Caixin inquiry, an official from the local education authority declined to confirm the semester-end deadline for the school’s closure. He said the bureau is awaiting instructions from the district government on how to handle the issue.

Some parents broke down in tears when they heard about the imminent closure, said a teacher who wished to remain anonymous as the school is making a last-ditch attempt to remain open or get government support to relocate.

Tang Fangfang, whose 5 ½-year-old son attends the school’s kindergarten, works as an insurance salesperson in Beijing and her husband is a construction worker. The couple, in their early 30’s, are from Xinyang, Henan province. They told Caixin they were “shocked” by the news and didn’t know what to do.

“We can’t send our son back to our hometown to live with his grandparents because they are too old to take care of a child,” Tang said. “How could our parents look after a child when they are having difficulty taking care of themselves?”

Migrant families are required to produce a number of official documents including work permits and tax slips when admitting their children to public schools in cities where they work. The added requirements are part of China’s strict household registration system.

Many children of migrant laborers have been shut out of the public school system because their parents who work as street vendors, construction workers or scrap dealers don’t have access to the required documents including work permits. As a result, many migrant children are forced to attend shabby, private schools, often opened by other rural migrants.

Schools catering to children from low-income migrant families in the Chinese capital have been hit by a wave of closures after the central government ordered the municipal authority in 2015 to relocate some “unneeded functions” outside city limits to tackle pollution and congestion. Beijing has also set a goal of capping the city’s population at 23 million by 2020 from 21.7 million at the end of 2016.

The population clampdown appeared to have intensified after the Beijing municipal government released a set of recommendations for an action plan in February targeting unlicensed developments and building modifications. That has led to the forced closure of retail and wholesale markets and street-front bars and restaurants as well as private schools for migrant children en masse.

The Shijingshan Huangzhuang School has operated since 2005 on nearly three acres of land it leased from a company affiliated with the Beijing Gardening and Greening Bureau under the Beijing municipal government.

But, Beijing Jindu Gardening and Greening Company notified the school late August that it was terminating the lease, which is due to expire in 2025. The company said in the notice viewed by Caixin that it made the decision in accordance with government documents targeting unlicensed buildings.

The school teacher told Caixin that they had a license to teach from the local education authority, but had built several dormitories without proper building permits several years ago. But the landlord, a government-backed entity, was aware of the construction project.

The school was even asked by the district school authority in July to accommodate some 500 students from a local public school, which was demolished as part of a slum redevelopment program.

The Shijingshan District Education Bureau only promised to find school places for the five hundred local students as well as 47 pre-school children registered as Beijing residents or with a Beijing household registration document, known as a “hukou.”