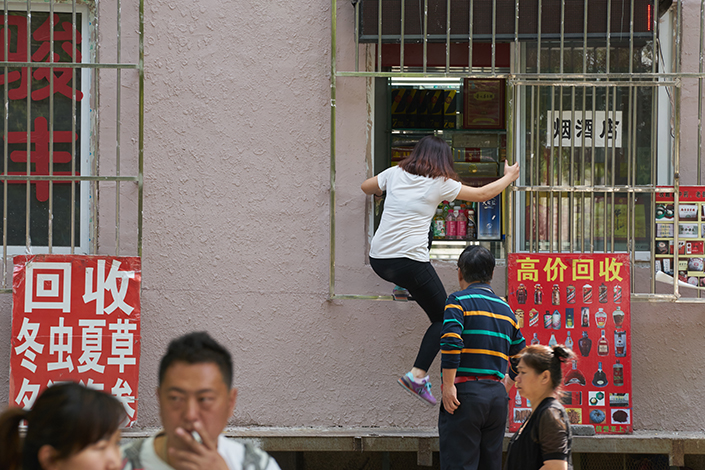 A grocery store employee climbs back in a store near Yaojiayuan Road in Chaoyang district, Beijing after handing a customer a bottle of water, on April 30. The original storefront was sealed during a government crackdown on illegal renovations of residential buildings. Photos: Liang Yingfei and Ma Minhui

Residents in Beijing have noticed recently that some of the side-street stores in their neighborhoods have suddenly disappeared – with the small openings at the foot of residential buildings, which were formerly the fronts of small restaurants, stores or hair salons now sealed with brick walls. Some newly remodeled walls have windows with signs still displaying previous services, such as “Hair Salon, Operating as Usual.”

At the beginning of this year, the Beijing government launched a campaign to crack down on local citizens who broke city rules by modifying residential-building first floors for commercial use.

In late April, the campaign expanded to the Sanlitun area of Chaoyang district, a place frequented by expatriates because of the clusters of bars and entertainment venues. Half of the storefronts were demolished or had their walls and windows sealed. The renovation extended into the Dongcheng district and other areas.

The illegal modifications of residential buildings into business units started in the 1980s, when the country began to shift from a planned to a market economy. People began opening businesses to make money wherever possible, and many residential buildings that were not designed for commercial use saw their ground floors used as shops.

Local authorities say such modifications can be dangerous, as they often change buildings’ structures, frequently including pillar walls. Illegal modifications may also add structures that block sidewalks or fire-passages. However, no major action was taken to correct these violations until recently.

Store owners have complained that the crackdown came too promptly, without giving them enough time to get rid of their stocks or negotiating the end of their rental contracts with property owners.

Residents living nearby also have mixed feelings. Some are happy that the alleys, or hutongs, which used to be noisy and disorderly because of the presence various businesses and bars, have become quiet now. Others complain that closing small shops have made their life inconvenient – they can no longer buy cheap groceries from neighborhood stores.

Despite complaints from business owners and some residents, the crackdown continues. According to the Beijing government plan, the work will continue for three years, to 2019, and planners say they will make sure all small streets and alleys are cleaned and free of illegally dug storefronts.