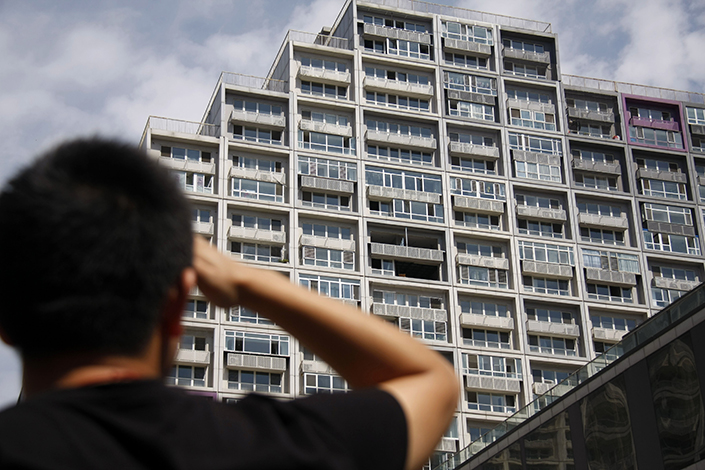 (Beijing) – Desperate to get on the housing ladder, Pang Fei shelled out more than 1.1 million yuan ($160,000) last year for a 38-square-meter (409-square-feet) loft apartment under construction on the outskirts of Beijing.

It was far from ideal, but at a cost of around 13 times the average annual salary in the Chinese capital it was the best the 35-year-old could afford. He was afraid that after years of waiting in vain for prices to fall, only to see them soar almost out of reach, this could be his last chance to fulfill his dream of owning his own home.

Pang, like thousands of other aspiring home owners, took a risk by buying what’s known as commercial housing – an apartment in a development originally approved and built as a commercial project but converted into individual housing units.

These types of property were in a regulatory grey area, but became increasingly popular over the last decade. They were cheaper than regular housing, although they came with shorter land-use rights and higher utility costs, and they were not subject to the progressively tighter purchasing criteria imposed by the Beijing government — such as a requirement for proof of tax and social security payments.

But now, Pang’s dream has turned into a nightmare. Struggling to control a housing bubble, the city government announced measures on March 26 that effectively closed loopholes that had allowed new commercial buildings to be turned into homes and sold to individual buyers. Under the new rules, developers now need government authorization to undertake the conversions and only legally registered public institutions, companies and other social organizations are allowed to buy units in such developments.

Although individuals can still buy commercial property, including commercial housing, banks can no longer offer mortgages for such purchases, and estate agents found marketing them as residential properties risk having their business license revoked.

The previously favorable eligibility criteria for buyers have been raised to the same level as those applicable to ordinary homes, including a five-year record of social insurance and personal income-tax payments.

The new measures killed the market for commercial housing overnight. Faced with the prospect of never being able to sell his apartment, Pang tried, without success, to negotiate with the real-estate developer to get his money back and pull out of the purchase agreement.

In desperation, he and dozens of buyers trapped in other commercial housing developments appealed to the city government for help. They petitioned the Beijing Municipal Commission of Housing and Urban-Rural Development in the hope of winning official support to have their purchase contracts declared invalid.

“I was born and raised in Beijing and I bought that property to live in it,” Pang told Caixin. “But I don’t want it any more – it’s worthless to me.”

The Chinese capital isn’t the only city to crack down on the conversion of commercial property – usually office buildings – into homes. Other tier-one cities – Shanghai, Guangzhou and Shenzhen – and Chengdu, the capital of Sichuan province in China’s southwest, have also imposed stiffer regulations on the practice to try and curb surging residential prices.

In January, Shanghai halted online contract signing for sales of commercial housing – a compulsory procedure for property transactions to prevent scams such as selling the same property to several buyers. On May 17, the city government announced it was suspending approvals for the development of apartment-style office buildings. It also stepped up scrutiny of commercial property projects under construction and of completed developments in which ownership has not been officially transferred to buyers, to check whether they have been secretly converted into residential units.

The draconian restrictions have sent the commercial real-estate market in China’s biggest cities into a tailspin, shattering the hopes of aspiring home buyers, leaving genuine sellers and speculators alike high and dry, and forcing developers to change their business models.

Only seven commercial property units – including apartments, offices and shops – were sold in Beijing in the three days following the government’s announcement, slumping from an average of 850 in a three-day period before March 26, according to figures from real-estate agency and research firm Centaline Group.

Commercial housing is built on land that has been registered with the government for development as offices, shops and other commercial business purposes. The apartments come with land-use rights of 40 to 50 years, compared with 70 years for normal residential housing, and water and electricity charges are higher.

But the market boomed, especially in big cities facing strong demand and inadequate supply of housing, because the drawbacks of commercial apartments made them more affordable, and they were not subject to many of the increasingly severe administrative controls on purchases of residential properties.

Before 2015, commercial housing prices were generally 40% to 60% lower than ordinary residential property. Some developers, keen to reduce inventories of unsold property to bolster their cash flow, were also prepared to accept down payments far lower than the required 50% of a property’s total price.

Residents who couldn’t meet Beijing’s requirements to buy residential housing snapped up commercial apartments as a way of getting on the property ladder and as an investment to help them ride the housing wave.

Individuals bought 90% of the more than 400,000 commercial property units sold in Beijing over the past decade, according to Centaline data. More than 60% of the purchases were commercial housing.

Developers were happy to jump into the market as it allowed them to offload surplus commercial developments amid waning demand for offices and shopping malls triggered by slowing economic growth and the rise of e-commerce.

Investors were also attracted to commercial housing by the rental yield, which was far higher than that on ordinary housing, and by the easy access to mortgages. In Shanghai, for example, the cost of an ordinary home in People’s Square in the center of the city’s old quarter, is more than double that of a commercial apartment in the same area, but the rents are similar.

Many investors interviewed by Caixin said they bought five or six commercial flats at one time, most on mortgages. Banks and some real-estate agencies provided loans for buyers to make the down payments, allowing speculators to leverage up to buy even more property.

This year’s crackdown has made it increasingly difficult for individuals to buy commercial housing. The latest measures taken by the Beijing government have stopped the market dead in its tracks as buyers have dried up, leaving sellers with no way of cashing out.

It’s also left commercial housing developers worried, as they wrestle with buyers who want to tear up their contracts and agonize over how to deal with the backlog of unsold projects.

“At the moment, we just can’t find any way out,” an executive with a leading property developer, who declined to be identified, told Caixin.

The modification of commercial buildings into residential apartments has long been a grey area and the government turned a blind eye for many years, first to help developers struggling to sell their developments and later to ease the housing shortage.

“The root cause of this phenomenon of turning commercial property into homes is the excess supply of commercial real estate,” said Ouyan Jie, a vice president of Future Land, a Shanghai- and Hong Kong-listed property developer.

“The commercial property market was saturated and developers were not allowed to build homes on commercial land. So they tested the boundaries of what the government would tolerate (with the alterations),” he said.

The practice of turning commercial property into housing started in the 1990s in Shenzhen when developers managed to sell some unfinished, long-suspended developments built on land registered for commercial use after secretly converting them into serviced apartments. News of their success spread to other cities where the model was replicated.

The limited supply of land for residential real estate has also incentivized developers to bend the rules.

“We can’t make bread without flour,” a Beijing-based project manager for a developer based in the eastern province of Fujian told Caixin on condition of anonymity. “We had no other choice – the government only sells several parcels of land (for housing development) and the competition to get them is extremely fierce.”

All Talk, No Action

The legal status of altered developments has been murky. Over the years, rules have been issued on an ad-hoc basis to regulate the market, but growth-obsessed local authorities tolerated the phenomenon and their clampdown rhetoric ended with little action. After the property market turned down in 2015, leaving hundreds of cities with gluts of unsold housing and commercial real estate, the State Council, China’s cabinet, explicitly allowed the conversion of offices and shops into housing for rent.

But this collusion has now come to an end as the property boom has pushed up commercial and industrial land prices, increasing the costs of manufacturers and services such as logistics and adding to pressure on already slowing economic growth.

Since the Beijing government implemented its latest crackdown, the housing department has suspended its online contract signing service for seven apartment-style commercial projects that were on the market. It has also revoked the business license of one developer and punished 520 branches of real estate agencies.

Some real estate developers, struggling to adapt to the tough new environment, are looking at other options.

“Housing rental is the way the sector has to go,” the head of the Shanghai subsidiary of a national real-estate developer, who asked not to be named, told Caixin. “We have been used to just building and selling but now we have to learn how to become owners and managers of property, for example running hotels,” he said.

Some analysts see a way forward via real estate investment trusts (REITs), which are companies, trusts or associations that own and operate income-generating properties such as apartments, offices, shops, and warehouses. In developed markets, REITs are open to public investment and provide investors with the prospect of capital appreciation as well as a regular income.

The more immediate concern for the government and developers, however, is how to resolve the brewing battle with buyers who have been left in limbo by the new regulations.

One recent purchaser who protested against her real estate developer in April said she was worried that the company would not carry out the promised alterations to the building to turn them into apartments, and that she would be left with a worthless asset.

“I’m afraid the residential functions such as natural gas, independent toilet and kitchen the developer promised will never leave the drawing board,” said the woman, who would only give her surname, Wang. She bought a commercial apartment being built in southern Beijing because she was not qualified to buy an ordinary residential property.

“The conditions for buying and selling are so tight now I don’t think I will ever be able to sell my apartment and make enough money to buy a real home.”

Stuck with an apartment he doesn’t think he will ever be able to sell, Pang is critical of Beijing authorities for not thinking through the consequences of their policies.

“The government's responsibility is to resolve social conflicts, but instead they just provoke them,” he said.