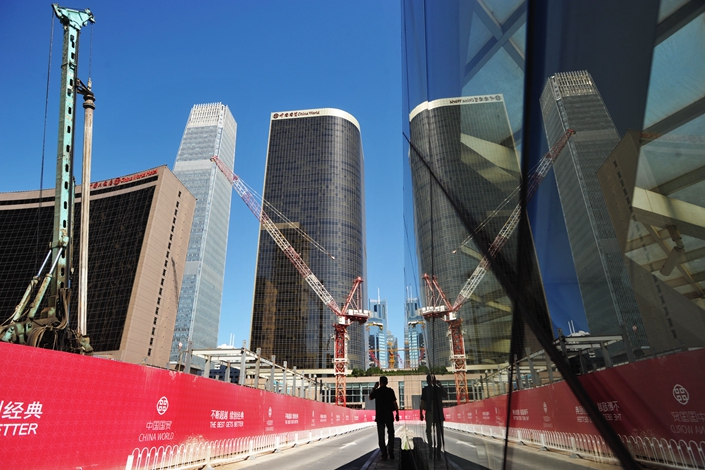 The China World Trade Center complex is seen in Beijing in September 2014. Beijing municipal officials have closed a loophole that allows commercial space to be converted into residential apartments. Photo: Visual China

(Beijing) — The Beijing municipal government, struggling to control a housing bubble, has strengthened curbs on property purchases by closing a loophole that allowed offices to be converted into residential apartments.

Authorities announced on Sunday that effective immediately, commercial buildings — mainly offices and shops — cannot be turned into homes for individual buyers without government authorization. In addition, only legally registered public institutions, companies and other social organizations will be able to buy units in such developments.

Commercial banks were also ordered to stop providing mortgages to individuals for the purchase of such apartments, and estate agents found marketing them could have their business licenses revoked.

The controls are the latest in a series of policies aimed at curbing runaway housing prices in Beijing. Last week alone, the government announced higher down-payment requirements, tighter scrutiny of purchases by people claiming to be divorced and tougher eligibility requirements for nonresidents.

Property developers have for years bought land registered for commercial use and built developments that were really aimed at residential use, dividing buildings into apartment-sized units. Such projects became increasingly popular among buyers because they were cheaper than regular housing and because the increasingly tight restrictions on purchases — such as a Beijing residency permit and proof of tax and social security payments — did not apply to commercial buildings.

Known as “altered-use properties,” these apartments come with land-use rights of 40 to 50 years, less than the 70 years given to normal residential housing. As the buildings were officially registered as commercial property, they had no natural-gas supply and they also carried higher electricity and property management charges.

They were also a target for speculators. Real-estate agent Centaline Property estimates that 60% to 70% of buyers were investors, with only about 30% of demand coming from people planning to live in the apartments themselves.

“The purpose of this adjustment is to steer office buildings and shops back to their originally planned use,” Zhang Dawei, an analyst with Centaline Property, told Caixin. He estimated the new restrictions will have a “significant impact’ on housing speculation in Beijing and that it will lead to a drop in prices.

Yan Yujin, an analyst with E-house China R&D Institute, a Shanghai-based real-estate services company, said the curbs are likely to cause a decline in the popularity and price of altered-use properties.