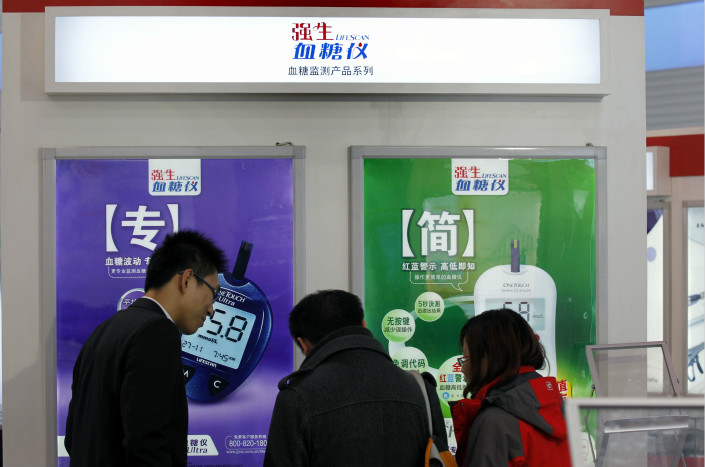 Johnson & Johnson's planned medical device plant in Suzhou will produce some of the health care company's most advanced surgical equipment. Above, the company hosts a blood glucose measuring booth at a medical-equipment exhibition in Beijing in March 2012. Photo: Visual China

American health care giant Johnson & Johnson has recently broken ground on a $180-million medical device plant in China, facing up to the rising challenge posed by its Chinese rivals.

The new facility, located in Suzhou, in East China’s Jiangsu province, is set to be one of the firm’s largest plants worldwide when operations begin in 2019.

This will be the first time that Johnson & Johnson produces tools used for minimally invasive surgical procedures in its largest overseas market, the company announced on Thursday.

The plant will produce some of Johnson & Johnson’s most advanced surgical devices, which can be used to treat diseases such as lung cancer, liver cancer and gastric cancer.

The medical device market in China has been expanding rapidly, growing more than 20% to 370 million yuan ($55.8 million) last year, according to the China Medical Pharmaceutical Material Association.

Besides foreign giants like Johnson & Johnson, domestic firms have also eyed opportunities in the sector. Some companies have beefed up their presence through acquisitions, such as the Fosun Group’s purchase of Israeli medical and cosmetology-device maker AlmaLasers Ltd.

Others have developed their own technologies to compete with overseas rivals. For example, Beijing-based Lepu Medical Technology Co. Ltd. obtained official approval to sell a coronary stent in August, which, the company claims, demonstrates similar clinical performance to a product produced by U.S. giant Abbott Laboratories.

Johnson & Johnson has had a presence in Suzhou since 2006, when it opened a plant producing orthopedic products. In 2011, the company set up an innovation center to design and develop medical and diagnostic products specifically for the Asian market.

Johnson & Johnson said it plans to partner with local suppliers and help them improve their technological and management standards through the recently announced plant.