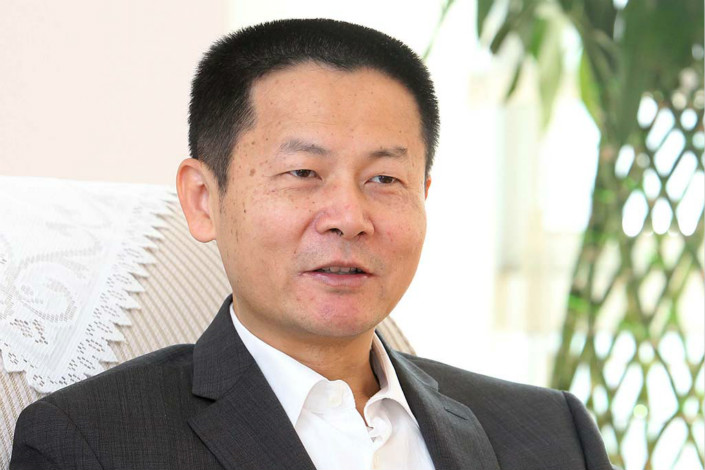 Shanghai Stock Exchange Chairman Wu Qing says the bourse is studying the possibility of a Shanghai-London Stock Connect, but the proposal has no timetable. Photo: Visual China

Shanghai and London are working on mutual stock-market access, an arrangement that will be similar to the stock-connect programs between Hong Kong and the Chinese mainland’s two A-share markets, Shanghai Stock Exchange Chairman Wu Qing said.

In a recent interview with a small group of journalists, Wu also said the country’s biggest bourse is seeking more power to clean up misconduct among listed companies, and he explained how the exchange is trying to balance innovation with market discipline.

Wu, 52, took the helm of the Shanghai Stock Exchange in May 2016 after years of overseeing the country’s stock market at the China Securities Regulatory Commission (CSRC). In 2009, as leader of a CSRC department that supervises fund managers, he oversaw a heavy crackdown on so-called rat trading, in which brokers profit from trading on undisclosed information such as pending orders from other brokers or their own clients. More recently, Wu became chairman of the World Federation of Exchanges.

Unlike the CSRC, the stock exchange is not intrinsically a regulator, but Wu said the bourse has an important role in frontline supervision.

Caixin: What frontline supervisory measures is the exchange taking? What are the results so far?

Wu: The Shanghai Stock Exchange has stepped up its frontline supervision in recent years, especially after the stock-market meltdown in 2015. The goal is to weed out risky practices that could roil market order and undermine the law as well as the interest of retail investors.

First, corporate disclosure is improving. Companies listed on the Shanghai and Shenzhen stock exchanges are now able to issue information in a timelier manner, as statements no longer need approval from us. We also proactively send queries to companies and demand clarification in order to uncover hidden risks and improper behavior. We take legal action against noncompliant companies too.

Secondly, we closely monitor trading irregularities, taking action as well as reporting them to the CSRC. We issue warnings against alleged activities that would siphon off money from retail investors. We also suspend the trading of suspicious market participants.

Third, we continue to urge brokerages to be aware of their clients’ behavior. Hopefully, that will stop improper activities at an early stage.

Caixin: In September, the CSRC sought public comments on a revised rule that will give the exchanges more power to police the market, such as conducting real-time surveillance, imposing restrictions on trading, carrying out on-site inspections and levying punitive fines. What do you make of those changes?

Wu: The draft rules will further clarify the responsibilities of a bourse. They will strengthen the tools at our disposal in order to be more effective. The stock exchange is best positioned to oversee the market during trading hours so that we can take timely action and stop improper behavior from escalating. Regulators do not have to wait until huge damage is done.

Caixin: As China pledges to widen market access to foreign players, what is the role and the plan of the Shanghai Stock Exchange?

Wu: China’s capital market is opening up more quickly in recent years. Initiatives such as the Qualified Foreign Institutional Investors (QFII) program and its renminbi equivalent — the RQFII program — as well as the the Shanghai-Hong Kong Stock Connect and the recent A-share inclusion in MSCI benchmarks are all milestones.

Under the “Belt and Road” initiative, we are cooperating more closely with other exchanges. We are studying the possibility of a Shanghai-London Stock Connect based on our experience with Hong Kong. We are working on it, and delegations from both sides have been visiting each other. However, we don’t have a timetable for that.

Generally speaking, a good momentum of economic growth is key to the opening of any capital market. If our economy is not strong enough, more openings could bring in more troubles and difficulties. But we also should not suspend the opening process either, so we must consider our own conditions.

Caixin: As an exchange, how are you balancing innovations with risk management of financial products?

Wu: We have set up a committee to oversee risk management and product innovation this year. We aim to balance those two factors, instead of pushing ahead recklessly.

We are also studying the feasibility of new index options that based on the blue-chip CSI300 index, as well as fixed income products and asset-backed securities (ABSs). Some of them need approval from the regulators, while others, such as ABSs, green bonds and exchange-traded funds, could be launched once we adequately communicate with the market.

Caixin: One of the exchange’s ongoing tasks is to improve the delisting system. What’s new on that front?

Wu: An adequate delisting system is important for any capital market, as it guides investment away from misbehaved companies and protects investors. But since 2001, only 23 companies have been taken off the Shanghai Stock Exchange, which is a very low number.

Delisting remains a difficult task for us, in part because of the vibrant market of so-called shell companies. They are listed firms without a material business. Instead of being delisted, they are often the targets of reverse takeovers, also known as backdoor listings, engineered by other nonlisted companies that keep these shells alive.

The exchange is determined to forge ahead, though. We plan to adopt reasonable accounting indicators to decide which companies must be delisted. If companies do not have sustainable profits or forge their accounts, for instance, the exchange will delist it.

Meanwhile, the exchange will also investigate questionable initial public offerings and information disclosures, and demand compensation on behalf of investors.