Alipay Wants to Cut Out Lines at Hospitals 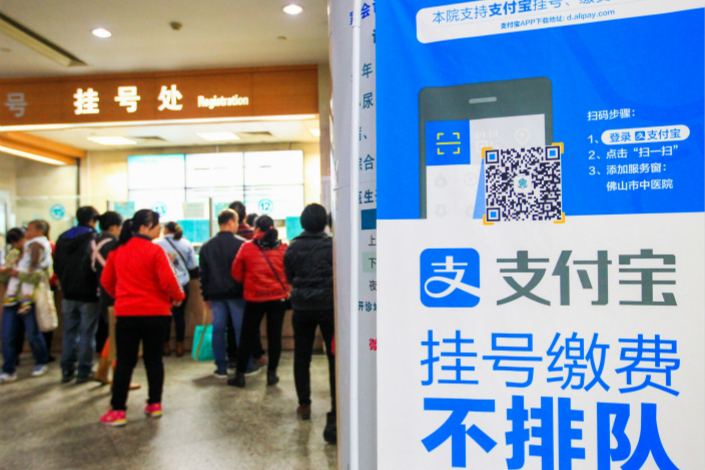 While Huashan Hospital is the first to make use of an online payment platform's credit system to improve efficiency, patients can already pay using such platforms in several other hospitals, such as the pictured hospital in Foshan, Guangdong province. Photo: Visual China

Alibaba affiliate Ant Financial has launched a new service at a Shanghai hospital to allow users of its Alipay online payment platform to see a doctor without having to line up to pay.

Under the new service, Alipay users with a credit score above 650 on Ant Financial Services Group’s Sesame Credit, qualify for 1,000 yuan ($150) in credit at Shanghai’s Huashan Hospital Affiliated with Fudan University, the online payment platform said on Tuesday. These users can use the credit to pay for any medical fees incurred at the hospital.

Alipay’s goal for the credit line is to cut down on the inefficiency for which hospitals in China are infamous. Chinese patients have long complained about waiting in lines for hours to get an appointment to spend 10 minutes with a doctor.

Alipay estimated that the service could reduce the amount of time patients wait in line by 60%.

Huashan Hospital is the first to make use of a credit system for patients. Alipay has said that it will soon be able to expand the credit system into other hospitals in more than 10 cities, including Shanghai and Guangzhou.

Unlike businesses such as movie theaters and restaurants, hospitals in China have been relatively slow to embrace third-party payment services, which China’s leading internet companies Alibaba Group Holding Ltd. and Tencent Holdings Ltd. got into in 2014.

Tencent’s WeChat has leveraged its popularity as the country’s preeminent social media platform to quickly embed its WeChat Pay online payment platform into hospitals, which found it useful to set up public WeChat accounts for their patients.

However, cooperating with online payment platforms poses challenges for hospitals due to concerns about their patients’ privacy and personal information.

Those concerns have meant that it takes longer to get payment platforms set up in hospitals.

Wang Bo, a manager from Ant Financial Services Group reckoned that it takes up to two months to get Alipay set up at a hospital, as opposed to only a week for businesses such as movie theaters.