Automaker Gets Green Light to Road-Test Driverless Cars in California 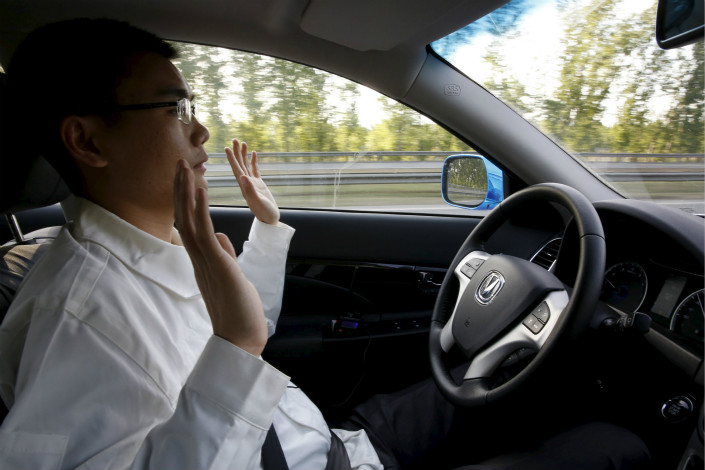 Automakers are looking to take advantage of internet companies' big data and mapping expertise. Changan has partnered with firms such as Huawei, Baidu, Tencent, Alibaba and Intel to build 'smart cars.' Pictured is a Changan engineer road-testing a driverless car on a Beijing highway. Photo: Visual China

Chinese automaker Changan has received clearance to test autonomous vehicles on public roads in California, a company executive said over the weekend.

Manufacturers that apply for a license need to undergo simulations of complex traffic scenarios to ensure they can safely operate on public roads, according to the state’s compliance authority. In addition, manufacturers are also required to put down a $5 million security deposit with the government.

Early in 2016, Changan Automobile (Group) Co. Ltd. completed a 2,000 kilometer (1,240 mile) road test from the southwestern metropolis of Chongqing to Beijing, said Li Wei, one of the company’s vice presidents.

Much like the electric vehicle industry, which has benefited from government incentives, autonomous driving has also been identified by the central government as an industry it wants to support so domestic companies can leapfrog their Western competitors.

Internet titans including Baidu Inc., Alibaba Group Holding Ltd. and Tencent Holdings Ltd. have sought closer ties with traditional automakers to break into the business. In August, Baidu and Anhui Jianghuai Automobile announced plans to roll out a semi-autonomous car by the second half of 2019.

For their part, the automakers want to take advantage of the internet companies’ technological expertise, particularly with big data and mapping. Changan has formed partnerships up with technology giants such as Huawei Technologies Co. Ltd., Baidu, Tencent, Alibaba and Intel Corp. to develop “smart cars,” Li said.

Despite the government push, China remains in the slow lane of road-testing driverless vehicles because the country’s existing laws don’t allow it.

In July, a video of Baidu CEO Robin Li testing an autonomous vehicle on Beijing’s Fifth Ring Road — with his hands off the wheel — set off a debate about whether the excursion was legal.

However, in September, the Ministry of Industry and Information Technology said that it was working on regulations to give the green light for driverless car companies to conduct tests on public roadways in the future.

A source close to the ministry has told Caixin that an outline of road-testing rules for unmanned vehicles has been completed, though there was not yet a clear timetable.

Industry experts have called on Beijing to remove more obstacles in existing laws to speed up the development of autonomous driving. There are more than 20 regulations holding back the development of the technology, according to Wu Xuebin, a Baidu executive.

Wu said autonomous driving technology should be a priority on par with artificial intelligence. He predicted 2025 would be a turning point for the technology, which would then enter mass production around 2050.