By Zhang Erchi, An Limin and April Ma 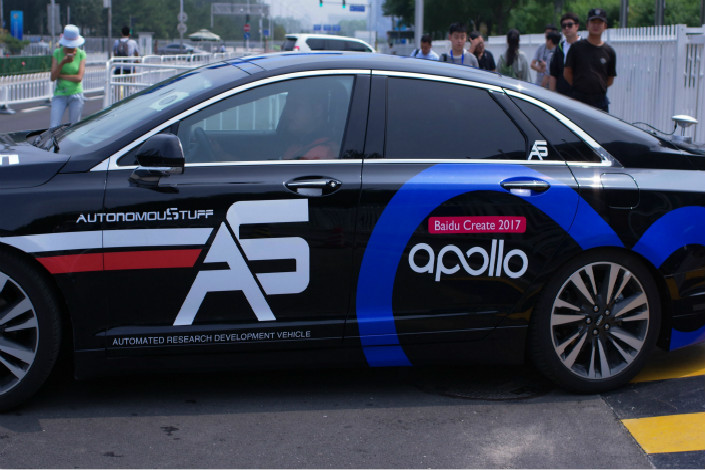 Four months after the launch of its “Apollo” program, Internet giant Baidu is preparing to roll out its first mass produced self-driving car in partnership with Anhui Jianghuai Motors in 2019. Photo: Visual China

Baidu and JAC, which originally specialized in manufacturing trucks and utility vehicles, plan to roll out a partially self-driving car by the second half of 2019, the two companies announced Tuesday at an event in Shanghai.

Mass production will begin once the car gains the necessary government approvals, they said.

The car will be able to achieve level-three autonomy, which means that the driver will sometimes have to take the wheel but won’t need to keep a strict eye on the road, said Li Bingwei, JAC’s head of electric engineering.

There are five levels of autonomous driving. Level one means that certain functions, such as acceleration, may be turned over to the computer. At level five, the computer’s driving is on par with that of a human, and will be able to handle all road conditions. Some in the industry, such as Ford Motor Co. autonomous expert Jim McBride, believe the crucial demarcation is between levels three and four.

JAC and Baidu’s autonomous model will be built for an electric vehicle model still on the drawing board.

Many questions remain about the government’s readiness for driverless vehicles, given the gridlock that drivers so often experience in major cities.

China’s Ministry of Industry and Information Technology last month concluded a public comment period for setting guidelines with technical standards for the self-driving car industry. The ministry’s short-term goal is to establish 30 sets of standards for things such as vehicle safety, information security and sensors.

It aims to have 100 specifications in the books by 2025 as more sophisticated technology is developed.

There are no existing laws or regulations for driving unmanned vehicles on public roads. A July video of a Baidu employee road testing an autonomous vehicle on Beijing’s Fifth Ring Road — with no hands on the wheel — set off a debate about whether the excursion was legal.

Municipal transportation authorities later responded that they supported the development of autonomous driving, but wanted to look into the legitimacy of Baidu’s test drive.

The news came four months after Baidu initiated a project called “Apollo” by seeking partners that will contribute data and hardware to help the Chinese search giant develop and manufacture an autonomous vehicle.

But Baidu’s search for a loyal partner in its journey toward a driverless car has hit a few bumps on the road. Although Baidu stated last month that more than 50 car part suppliers and auto manufacturers were prepared to participate in the Apollo program, people familiar with the matter tell Caixin that talks with many of these companies are still in the initial stages because they are reluctant to hand over their data and technical expertise to Baidu.

In late November, Baidu and its former collaborator in a self-driving car venture, BMW AG, went their separate ways, little more than a year after they announced their partnership to bring the German automaker’s driverless cars to China by 2018.