After Slow Start, New-Energy Carmakers Accelerate Into Second Half of 2017 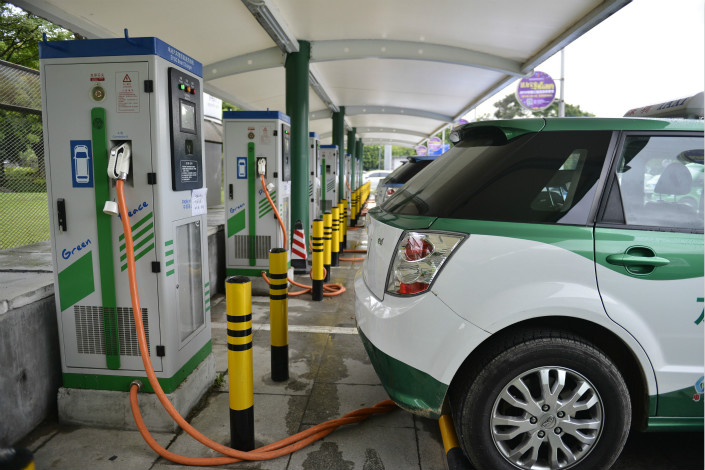 BYD, China’s leading new-energy car manufacturer, reported that its new-energy vehicle sales fell about 18% year-on-year in the first half of 2017. Above, a BYD vehicle charges its battery in Shenzhen in July 2016. Photo: Visual China

A host of policy changes at the start of 2017 dampened sales for China’s new-energy carmakers in the first half of the year, but improving conditions and growing clarity since spring are leading manufacturers to predict strong momentum into year-end.

The first-half weakness showed up in results for BYD Co. Ltd., China’s leading manufacturer, which reported that revenue from its new-energy car business rose just 2.1% in the first half of the year to 15.6 billion yuan ($2.4 billion), accounting for about a third of its revenue. The actual number of new-energy vehicles sold fell to nearly 40,000 in the six through June, down about 18% from the first half of 2016. That weak performance dragged on BYD’s profit, which sank 24% for the period.

“In the first half of 2017, under the influence of policies such as the scaling down of subsidies and policy adjustments which changed the qualification requirements for the subsidies, the sales of new-energy automobiles of the group experienced a year-on-year decrease to a certain extent during the period,” BYD said in a statement with its interim results.

But even that growth was less than half the rate for all 2016, when the government began an overhaul of a subsidy system that was designed to promote the sector, but instead resulted in widespread fraud from both manufacturers and buyers. The former group took advantage of state grants to boost their income, even as they developed cars that sometimes never entered mass production. The latter group often purchased cars to get similar subsidies, even though they never intended to drive them.

To remedy the situation, the government forced carmakers to re-register all their models with the government after the end of last year, saying only models that met its standards could be sold. At the same time, it rolled out a new policy requiring all vehicles to be driven for at least 30,000 kilometers before buyers could collect government rebates and other subsidies.

“The entire country’s new-energy carmakers are facing similar challenges,” said the sales manager at a midsized carmaker, speaking on condition of anonymity because he wasn’t authorized to speak to the media. “One of the main reasons is the 30,000 kilometer restriction. In addition, the new-energy car industry has already entered into a kind of cycle where a big portion of sales come in the second half of the year.”

He added that his own company’s sales were weak in the first half of the year, but declined to give specifics.

The latest monthly data showed that after the slow start to the year, sales industrywide are slowly gaining momentum as more cars receive government approval and the broader system overhauls start to take effect. Following the central government’s lead, many local governments are also adjusting their own local incentive programs, and many of their newer plans are only now being rolled out.

As that happens, sales growth has been accelerating, reaching 34% in June and zooming ahead by 55% in July, according to the automobile association’s data.

BYD Chairman Wang Chuanfu said that his company’s own sales have been recovering since April, and returning to a growth track. He added his own belief that retirement of the old subsidy system was positive, despite short-term difficulties, and would help the industry’s development over the longer term.