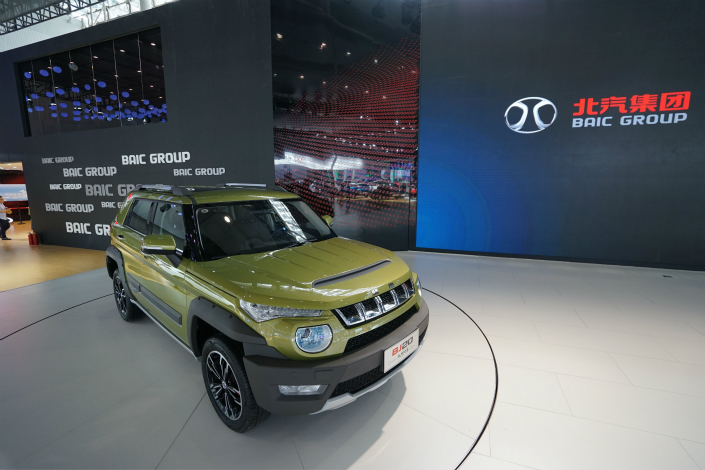 The new-energy vehicle unit of BAIC Motor, the China joint-venture partner of German giant Daimler AG, has raised 11.1 billion yuan ($1.66 billion) in new funds, as it eyes an eventual separate listing in Hong Kong or on the Chinese mainland, executives said.

The new funding comes just a month after Daimler announced its own major new tie-up with BAIC in new-energy cars, in its own rush to build up that part of its China business in line with new policies by Beijing. BAIC has been one of China’s most aggressive domestic companies in answering Beijing’s call to build up the sector, and is now the nation’s leading seller of pure electric cars.

The new funding came from 14 investors, and valued BAIC BJEV at 28 billion yuan, company executives said at an event on Monday. Investors in the new round included distressed-asset manager China Cinda and Zhongji Investment.

BAIC, which itself is listed in Hong Kong, is considering listings for the unit in Hong Kong, as well as the Chinese mainland’s own markets in Shanghai and Shenzhen, said board secretary Hu Gewei. He added that market conditions and sentiment among the company’s stakeholders would dictate the timing of such an offering.

BAIC officials said Daimler hasn’t been among key investors in BAIC BJEV to date, but was planning to make an announcement about such plans as soon as next month.

Daimler is just one of many domestic and foreign automakers racing to prepare for a difficult set of targets for sharply boosting their new-energy car sales under a new plan from Beijing, which wants to clean up the country’s polluted air and foster development of such cutting-edge technology.

The latest version of the plan gave quotas of 8%, 10% and 12% for car producers for the years 2018, 2019 and 2020 respectively. The percentages are derived from complex calculations related to emissions levels for each manufacturer’s total car output in a given year, but are not a direct percentage of its total vehicles that are new-energy cars.

BAIC is China’s leading maker of pure electric vehicles, selling 30,000 such vehicles last year and targeting 170,000 for 2017. But the company only sold 36,000 in the first seven months of the year, as Beijing sharply rolled back government incentives to promote the sector. That has prompted it to reconsider its 2017 target, according to Deputy General Manager Zhang Yong.