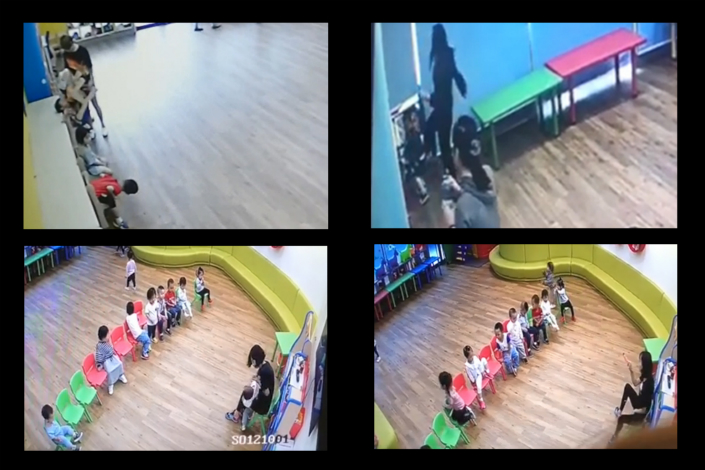 In video footage spanning four months, parents found 61 occasions in which children were allegedly mistreated at Ctrip’s day care center for employees in Shanghai. The pictured screenshots, taken from closed-circuit television footage of the day care center, show examples of alleged mistreatment. On the upper left, a day care center teacher pins a child to a shelf with a chair. On the upper right, a teacher kicks a child. On the lower left, a teacher feeds what parents suspect is the bitter herb wasabi to a child. Photo: Caixin

One clip on the Chinese social media site Sina Weibo shows a woman forcefully wrenching a schoolbag from a small girl’s back and hurling it to the floor before pushing the child toward a table. The child falls and hits her head on the edge of the table.

The day care center looked after more than 110 children under the age of 3 and was affiliated to China’s largest online travel company Ctrip. The company, among a handful in China to offer day care facilities for employees’ children, has apologized for its failure to monitor operations at the center.

The scandal sheds light on how the lack of national standards could lead to lapses in oversight at the country’s day care centers, creating room for abuse. It also highlights challenges facing employers who try to offer affordable child care services for staff in a market fraught with red tape.

Surveillance footage uploaded by angry parents also shows a female teacher slapping a crying girl across her face in the presence of three other teachers who didn’t bother to intervene.

Ctrip has confirmed the authenticity of the video clips and the company said in a statement on Thursday that it first received complaints about abuse when a parent reported that she had found bruises on the ears of her child on Nov. 3.

The parent, whom Ctrip didn’t identify, had confronted the company’s human resources department and was later given access to footage from close circuit television (CCTV) cameras inside the center. The facility was run by a private preschool manager recommended to Ctrip by the Shanghai Women’s Federation, a government-backed institution advocating for rights of women and children.

As other parents, shocked by the revelation, rushed to look through the videos, they found widespread abuse at the child care center located inside Ctrip’s headquarters in Shanghai.

In CCTV footage spanning over a period of four months, parents found that children were mistreated or abused on 61 occasions. Incidents included children being slapped on the face and kicked by their teachers, said one parent, who asked not to be named because she is still employed by Ctrip.

Footage recorded on Nov. 2 showed another teacher cornering a boy before kicking him and later lifting him up and throwing him to the ground as two other teachers looked on.

In footage dated Sept. 20, a teacher sitting on a child’s chair was shown locking a boy between her legs and forcefully turning his head towards her and squeezing an unidentified paste out of a tube and smearing it on the boy’s face and mouth.

Local police, on Nov. 8, detained three suspects including the head of the day care center, according to a Ctrip statement. When contacted by Caixin, police refused to identify the substance the children were fed because the investigation was still ongoing.

But one child told his parents that his teacher fed him with something that tasted like “spicy poison,” according to one parent, who suspected the substance was wasabi, the condiment that has a lingering, burning aftertaste.

It may have been given to intimidate the children, said the parent, who wished to remain anonymous.

Hygiene standards at the center were also “appalling,” according to several parents interviewed by Caixin. In the footage, one teacher was shown feeding several children with one spoon and wiping their faces with one napkin, according to one parent who saw the video.

Ctrip offered an apology over the findings, saying “it feels deeply ashamed for letting down employees and their families who put their trust in the company.” Its human resources department failed to randomly check CCTV footage for inappropriate behavior by teachers as required, it admitted.

The company has also promised to provide parents with assistance to send all children to hospitals for medical check-ups. It also offered counseling services for parents and children.

Ctrip, which employs about 10,000 workers in Shanghai alone, had planned to set up a day care center for the children of its employees in 2015, but was unable to do so because it couldn’t meet government requirements for such facilities, according to Shi Qi, a vice president of Ctrip.

For example, a kindergarten for roughly 400 students in downtown Shanghai is required to have a space of 6,660 square meters (71,687 square feet), or roughly the size of a soccer field, according to a government standard on kindergarten.

This isn’t viable for companies such as Ctrip, which have offices in high-rise buildings, the People’s Daily reported earlier, quoting Qian Kun who managed the day care center at Ctrip.

The company was able to get the plan off the ground with backing from the Shanghai women’s federation. The facility, which opened in February 2016, has been run by a private preschool operator affiliated with a magazine published by the federation, Caixin found.

Ctrip said it decided to go with the private pre-school named For the Children, because it was recommended by a branch of the Shanghai women’s federation in the city’s Changning district.

Ctrip provides the premises and parents who send the children to the day care center were only charged 2,580 yuan a month, about half the price for a comparable private facility in the city.

Shanghai women’s federation has condemned the abuses. But it failed to respond to allegations leveled against the private preschool by some parents who said it had hired unqualified teachers.

The day care center for Ctrip staff was earlier seen as a model for other private companies. A team of researchers from State Council’s National Working Committee on Women and Children toured the day care center in April, because the center was seen as a successful case study on how employers could support parents juggling work and child care.

There is a severe shortage of affordable care for toddlers under the age of 3 in China, according to an earlier article by Liang Jianzhang, the co-founder of Ctrip. Less than 1% of children in this age group able to attend day care centers.

There have been sporadic reports of children being mistreated at poorly managed or substandard preschools in the country.

Just as the fallout from the Ctrip scandal spread, a teacher at a private kindergarten in Nanjing, in the eastern province of Jiangsu, was put under investigation for beating up a 3-year old toddler on Nov. 8, according to local media reports.

Beijing Normal University professor Feng Xiaoxia said that most day care centers in have been operating in a legal grey areas because the country lacks regulations or industry standards for aspects like teacher qualifications. The regulatory hole leaves children vulnerable to abuse or mistreatment, according to Feng and several other educators.

It’s time to establish some basic national standards that can be easily enforced to protect children, Feng said.