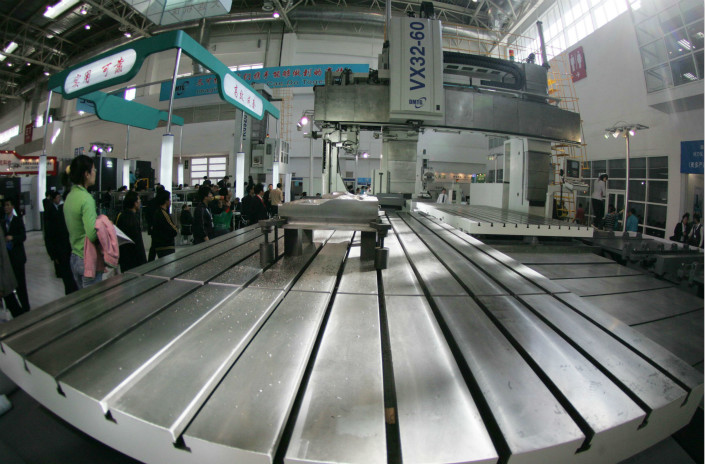 Dalian Machine Tool Group Corp. had a net profit margin of only 3% for the first nine months of 2016, the latest data the company has released. Above, visitors of the 11th China International Machine Tool Show in Beijing inspect equipment manufactured by Dalian Machine in April 2009. Photo: IC

The Intermediate People’s Court of Dalian, in Northeast China’s Liaoning province, accepted a petition from Dalian Machine’s creditors on Friday that requested the machine-tool maker restructure its debts and businesses.

Dalian Machine has been struggling with debt for almost two decades. In 1999, the company managed to dispose of some debts via a debt-for-equity swap, and then write off nearly a third of its remaining debts in the following years.

However, low profitability — and the resulting insufficient cash flow — kept the company in a rut for years. Dalian Machine — one of China’s “zombie,” or economically unviable, businesses — had a net profit margin of only 3% for the first nine months of 2016, the latest data the company has disclosed.

As China’s economy transitions to labor-intensive light industries, traditional heavy industries that are already pressured by overcapacity are finding it increasingly difficult to survive. Moreover, as part of the government’s ongoing campaign to deleverage the credit-fueled economy, zombie companies are among the first to be cut off from lending, pushing them to the brink of collapse.

In December, the firm began defaulting on what is now 3.8 billion yuan ($572 million) worth of bonds. And as of Oct. 30, it had unpaid bank loans of 8.34 billion yuan. Involved commercial lenders and trust companies include Industrial Bank Co. Ltd. and Ping An Trust Co. Ltd.

Dalian Machine had incurred 18.1 billion yuan in debt at the end of the third quarter in 2016, which represented 77.08% of its total assets in 2015, according to the company’s financial statement.

In the first three quarters of 2016, Dalian Machine merely reported 9.33 billion yuan in revenue while its total operating costs hit 9.05 billion yuan. Dalian Machine has not disclosed any financial figures after the third quarter of 2016.

After the company violated other information disclosure rules related mainly to its credit situation, China’s National Association of Financial Market Institutional Investors, a self-disciplinary organization in the interbank bond and other over-the-counter markets, said in August that it would temporarily ban the company from using fundraising tools.

In late August, bankrupt Dongbei Special Steel Group Co.’s restructuring plan was approved by the Intermediate People's Court of Dalian, in which creditors would either accept a 20% debt repayment ratio or a debt-for-equity swap.

Before that, Liaoning’s provincial government fought a long and often-acrimonious battle with the creditors of Dongbei Special Steel, a state-owned specialty steelmaker, which owed more than 55 billion yuan, including 44 billion yuan to banks. Creditors told Caixin their interests were being ignored as desperate officials sought to save the company.