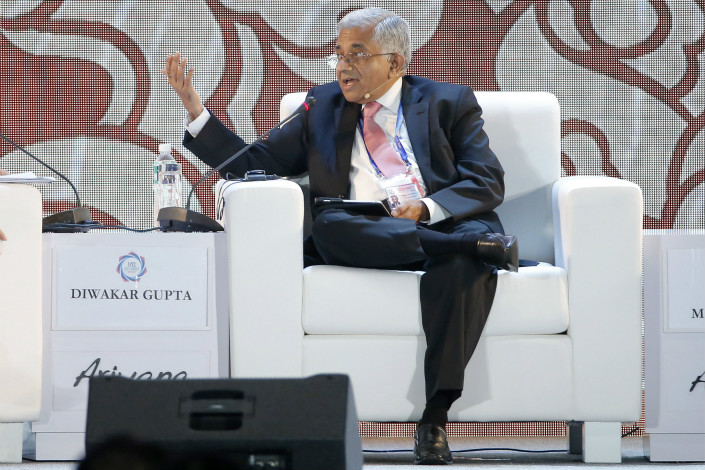 Asian Development Bank Vice President Diwaker Gupta told Caixin that "the demand for infrastructure in emerging Asia and the Pacific is so huge, that we do not see any conflict of interest with other multilateral development banks including the AIIB, in growing our business." Photo: IC

(Danang, Vietnam) — Since China led the establishment of the Asian Infrastructure Investment Bank (AIIB) in 2015, there has been discussion about its possible competition with the Asian Development Bank (ADB), which since its founding in 1966 has been led to a significant extent by the U.S. and Japan.

Diwakar Gupta, ADB vice president, said the Asia-Pacific’s demand for infrastructure is huge, and there is no conflict between the AIIB and the ADB in meeting this demand. The two banks have cooperated with each other in some projects, Gupta told Caixin in an exclusive interview on the sidelines of the Asia-Pacific Economic Cooperation summit in Da Nang, Vietnam last week.

Gupta also said the ADB would like to cooperate with China on its Belt and Road Initiative, which aims to drive economic development through infrastructure investment.

An ADB report released earlier this year said $26 trillion will be needed to meet infrastructure demand in the Asia-Pacific between 2016 and 2030.

Caixin: Demand for infrastructure construction in Asia is huge. The ADB has cooperation projects with the AIIB in India, Pakistan, Bangladesh and Georgia. When it comes to competition, in what ways will these two organizations compete? How can we ensure healthy competition?

Diwakar Gupta: Thank you, that is a very interesting and relevant question. We in the ADB promote efficient markets in all of our DMCs (developing member countries), including healthy competition. We live by that principle, and therefore also welcome competition with our own activities. That said, the demand for infrastructure in emerging Asia and the Pacific is so huge, that we do not see any conflict of interest with other multilateral development banks including the AIIB, in growing our business. In fact, there is (a) wide scope to collaborate and exchange knowledge, which will be to the overall benefit of our clients in the DMCs. I see that the ADB and AIIB will, in fact, complement each other by increasing joint interventions, which is already evidenced (by) four ADB-AIIB co-financed projects.

Caixin: The ADB has provided $34 billion in loans to China over the last 30 years. Although the gap between rich and poor in China is still large, and there are still weaknesses in the areas like pollution control, the economy has developed. Will the ADB change how it supports China in the near future?

Gupta: The People’s Republic of China is one of ADB’s key stakeholders, and (is) indeed (a) recipient of support, both in terms of sovereign and non-sovereign interventions, and knowledge. You mention pollution control, so I would like to mention that we have in recent years had very good cooperation with both the government of (the) PRC as well as important private sector clients and SOEs to support important initiatives in climate change mitigation and adaptation. I can mention the $500 million ADB funding for the Green Financing Platform with the China National Investment and Guaranty Corporation to promote air pollution-reduction investments in the greater Beijing-Tianjin-Hebei (region); investments in agricultural waste-to-energy and renewables projects; funding for 5,000 low-emission buses running on cleaner fuel including natural gas; as well as electric and hybrid buses.

ADB’s Country Partnership Strategy with the PRC has five pillars: managing climate change and the environment; promoting regional cooperation and integration; supporting inclusive economic growth; fostering knowledge cooperation; and supporting institutional and governance reform. We have a very strong pipeline of projects for both our sovereign and non-sovereign operations to support this in the years to come.

Gupta: As I briefly discussed earlier, the infrastructure funding gap in Asia and (the) Pacific is enormous, at an estimated $1.7 trillion per year. This, naturally, is way beyond (the) ADB’s capacity, so we welcome any and all initiatives that are directed toward providing sustainable infrastructure solutions with a positive development impact in our DMCs. While (the) ADB is intervening in many sectors and themes, fundamentally, we are an infrastructure bank with around 70% of our portfolio directed toward infrastructure projects and policies. Moreover, regional cooperation and integration is one of (the) ADB’s strategic core areas of operations, so we will be happy to work with partners active in this space.

Caixin: The ADB has agreed to provide a loan to China Foundation for Poverty Alleviation Microfinance Management which will be used for microfinance operations in poverty-stricken areas in China. Nowadays, online microloans are quite popular. Does the ADB have any plan to use new technologies in the areas of lending and poverty alleviation?

Gupta: Yes, that is a very good project, which we are both proud of and have high hopes for. We are seeing a very exciting and dramatic shift in the technological environment these days, spearheaded by the finance sector. The ADB has keen interest in new technologies, including blockchain, digital and biometric identity, electronic payments, mobile transactions, etc. While it is still early days, we believe that the fintech developments have the power to transform access to financial products to the large, unbanked part of the population in our DMCs, with significant development impact. I am personally from India, so I like to use as an example the very significant impact of the implementation of the Aadhaar biometric identification system — as part of this scheme, almost 300 million bank accounts have been opened under the associated Jan Dhan-Aadhaar and mobile number trinity, which has led to a significant reduction in the cost of transferring money, and government subsidies can now be linked directly to an individual, eradicating “leakages.”

Caixin: You worked for the State Bank of India for many years, what has been the impact of that experience on your current work?

Gupta: SBI is India's largest bank, accounting for a quarter of the country's banking activity, with a significant presence across the entire gamut of financial services. My four decade-long experience with the various business verticals of SBI has been a great asset for me in grasping the nuances of the ADB’s role, and settling down quickly.