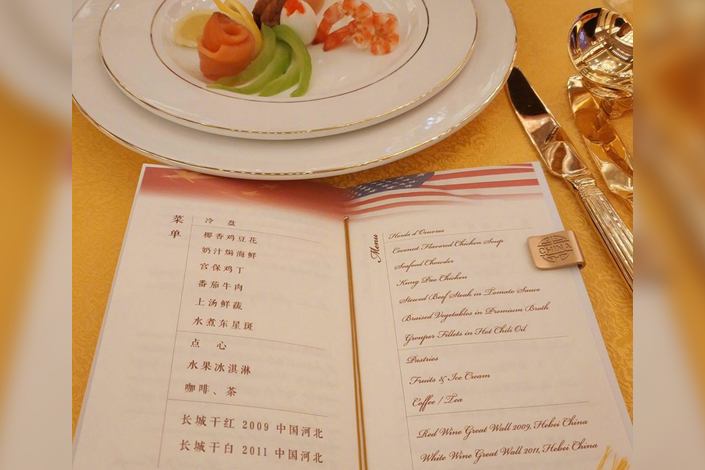 US President Donald Trump praised Chinese leader Xi Jinping on Friday as a “highly respected and powerful representative of his people” on Twitter as he wrapped up his first state visit to Beijing.

China said it has “mapped out a new blueprint” with the U.S. to remain partners, as opposed to rivals, during Trump’s two-night stay in Beijing.

“We both agreed that when we work together, we can accomplish many great things that will benefit our two countries and the world,” President Xi Jinping said during Thursday night’s state dinner for Trump and first lady Melania Trump at the opulent Golden Hall within the Great Hall of the People.

The lavish banquet featured popular Chinese dishes including gongbao chicken, tender beef steak stewed in a tomato broth, as well as locally produced Great Wall wine from 2009, according to a photo posted by Lei Jun, CEO and co-founder of the Chinese electronics manufacturer Xiaomi.

Trump’s packed schedule in China included a serious talk with Xi, a press briefing and an appearance at a discussion between business leaders from both countries. But the tour — billed as a “state visit-plus” by China’s envoy to Washington Cui Tiankai — also featured a tour of the magnificent Forbidden City late on Wednesday and a night at the Peking Opera.

North Korea’s nuclear program was the major focus of the discussion between the two leaders, according to U.S. Secretary of State Rex Tillerson, who briefed the press on Thursday. “President Trump and President Xi affirmed their commitment to achieving a complete, verifiable and permanent denuclearization of the Korean Peninsula,” Tillerson said.

They will “not accept a nuclear-armed North Korea,” he added.

When prodded by reporters over concrete measures China has taken on this front, Tillerson said Xi has shared information on “very specific actions” taken, including closing down bank accounts linked to North Korea.

He also sought to defend Trump for blaming China for the trade imbalance between the two countries. Tillerson instead said previous U.S. administrations had put the country where it is, “whether through benign neglect … or for whatever reasons … allowed it to get so out of balance that now it’s not an easy thing to rebalance.”

The deepening opioid crisis in the U.S. also features prominently in meetings between the two leaders, who pledged to take fresh actions including agreements to control the export of new fentanyl precursors, according to Tillerson. Both countries also agreed to share “intelligence on drug trafficking” and exchange “trafficking information packages to identify individuals and criminal networks responsible for trafficking,” he said.

Talking about the chemistry between the two leaders, Tillerson said it was visible in the openness that existed around the table.

In addition to candid discussions on pressing issues, Xi and Trump also talked about ways to “prevent mishaps, misunderstandings and miscalculations,” according to Tillerson.

In a separate press briefing Thursday, Chinese Vice Minister of Foreign Affairs Zheng Zeguang said that both leaders reaffirmed their commitment to peace, stability and prosperity in the Asia Pacific Region. Both countries also committed to upholding freedom of navigation in the South China Sea, while Xi reiterated China’s unwavering stance on issues linked the sea, Zheng said.

Both countries will strengthen cooperation on cracking down on cybercrime and upholding internet security by adhering to the five-point consensus over cyber security reached in 2015, he said.

Zheng also praised what the two presidents have achieved in business and financial arenas including deals worth $250 billion signed Thursday.

Trump left Beijing Friday morning to attend the Asia-Pacific Economic Co-operation (APEC) summit in Vietnam. But he said in an early morning tweet that his wife Melania stayed behind to visit the Beijing Zoo and tour the Great Wall of China before heading home. She would make a stop Friday in Anchorage, Alaska, in the U.S., to take part in Veterans Day festivities at the Joint Base Elmendorf-Richardson.

Reuters reported that Melania had fed a giant panda named Gu Gu at the Beijing Zoo. She also greeted a group of school children waving miniature Chinese and American flags. The first lady handed out stuffed toy eagles after listening to the children sing a Chinese folk song in front of the panda enclosure, Reuters reported.