5 Things to Know About Trump in China 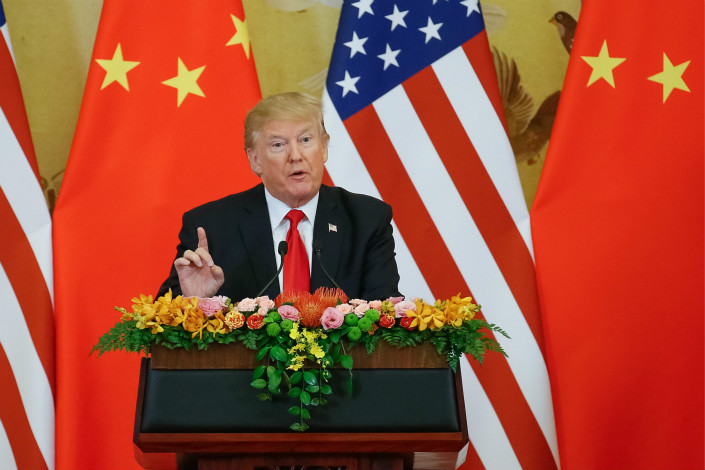 U.S. President Donald Trump speaks to the media during a press conference on Thursday at the Great Hall of the People in Beijing. Photo: IC

Trump’s visit is part of his whirlwind Asia tour that saw him spend three days in South Korea.

Trump will be accompanied by a business delegation that includes the leaders of 28 U.S. companies, including Goldman Sachs CEO Lloyd Blankfein.

China is laying out a red-carpet welcome for the Trump. In what Cui Tiankai, China’s ambassador to the U.S., has called a “state visit-plus,” Trump will be the first foreign leader in the history of the People’s Republic of China to be invited to dinner in the Forbidden City.

Foreign Ministry spokesperson Hua Chunying said the welcome was a way to reciprocate the “considerate” reception the U.S. gave Xi earlier this year. “We Chinese people believe that courtesy calls for reciprocity,” she said.

So far, the hashtag “Trump in China” has been used more than 2 million times on Weibo, China’s Twitter-like social media platform.

During his stay, Trump will tour the Palace Museum, dine with Xi and his wife, Peng Liyuan, and attend a state dinner at the Great Hall of People. He will also attend a series of face-to-face meetings with Xi. What they will talk about is the question on everyone’s mind. Among the media speculation in the run-up to the visit, several issues have emerged as potential topics of conversation.

What issue will top Trump’s agenda?

Shortly before arriving in Beijing, Trump delivered a blistering speech to South Korea’s National Assembly in which he called out China, as well as Russia, as he encouraged world leaders to deny aid to North Korea, Bloomberg reported early Wednesday. The U.S. president called North Korea “a hell no person deserves.”

Specifically, the U.S. wants China to cut off the oil supply to its neighbor. In April 2016, China stopped exporting refined petroleum products like gasoline to North Korea as part the six trade sanctions it slapped on the country. However, China still exports crude oil to North Korea, which Beijing argues is allowed under the U.N. resolution imposing the sanctions. China has also stopped importing North Korean coal and seafood, which are two of the country’s major sources of income.

What issues will Trump be advocating for on behalf of U.S. companies?

Trump is pushing for more market access for pharmaceutical and insurance companies, as well as for U.S. social media giants like Facebook and Twitter, whose services remain blocked on the Chinese mainland, according to U.S. Ambassador to China Terry Branstad. The Chinese side is expected to discuss U.S. restrictions on Chinese acquisitions of high-tech companies. In September, for example, a U.S. chipmaker, Lattice Semiconductor Corp., announced that was scrapping a $1.3 billion deal to be purchased by a China-backed group that included China Venture Capital Fund Corp. Ltd. Lattice announced the deal’s demise shortly after the White House released its own statement that Trump was blocking the plan.

Trump arrived the same day China’s General Administration of Customs released its monthly trade data. The U.S. president has been critical of China for its long-running trade surplus with the U.S. On Wednesday, China Customs reported a trade surplus of 254.47 billion yuan ($38.35 billion) for October.

Its trade surplus with the U.S. came in at $26.6 billion in October, Bloomberg reported.

China response is that it is addressing the issue. Cui said it will take time to narrow the trade gap with the U.S. because it is a “structural problem,” according to a report in the state-run China Daily.

He said China doesn’t want a huge trade surplus, which could hurt the country’s economy in the long run.

If the U.S. could lift some of the restrictions it has on certain exports to China, such as high-tech products for civilian use, it could boost U.S. exports and help achieve more balanced trade between the two countries, Cui said.

The U.S. ambassador to China specifically mentioned drugs as one of the issues on the table. What’s the problem?

In an interview with Chinese media on Monday, Branstad mentioned one area of particular concern was the drug fentanyl, an extremely powerful opioid painkiller. Trump has accused manufacturers in China of producing the “flood” of fentanyl behind the opioid addiction crisis in the U.S., according to Reuters. China disputes the allegation.

China has been very cooperative with the U.S. on the issue, Branstad said. Still, the U.S. is seeking more help to deal with “new derivatives” of the drug that keep appearing in China.

Currently, the U.S. Food and Drug Administration and its Chinese counterpart are working to unearth the sources of the drug and shut down the factories that make it.

More than two dozen U.S. corporate leaders will accompany Trump on the trip. Does that mean we can expect the two sides will reach some headline-grabbing deals?

Branstad said the U.S. anticipates a number of memorandums of understanding to be signed during Trump’s visit. The ambassador skimped on the details, saying only that the agreements will be “many and varied,” with some in the manufacturing and energy industries. One deal that made headlines in the run-up to the trip will allow each country to accept the other’s certifications for new aircraft.

Still, many businesspeople in China have said that reciprocity is still far too lacking in many areas. What’s needed are major structural changes in the way China permits foreign investment through the signing of a long-stalled bilateral investment treaty.