By Qing Ying and Fran Wang 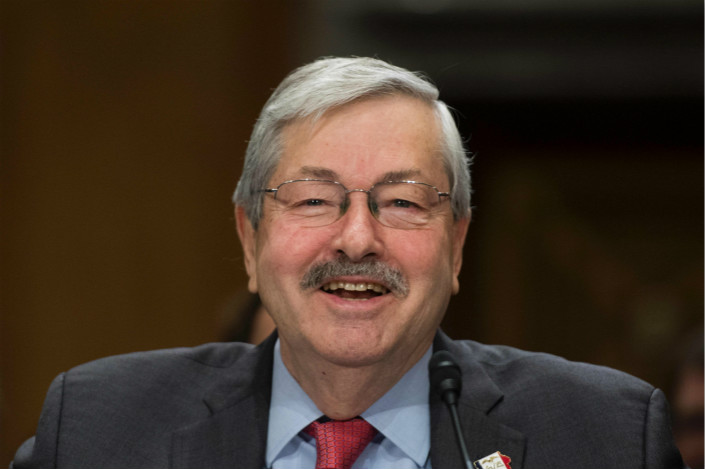 Trade, market access and North Korea will be at the top of President Donald Trump’s agenda when he meets his Chinese counterpart Xi Jinping in Beijing this week, Terry Branstad, the U.S. ambassador to China said.

Talks about “free, fair and reciprocal trade” will be a “very important part” of President Trump’s three-day trip, which begins on Wednesday, Washington’s top diplomat in Beijing told a small group of Chinese reporters on Monday.

President Trump will be accompanied by a business delegation that includes the leaders of 28 U.S. companies, which is “different than (what has) happened in the past on these state visits,” Branstad said, noting that business leaders have not traditionally accompanied U.S. presidents on such occasions.

“We anticipate there will be a number of MOUs (memorandums of understanding) signed during the trip,” the ambassador said.

He did not provide details but said the agreements will be “many and varied,” with some in the manufacturing and energy industries.

Branstad urged China to broaden market access to U.S. business, citing social media and insurance as some of the sectors that Washington is concerned about.

“What we really want is for American companies to have the same access here in China as Chinese companies have in the United States,” he said. “We want to make sure that there is reciprocity and there is opportunity for Americans here.”

Another focus of President Trump’s mission in China will be the denuclearization of North Korea and the Korean Peninsula, Branstad said.

The president is “appreciative of the Chinese cooperation” at the United Nations Security Council in pushing through two major resolutions to impose sanctions on North Korea, which led to bans on imports of coal and seafood into China from the country. Nevertheless, the U.S. believes more needs to be done, the ambassador said.

“We are hopeful that more can be done to increase the pressure and convince North Korea to abandon its nuclear and ballistic missile program,” he said.

Cutting off oil supplies to North Korea, for example, would be “certainly one of the areas that we feel could make a real difference,” he said.

“That could be very helpful in convincing North Korea that they need to abandon this provocative direction that they’ve been taking. So I would expect there will be discussion on that issue between the two presidents,” Branstad said.