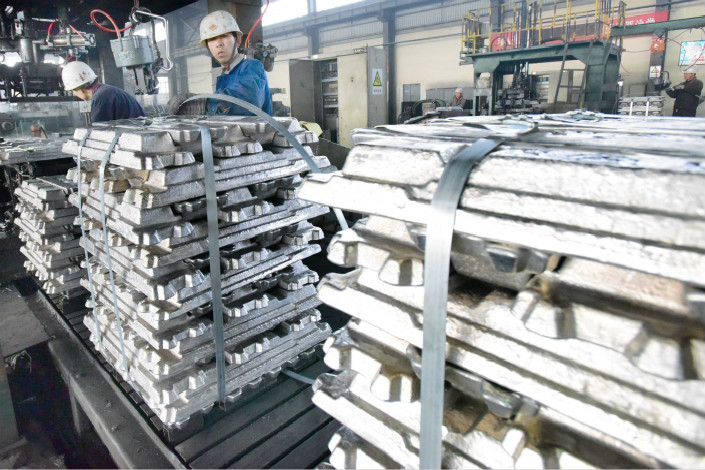 The U.S. decision to impose preliminary anti-dumping tariffs on aluminum foil from China is intended to intensify pressure on Beijing to open its markets further ahead of a meeting between U.S. President Donald Trump and his Chinese counterpart, Xi Jinping, next week, analysts said on Monday.

The Department of Commerce announced on Friday that an initial investigation found that Chinese exporters sold aluminum foil in the U.S. at less than fair value, a practice known as “dumping.” The customs department has been instructed to collect cash deposits from importers of the product from China based on preliminary rates set at 96.81% to 162.24%. If a final ruling, due by Feb. 23, confirms the initial findings and the U.S. International Trade Commission determines that American companies have suffered damage, so-called anti-dumping duties will be imposed.

The Commerce Department’s announcement was made less than two weeks before Trump is scheduled to visit China as part of his tour of Asia. He will arrive in Beijing on Nov. 8 and meet with Xi during his three-day stay, the White House said earlier this month.

“The U.S. announcement of such high tariffs on Chinese products could prove instrumental in upping the pressure on China to make more trade concessions at the upcoming Xi-Trump meeting,” said Xia Tianran, an analyst with CEBM Group, a subsidiary of Caixin Insight Group.

Louis Kuijs, an economist with research firm Oxford Economics in Hong Kong, said trade relations between China and the U.S. remain strained even though “the tail risk of major, large-scale” friction has eased since Xi and Trump met in April in the U.S. and agreed to a 100-day action plan to boost bilateral trade and expand market access for American companies.

The plan led to the reopening China’s market to U.S. beef after 14 years and greater access to China for genetically modified crops and liquefied natural gas from the U.S. China also pledged to further open its financial services sector to U.S. companies.

“The risk of trade tensions always remained, given the thinking on trade in the White House and the fact that China’s bilateral trade surplus with the U.S. has only gone up further this year,” he said. “I would not expect this to be the last measure imposed by the U.S.”

The latest data from China’s customs administration show that the country’s trade surplus with the U.S. rose by 6% in the first nine months of the year to $195.6 billion, with the gap for September a record $28 billion.

Tommy Xie, a Singapore-based economist with OCBC Bank, said the latest tariffs may be “used as bargaining chip to press China to further open its financial market” and that he expects “more noises on trade issues during Trump’s visit.”

But he pointed out that the Commerce Department’s decision is part of the Trump administration’s “America First” policy and that China has not been the only target. The department proposed slapping anti-dumping duties on Canadian private-jet maker Bombardier earlier this month. “China is unlikely to be the sole victim,” he said.

China’s Ministry of Commerce on Saturday expressed its “strong dissatisfaction” over the U.S. Commerce Department’s decision.

“China urges the U.S. to… take concrete action to rectify its wrongdoing,” said Wang Hejun, director of the ministry’s Trade Remedy and Investigation Bureau, in a statement. “China will take necessary measures to protect the lawful rights and interests of Chinese companies and reserves the right to take the issue to the dispute settlement mechanism of the World Trade Organization.”

The Commerce Department has started two investigations into aluminum foil exports from China. One focused on whether Chinese companies were receiving state subsidies and the other on whether the product was being dumped in the U.S. market. Both were announced at the end of March, days before Trump hosted Xi at his Mar-a-Lago resort in southeastern Florida.

The preliminary results of the investigation into subsidies were released in August and found that exporters received state subsidies of 16.56% to 80.97%. U.S. customs officials were instructed to collect cash deposits from importers based on those rates.

China was the largest supplier of aluminum foil to the U.S. market last year, accounting for more than 70% of all imports. The U.S. aluminum foil industry supports more than 20,000 direct, indirect and induced American jobs and $6.8 billion in economic activity, according to The Aluminum Association, an Arlington, Virginia-based trade group.