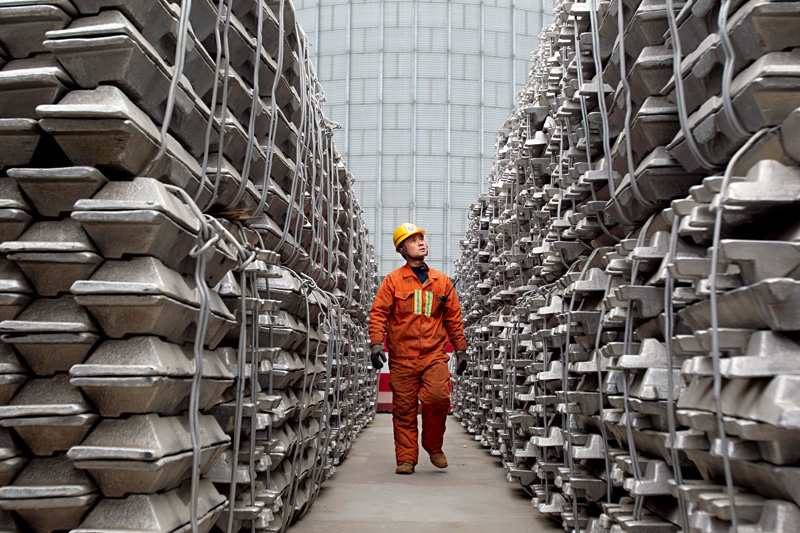 Aluminum Corp. of China, which has a plant in the Guangxi Zhuang autonomous region (pictured), issued a statement on Aug. 9 warning of “investment risks” after the spot price of aluminum in Shanghai jumped by 4.03% in a single day on the back of a rally in aluminum prices. Photo: Visual China

(Beijing) — China’s aluminum industry is being hit by a double whammy — forced closures of unapproved plants to curb overcapacity and heavy cuts in production over the winter months to ease choking pollution. But the bad news has been good news for investors, speculators and some companies.

The price of the metal, which is used in a wide range of industries including aerospace, construction and packaging, has surged in domestic markets as speculators anticipated a repeat of the bull market already seen in coal and steel after the government ordered cuts in capacity and output in those industries. Aluminum traded on international markets has risen on China’s coattails on expectations that the curbs imposed in the world’s largest producer of the metal will push global prices higher.

The spot price of Shanghai-traded aluminum broke through the 15,000 yuan ($2,270) mark for the first time in nearly nine months in early August and jumped to an almost six-year high of 16,610 yuan per ton last Thursday. Aluminum for three-month delivery on the London Metal Exchange has increased 11.5% since the beginning of August and hit $2,177 a ton on Sept. 20, the highest in five years.

“The current market boom is not being caused by (changes in) the relationship between supply and demand,” Wang Qiang, an industry insider close to policymakers, told Caixin. “It’s being caused by speculation funded by borrowed money.”

The trigger for the rally appears to have been media reports in early August that China Hongqiao Group, the world’s biggest aluminum producer, had shuttered five unauthorized plants with combined capacity of 2.68 million tons on the orders of the Shandong provincial government. The privately owned and indebted company, whose Hong Kong-listed shares have been suspended since March amid allegations of overstated profits, finally confirmed the reports in an Aug. 15 statement and said the affected plants accounted for 29% of the group’s total aluminum capacity.

Aluminum Corp. of China (Chalco), the Hong Kong-listed unit of the country’s biggest state-owned aluminum producer, issued a statement on Aug. 9 warning of “investment risks” after the spot price of aluminum in Shanghai jumped by 4.03% that day, the largest one-day increase in nine years. In the six trading days through Aug. 9, the price had jumped by 10.7% and Chalco’s shares had soared by 23% to HK$6.01 (77 U.S. cents).

“National policies have been favorable for the industry recently,” the company said. “However, power prices may push up our costs … and market uncertainties remain.”

It also noted that its share price had jumped by 81% since the end of 2016. But its stock price kept rising and peaked at above a six-year high of HK$7.25 on Sept. 21, before falling back.

Growth of a glut

China is the world’s biggest producer of aluminum, and accounted for 59% of global output in the first half of 2017, according to data from Chalco. The industry has suffered from overcapacity for more than a decade as companies have raced to add new plants. China Hongqiao Group, which is controlled by billionaire Zhang Shiping, has increased its capacity to 9.15 million tons from 2 million tons in 2012.

The slowdown in economic growth over the last six years led to a supply glut, a slump in prices and a collapse in profits. The alumina, aluminum and recycled aluminum businesses lost money for four straight years after 2012, Beijing-based metals information provider Antaike said in a report in January.

Desperate aluminum producers scaled back output at the end of 2015 in a bid to boost prices, which Antaike described as the “largest cutback in nearly seven years.” As a result, production of the metal rose by only 1.3% in 2016 to 31.87 million tons, collapsing from 2015’s growth rate of 11.3%, NBS data show.

Production is still outpacing demand, however. In the first half of this year, total output jumped by 20.9%, while consumption only rose by 11.5%, data cited by Chalco show.

The damage inflicted on the aluminum smelting industry by the surge in capacity made it an obvious target for a sweeping national campaign that began in early 2016 to cut excess capacity in a number of heavy industries. Coal and steel were the first to go under the knife. The government’s policies triggered a bull run on commodity exchanges as speculators piled in on expectations that capacity cuts would lead to shortages and boost prices, even though demand was barely increasing. They also led many companies to restart production to take advantage of the higher prices.

Investors expected the same to happen with aluminum. The government finally unveiled its proposals for the sector this April, when four government bodies, including the National Development and Reform Commission (NDRC), China’s top economic planning agency, and the Ministry of Environmental Protection issued the Notice on the Action Plan to Stop Unauthorized Projects in the Electrolytic Aluminum Industry, known as Document 656. The notice ordered all plants built or under construction since 2004 without the full spectrum of official approvals or that did not register with the relevant government departments to be shut down by Oct. 15.

Aluminum producers were told to carry out internal reviews to estimate how much capacity they needed to cut and report it to the government, which conducted random inspections by mid-September. Companies were then given until the Oct. 15 deadline to implement “corrective action.”

Figures supplied by producers contained in an internal circular seen by Caixin show unauthorized plants that need to be closed under Document 656 amount to 12.84 million tons of aluminum smelter capacity — 6.1 million tons of capacity already built and 6.74 million tons under construction. That would amount to around 29% of Aladdiny’s estimate of China’s total capacity at the end of April.

Companies and investors were initially skeptical. Although the government had been warning about overcapacity as far back as 2002 and since 2013 had published at least six decrees at the national level in an effort to reduce capacity, in reality there was little action and new plants mushroomed.

But by August, when news of the closure of Hongqiao’s unauthorized plants emerged, it was clear the authorities were serious. Shandong province’s economic planning agency also told Shandong Xinfa Aluminum Group, another privately owned manufacturer, to cut 530,000 tons of capacity built without government authorization.

“This year has been different — we have had to follow the (government’s) orders to shut down (unauthorized plants),” an executive with Xinfa Group told Caixin. “There is no room for bargaining and we must carry out the instructions 100%. Both the municipal and the provincial governments have imposed tough requirements.”

In addition to the capacity cuts, the industry is facing a separate broadside from the government’s drive to lower the toxic air pollution that chokes vast swathes of the country, especially in winter. In February, authorities led by the Ministry of Environmental Protection required 28 cities in northern China to reduce their aluminum production by at least 30% for four months starting from Nov. 15. Last month, the period was extended to five months starting from Nov 1.

Aluminum smelting plants in these cities have a combined capacity of around 12 million tons, according to an internal document seen by Caixin, accounting for 27.5% of the country’s total capacity based on Aladdiny data.

It’s not clear what the impact on output will be in reality, however. The ministry did not specify whether the 30% cut would be applied to capacity in place before the execution of Document 656 or to capacity after the closure of unauthorized plants.

Zhang Haolong, an official with the Ministry of Environmental Protection, told Caixin that the base figure should be capacity remaining after taking closures into account as the winter curbs are targeting plants operating legally with the necessary government permits, rather than unauthorized factories. If that interpretation is implemented, the policy could exacerbate a potential supply squeeze resulting from the campaign to cut unauthorized capacity.

The investment boom of the past 15 years has left many aluminum producers struggling under a mountain of debt. Weeks before Document 656 was published, Chinese media reports revealed that Qixing Group Co., a privately owned aluminum producer in Shandong and one of China’s top 500 companies, was unable to repay debts of more than 10 billion yuan. The company filed for bankruptcy reorganization in late July and entered formal bankruptcy proceedings in August.

“Qixing Group’s case shows that private companies were only able to grow on the back of credit, which built up huge business risks,” the industry insider Wang told Caixin.

Hongqiao Group has also run into trouble. Its shares have been suspended in Hong Kong since March when the company became embroiled in the scandal over its accounting. Its auditors resigned the following month in a dispute over the need for an independent investigation into the company’s accounts in the wake of allegations by Emerson Analytics, a short-selling research firm, that the company had underreported billions of yuan in costs over several years and overestimated its profitability.

The group is in the process of raising HK$5.49 billion through the sale of shares to a unit of state-owned financial conglomerate CITIC Group, and is aiming to bring in a further $320 million through the sale of convertible bonds, to repay some of its debts. It had borrowings of 15 billion yuan at the end of June and bonds outstanding of 35.5 billion yuan, according to a filing to the Hong Kong stock exchange.

Speculation that government policies will lead to a shortage of aluminum and drive prices even higher may be optimistic even if demand remains relatively robust. Li Jintao, an analyst with commodity and financial futures brokerage First Futures, forecast China’s consumption of aluminum will increase by around 8% this year to almost 35 million tons.

Physical stocks of aluminum at Shanghai Futures Exchange-approved warehouses rose to a record this month, according to exchange data. In addition, the government has allowed new smelters to start production. It has also allowed plants that have been suspended to restart as long as they have been officially approved and meet government standards. Aladdiny figures showed 2.21 million tons of new capacity came into operation in the first half of this year and another 635,000 tons resumed production.

Nevertheless, the authorities’ determination to pursue their goals will ensure that demand and supply are tightly balanced over the next few months, said Shi Fuliang, director of research at Aladdiny.

“The price of aluminum is likely to stay relatively high due to steadily growing consumption, the diminishing number of capacity permits that can be traded, and the strict control over approvals for new capacity,” he said, referring to local government policy that allows companies to sell unwanted quotas for legal capacity to companies that have unauthorized plants, allowing them to become authorized.

That could be good news for markets as they speculate on whether aluminum prices have peaked and are set to correct after the recent rally. Although past performance of coal and steel cannot be taken as an accurate guide to the future, it may be too early to call time on the aluminum boom.

Coal prices measured by the Bohai-Rim Steam-Coal Price Index (BSPI), which tracks domestic thermal coal spot prices at six major ports in northern China, remain elevated in spite of government policies to boost supply after last winter’s shortages, while the average spot price of 25-millimeter (0.98 inches) domestic steel rebar, has risen 19% since mid-April and is up 64% over the past year.