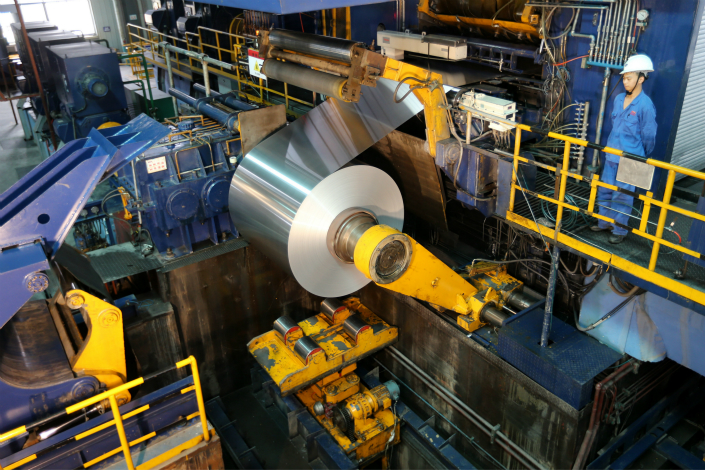 (Beijing) — China has warned the United States to be “prudent” in its handling of an investigation into aluminum foil imports, after Washington said it would seek to impose punitive duties on the product amid growing trade tensions between the world’s two largest economies.

“China urges the U.S. to take action in a prudent manner and make a fair ruling to avoid causing a negative impact on normal trade between the two countries,” Wang Hejun, head of the trade remedy and investigations bureau at the Ministry of Commerce in Beijing, said in a statement on the ministry’s website on Thursday.

Wang said that Beijing was “highly concerned” about the case as well as a separate probe launched by the U.S. in April under Section 232 of the Trade Expansion Act into the impact of aluminum imports on U.S. national security.

The U.S. Department of Commerce published the preliminary results of its investigation into Chinese aluminum foil imports on Tuesday evening, which found China’s exporters received state subsidies of 16.56% to 80.97%. The department will instruct U.S. customs to collect cash deposits from importers of the product from China based on those preliminary rates.

The Commerce Department is due to issue its final ruling on October 24. If it confirms the Chinese companies are receiving subsidies and the U.S. International Trade Commission determines that U.S. companies have suffered damages, so-called countervailing duties, which are aimed at countering the subsidies, will be imposed on Chinese imports.

Wang dismissed the U.S. investigation, saying it was based on “groundless” beliefs that Chinese aluminum and thermal coal suppliers to the aluminum foil industry were “public organizations” and that they provided subsidies to the downstream sector.

China was the largest supplier of aluminum foil to the U.S. market last year, accounting for more than 70% of all imports. The U.S. aluminum foil industry supports more than 20,000 direct, indirect and induced American jobs and $6.8 billion in economic activity, according to The Aluminum Association, an Arlington, Virginia-based trade group.

The punitive countervailing duties, if imposed, are set to fuel trade tensions between China and the U.S. under President Donald Trump, who has taken a protectionist approach of “America First” and vowed to bring jobs back to the U.S.

Chinese producers are facing a further threat from a separate investigation by the U.S. Commerce Department into aluminum and steel imports under a little-used provision in the 1962 Trade Expansion Act which would allow the president to restrict imports on the grounds of national security. While the probe doesn’t single China out, Commerce Secretary Wilbur Ross has said the investigation was partly prompted by the size of Chinese exports to the U.S. In June, China, the European Union, Brazil, Australia, Taiwan and Russia raised concerns about the investigation at the World Trade Organization, Reuters reported at the time.

Trade relations between the U.S. and China are already strained and there are fears they could deteriorate after the Sino-U.S. Comprehensive Economic Dialogue last month yielded few results.

U.S. media reported last week that the White House was preparing to open an investigation into alleged Chinese violations of American intellectual property, amid frustration at what Washington sees as insufficient effort by Beijing to pressure North Korea over its nuclear and ballistic missile programs.