By Zhang Qi and Liu Xiao 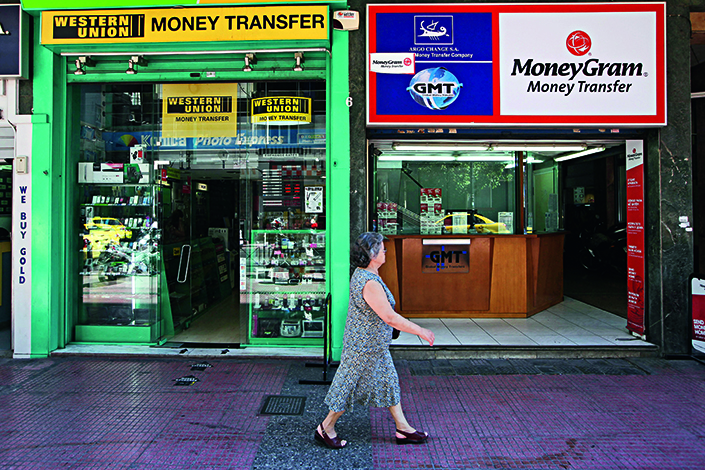 Ant Financial had to resubmit its $1.2 billion plan to take over US-based MoneyGram International to the Committee on Foreign Investment in the United States, the committee that reviews proposals for foreign acquisitions of U.S. companies. The committee has been plagued by delays this year due to staffing problems. Photo: Visual China

The volleys have become more protracted between a U.S. panel that reviews incoming acquisitions and Chinese suitors.

A nod from the Committee on Foreign Investment in the United States, commonly known as CFIUS, is the last mile for non-American companies to clinch deals on U.S. soil. The inter-agency committee, chaired by the Treasury secretary, has up to 75 days to review a deal on national security grounds. If unresolved concerns remain, CFIUS can send a report to the president, who has the authority to prohibit incoming investments.

However, an understaffed CFIUS has rendered the review process unpredictable — and usually longer, several lawyers representing Chinese acquirers told Caixin. Concerns about growing Chinese interest in the U.S., especially in the “sensitive” technology sector, might have also slowed the process, the lawyers said.

Some companies decided to ditch their deals. Hong Kong-based TCL Industries, for instance, gave up its $50 million plan to take over the mobile hotspot unit MiFi from San Diego, California-based Inseego Corp. after refiling twice with CFIUS.

“Now, even 75 days are not enough to assess a case. CFIUS will often come up with a reason to require the company to resubmit their application, which will delay the entire process,” said Sun Chuan, a partner at Morrison & Foerster LLP’s Hong Kong office.

CFIUS concludes most reviews within 30 days, with more complex cases going to an additional 45-day investigation.

Cooley estimated that more than 115 cases were submitted for review during the first half of this year. Last year, there was a record 173 cases, the majority of which involved Chinese investors.

CFIUS has not published an annual report since 2014. The report tallies the number of cases that were abandoned after being submitted to the agency.

Roughly 10% of cases reviewed by CFIUS likely pose a threat to national security, and most of the concerns can be mitigated, said Cooley, who estimated that five or fewer cases last year were abandoned.

Mitigation measures include adding clauses to the contract that ensure only U.S. citizens handle certain products and services, setting up corporate security committees or giving the U.S. government the right to review certain business decisions.

But CFIUS is becoming more skeptical about the effectiveness of complex mitigation, which may affect the number of recommendations it is prepared to make to the president, Cooley said. Fewer resources have pushed CFIUS towards risk aversion, and that makes it difficult for companies to effectively plan and competently predict the timing for completing investments.

And that has caused concerns in the U.S., particularly among lawmakers.

At a forum in Washington in June, CFIUS President and Treasury Secretary Steve Mnuchin said: “Fundamentally we want to keep CFIUS as a national security review, and we want to deal with economic issues separately,” according to multiple media reports.

But some in the U.S. called for a broader role for the review panel.

The second-highest-ranking Republican senator John Cornyn, who accused China in June of “weaponizing” its investments, proposed a bill in the same month to reform what he called an outdated CFIUS framework.

Cornyn called for expanding the scope of CFIUS to include investment in U.S. companies in addition to acquisitions and joint ventures abroad, as these types of cooperation also give foreign companies access to data and intellectual property.

China 2025’s strategy encourages Chinese firms to invest in sensitive technology, especially those related to military uses, Cornyn said. He was citing a report from the Department of Defense that claimed China is investing in key emerging technologies to narrow the technological gap between the two countries.

But others argue by doing so, CFIUS risks becoming a tool of trade protectionism.

For decades, the U.S. has been focusing on expanding overseas investment in a variety of industries and improving access for outbound investments, Theodore Moran, Peterson Institute Senior Fellow, told Caixin. It would be a dramatic shift if it suddenly changed its attitude on incoming investments.

Economic goals such as pushing for more openness in receiving U.S. investments should be achieved through diplomacy — such as through trade representatives, the Commerce Department or bilateral trade agreements — not through CFIUS, Moran said.

It will likely take until the fourth quarter for the GAO to complete its review, Cooley said, adding that he hoped Congress would not make changes to CFIUS until the review is finished.

What are Chinese companies to do?

Chinese companies should make sure they do not have to pay hefty reverse breakup fees if the project is not approved by CFIUS, wrote Grace Fan-Delatour, partner with U.S. law firm K&L Gates. Reverse breakup fees, which are paid by the buyer for terminating an agreement, used to be between 4-5% of the deal size, but have now grown to the 7-8%, Fan wrote.

Not all sensitive deals are turned down by CFIUS, said Bagrin Angelov, an investment banker with China International Capital Corp. Ltd.

Angelov said he believed the panel is an objective committee with no political orientation.

An outright ban on any industry is unlikely, Angelov added, as this would affect U.S. shareholders’ rights and is inconsistent with the U.S. government's approach to business.

CFIUS is much more likely to work with foreign companies to mitigate risks, he said.