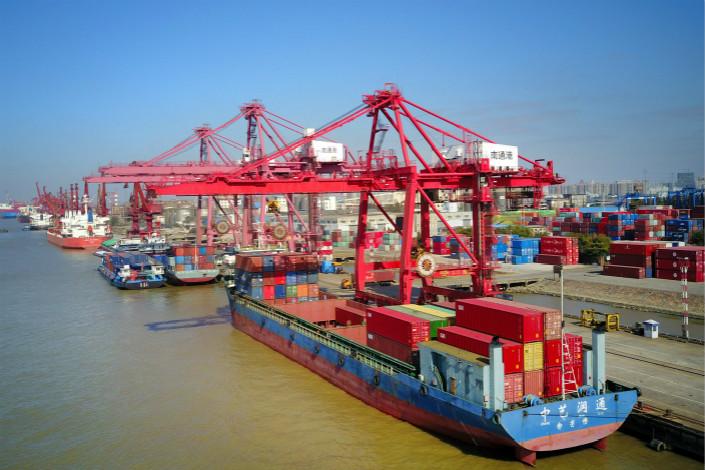 The trade figures were released hours before U.S. President Donald Trump's arrival for a three-day visit to China in which the country's large trade surplus with the U.S. is expected to be a top issue for discussion. Pictured is a port in Nantong, East China's Jiangsu province. Photo: Visual China

Growth in China’s imports remained resilient in October, suggesting demand in the world’s second-largest economy is being sustained in spite of the government’s campaigns to cool the housing market and curb industrial production to reduce pollution.

Inbound shipments rose by 17.2% year-on-year in October to $151 billion, the General Administration of Customs said Wednesday. Although that’s down from an 18.6% pace in September, it compares with a drop of 1.6% in the same period last year.

Exports also held up, rising by 6.9% year-on-year to $189 billion. While that trailed a gain of 8.1% in September, it compares with a 7.9% drop in the same period last year, indicating the global economy is continuing to strengthen.

China’s trade surplus rose to $38.2 billion in October from $28.6 billion the previous month. The politically sensitive surplus with the U.S., China’s biggest export market and second-largest trading partner, stood at $26.6 billion, the second-highest on record, after September’s $28.2 billion.

The figures were released hours before U.S. President Donald Trump arrived in China on the third leg of his Asia tour. Trade and the U.S.’s deficit with China will be among the top issues for discussion with President Xi Jinping during his three-day visit.

Data from China’s customs administration put the gap in the first 10 months of the year at $223 billion, although U.S. government figures show the deficit was $274 billion in the first nine months of 2017.

Trump, who last week described the figure as “embarrassing” and “horrible,” has made reducing the gap and boosting U.S. access to China’s markets one of his top priorities since coming to power. His administration has slapped anti-dumping tariffs on a range of Chinese imports, has toughened its stance on Chinese investment in the U.S., and is considering an investigation into whether Chinese companies are stealing the intellectual property of U.S. companies.

“The Trump administration remains deeply unhappy with the U.S.-China trade and investment relationship and has been exploring various ways to take policy action to force changes,” Louis Kuijs, head of Asia Economics at research firm Oxford Economics, said in a research note after the data.

Even though major business agreements will likely be announced during the U.S. president’s visit, “after coming home, the U.S. administration will remain eager to show results of some kind on the trade deficit. This could include more protectionist measures against Chinese,” he said.

Leaders from 28 American companies are traveling with Trump to China, the first business delegation of its kind to accompany a U.S. president on a state visit, Terry Branstad, Washington’s top diplomat in Beijing, told reporters earlier this week, adding that “many and varied” deals in areas such as manufacturing and energy are anticipated to be inked during the trip.

China’s imports from the U.S. in October rose by just 4.3% year on year, the weakest growth since April and slumping from a 14.3% pace in September, even as China’s overall imports jumped by 17.2%.

Despite the strong growth in total inbound shipments, there are initial signs of a slowdown in demand for commodities, possibly the result of the government’s efforts to rein in the output of polluting industries and slowing expansion in infrastructure investment.

Purchases of iron ore, which is used to make steel, dropped in volume terms in October from a record in the previous month, and were at the lowest level since early 2016. The volume of crude oil imports was the lowest since October last year.

The government has imposed tough curbs on industrial output from November to March in high energy-consuming and polluting sectors such as steel, in order to reduce the toxic emissions and smog that shroud much of northern China.

“While increasing commodity prices may continue to support headline imports in U.S. (dollar) terms, we expect growth of import volumes to ease towards the end of 2017 and into next year,” said Kuijs from Oxford Economics, pointing to the likelihood of softer economic growth as senior policy makers have indicated that they remain focused on reducing financial risk and deleveraging part of the financial system while aiming for a gradual easing of credit growth.

Julian Evans-Pritchard, an economist with Capital Economics in Singapore, said he expects “any further weakening in exports to remain mild given the relatively upbeat outlook for economic growth in China’s main trading partners.”

At a briefing last month, Huang Songping, a spokesman for the customs administration, gave an upbeat outlook for the country’s trade performance for the rest of the year in spite of uncertainties in the global economy.

“We expect the total value of exports and imports to continue to increase in the fourth quarter, and total trade hopefully will post double-digit growth for the full year,” he said.