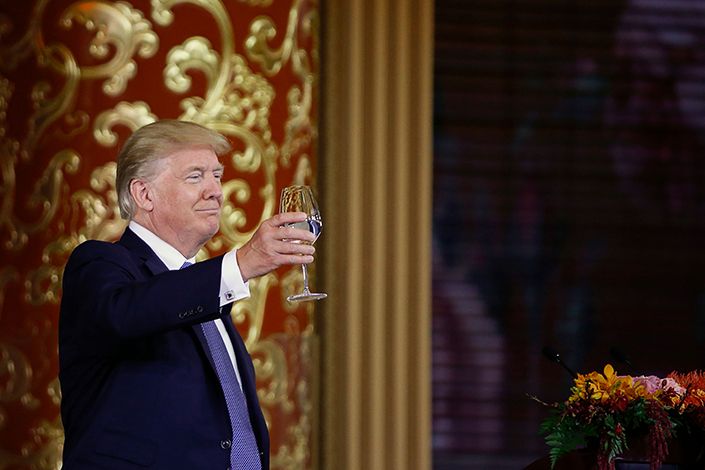 The U.S. and China signed agreements worth more than $250 billion during President Donald Trump's visit to Beijing this week. The deals covered a wide range of sectors, with energy development and aviation as major winners. Here, U.S. President Donald Trump attends a state dinner hosted by China's President Xi Jinping in the Great Hall of the People in Beijing on Nov. 9. Photo: Visual China

During his first visit to China, U.S. President Donald Trump and Chinese counterpart Xi Jinping presided over the signing of $250 billion in business deals covering a wide range of industries. Trump has repeatedly stressed the need for China to open its markets wider to U.S. investment and products, in part to reduce China’s large surplus in one of the world’s most important trade relationships.

Two of the largest deals announced will see major Chinese investors take part in energy development projects in the U.S. states of Alaska and West Virginia. Both involve development of natural gas resources, a major priority for China as it tries to lessen its reliance on dirtier coal that is a major factor behind the country’s big air pollution problem.

The following is a list of all the deals and brief descriptions:

Bell Helicopter: Reignwood agrees to purchase an additional 50 Bell 505s, act as the exclusive reseller for the Bell 505 in China and establish a Bell 505 delivery and maintenance center

Dow Chemical: Dow and Mobike sign memorandum of understanding to develop a business model to deliver Dow’s products to Mobike products and projects via a long-term strategic partnership

GM: Company and SAIC-GM sign agreement on intended purchases of vehicles and components worth $2.2 billion from U.S. over the next three years

Qualcomm: Company signs three non-binding memoranda of understanding with Xiaomi, Oppo and Vivo to purchase semiconductors with an aggregate value of about $12 billion over next three years

TEREX: Terex Utilities and Xuzhou Handler Special Vehicles Co. sign strategic letter of intent for Xuzhou Handler to purchase 5,000 insulated aerial devices from Terex over a five-year period, with a total value of more than $250 million