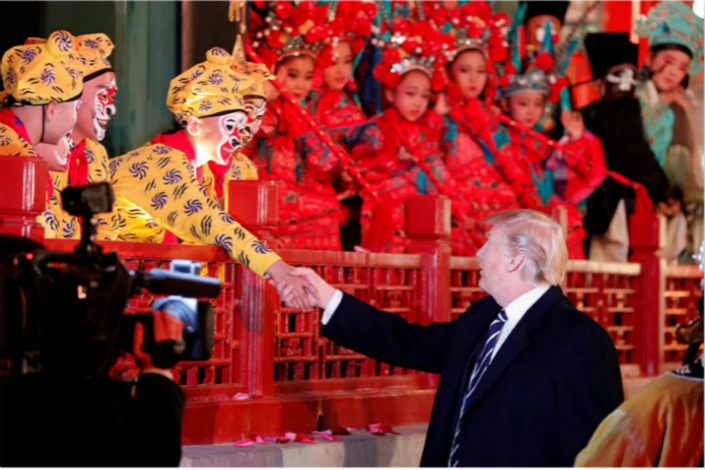 U.S. President Donald Trump, pictured here greeting opera performers after a Forbidden City performace, said that he and his "very special" counterpart will find a solution to their nations' trade imbalance that will be "fair and tremendous for both of us." Photo: IC

Both presidents attended a dialogue with business leaders from both countries in Beijing’s Great Hall of the People, where they were present for the signing of trade deals worth $253.5 billion, a record figure in the trade history of the two countries, the state-run China News Service reported, citing Chinese Commerce Minister Zhong Shan.

Xi told Trump that his administration would continue encouraging Chinese companies to invest in the U.S., according to the official Xinhua News Agency.

“We’re also hoping that the American side will export more technologies for civilian applications to China,” he said.

Xi said that the Chinese economy will become increasingly open and transparent to foreign companies, including U.S. firms. He also encouraged U.S. companies to participate in his “Belt and Road” infrastructure-led initiative.

The two countries will maintain steady communication on issues ranging from their respective structural reforms to management of the global economy, according to a statement issued by China’s Ministry of Foreign Affairs.

Xi emphasized the importance of Sino-U.S. relations at his meeting with Trump, saying cooperation between the two countries is “the only right choice,” according to Xinhua.

A win-win situation can lead to a better future, Xi said at his meeting with Trump on Thursday.

Xi has acknowledged that friction could emerge as Sino-U.S. cooperation grows. He urged both sides to deal with their issues with fairness and understanding.

Trump made clear that he blamed his predecessors, not China, for the trade imbalance, according to Reuters, and he repeatedly praised Xi, calling him “a very special man.”

“But we will make it fair and it will be tremendous for both of us,” Trump said.

Xi officially greeted Trump and his wife Melania Trump in a lavish ceremony in Tiananmen Square in central Beijing with an honor guard, a marching band and a 21-gun salute.

After their arrival in Beijing on Wednesday afternoon, Trump and the American first lady were whisked to the Forbidden City in central Beijing to meet Xi and his wife Peng Liyuan. The Chinese hosts showed Trump and his wife around the 15th century royal compound, where the U.S. couple was given a rare view of some treasured sites and treated to traditional Beijing opera.

On top of trade, Trump called on China to do more to resolve the North Korean nuclear issue, according to the Reuters. “China can fix this problem quickly and easily,” Trump said as he urged Beijing to cut financial links with North Korea and also called on Russia for help.

Both countries agreed to continue pressuring North Korea strictly in accordance with all UN sanctions on the country while “moving dialogue forward via peaceful means,” according to China’s Foreign Ministry, which didn’t provide details.