By Leng Cheng and Liu Xiao 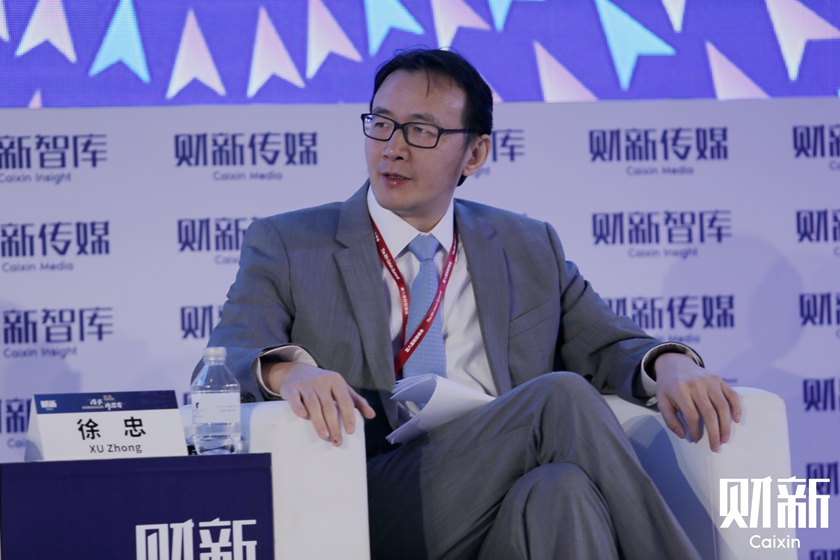 Xu Zhong, director general of the research bureau of the People’s Bank of China, said at the 8th Caixin Summit in Beijing on Thursday that Chinese policymakers' excessive focus on stability will cause hesitation in pushing ahead with reforms and delays — a situation that could eventually lead to a “big crisis.” Photo: Du Guanglei/Caixin

The head of research at China’s central bank has blamed vested interests and excessive concern for avoiding financial instability for holding up much-needed financial and economic reforms.

Xu Zhong, director general of the research bureau of the People’s Bank of China, called on policymakers to step out of their comfort zone and confront the challenges.

Xu warned that an excessive focus on stability will cause hesitation in pushing ahead with reforms and delays — a situation that could eventually lead to a “big crisis.”

“Tackling reforms is like chewing on a hard bone,” Xu said in a speech on the second day of the 8th Caixin Summit in Beijing. “Reform is absolutely not a process where success can be guaranteed. We must take the initiative to break out of our ‘psychological comfort zone,’ and fully recognize and prepare for the difficulties, challenges, and even major risks.”

Some policies introduced so far have had little real impact on resolving problems such as high corporate debt, financial leverage, and “zombie” financial institutions that should be allowed to fail, Xu said. The introduction of a property tax has been delayed; bankruptcy of problematic financial institutions is still rare; and mixed-ownership reforms at state-owned enterprises have still not been adequately tackled, he said, without giving more details of the vested interests he was criticizing.

“The next phase of reform will basically involve structural and institutional challenges that will require changing existing systems of how institutions operate and tackling vested interests in areas such as state-owned enterprises, the fiscal and taxation systems, and the expansion of opening up in both directions,” he said.

Xu highlighted the shortcomings of the debt-to-equity swap program, which was launched in 2016 and involves companies negotiating with creditors to swap their bonds and bank loans into equity.

“The debt-to-equity swaps reform promoted by the banks has so far only achieved a short-term reduction in companies’ debts. It has not led to any fundamental change in corporate governance or solved the problem of poor profitability,” Xu said.

The government is also encouraging state-owned companies to attract investment from the nonstate sector through the mixed-ownership reform program. But Xu was critical of the lack of fundamental change such capital injections have brought about.

“Many of the measures in the mixed-ownership reform only emphasize bringing in capital from the private sector, yet don’t pay attention to the role these shareholders should play in improving corporate governance,’ Xu said.

Policies to rein in surging property prices also appear to be aimed at achieving short-term targets, while a long-term mechanism to promote a healthy real-estate market, including a property tax and a framework governing land supply, have still not been set up, Xu said.

Xu also pointed out that a market-oriented exit mechanism has yet to be established for the financial industry to allow failing institutions to be closed down. Administrative intervention is still a common approach, but this only hinders progress in letting the market take the lead in dealing with the assets of zombie financial companies, and could ultimately lead to a deterioration in financial efficiency, he said.

Turning to the tax and fiscal systems, Xu said the current arrangements between central and local governments on sharing fiscal revenue is flawed and has given rise to many of the problems the economy now faces, such as hidden local government debt that has built up because of excessive emphasis in the past on incentivizing growth in gross domestic product.