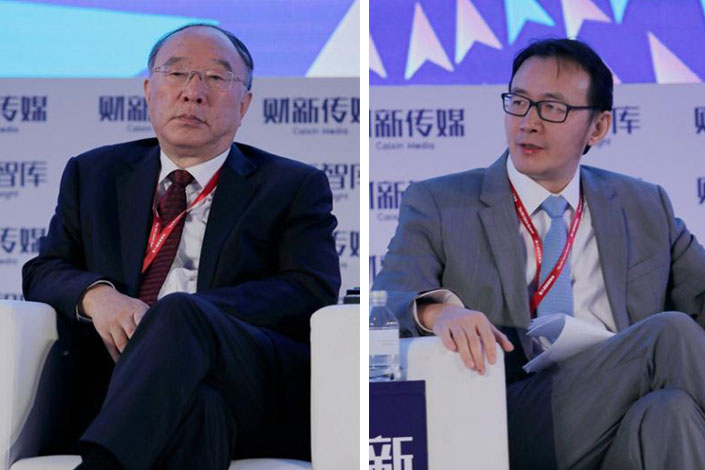 Huang Qifan (left), vice chairman of the Financial and Economic Affairs Committee of the National People’s Congress, said at the 8th Caixin Summit in Beijing on Thursday that “It is high time for the foreign exchange reserve system to be reformed.” However, Xu Zhong (right), head of the central bank's research department, said that many of Huang's ideas are unrealistic. Photo: Du Guanglei/Caixin

China should immediately change how it manages its foreign exchange reserves to deal with the problem of excessive leverage in the financial system, a top Chinese legislator said on Thursday.

The current management of the country’s foreign exchange reserves is the root cause of some of China’s most pressing financial problems, said Huang Qifan, vice chairman of the Financial and Economic Affairs Committee of the National People’s Congress, in a speech at the 8th Caixin Summit in Beijing.

The current method of parking all foreign exchange reserves at the central bank has generated excess liquidity in the economy, which has led to a spike in opaque, off-balance sheet lending — sometimes called “shadow banking” — which in turn has given rise to asset bubbles and higher financing costs for companies, said Huang, who is also a former mayor of the southwestern megacity of Chongqing.

“It is high time for the foreign exchange reserve system to be reformed,” he said.

Huang went on to blast how the central bank manages the country’s foreign exchange reserves, calling it “the origin” of the excessive financial leverage that has locked up an immense amount of money within the financial system and tightened the supply of credit for sectors that generate real economic activity.

China’s M2, a broad measure of money supply, is more than twice the size of China’s gross domestic product (GDP), compared with 70% in the United States. Value-added financial services accounted for 8.8% of China’s GDP in the first half of this year, the highest ratio in the world and double the level in 2005, providing a “landmark sign” of the financial sector’s failure in supporting the real economy as it should, he said.

The government should consider allowing the Finance Ministry to manage most of the country’s foreign exchange stockpile, which stood at $3.11 trillion at the end of last month. It remains the largest in the world.

Such an establishment could allow the treasury to issue special bonds to drain liquidity generated by an influx of foreign currency and in turn prevent runaway inflation. It would also allow firms such as the China Investment Corp. (CIC) — the country’s sovereign wealth fund — to use the proceeds from the note issuance to make investments overseas that yield better returns than foreign sovereign debt, he said.

It could also enable the central bank to “escape the hijacking” of its mission to purchase incoming foreign currency — a move aimed at keeping the yuan’s exchange rate at a certain level — so that the People’s Bank of China (PBOC) could form “real independent monetary policy” to better serve the economy, he said.

This way, “we will become a real financial power in the world — a power that is able to achieve a high-quality and sustainable return on global investment, rather than simply lending a huge amount of money to others,” he said.

However, Xu Zhong, head of the PBOC’s research department, dismissed Huang’s call as unrealistic. He suggested that China’s diversified foreign exchange investments haven’t been more successful than simply buying the sovereign debt of other countries.

If Huang were to take a look at the returns on the two types of investments, he might “draw the opposite conclusion,” Xu said during a panel discussion after the legislator spoke.

The CIC was established in September 2007 with a registered capital of $200 billion. Its net cumulative annualized return through 2016 was 4.76%, according to the company’s annual report.

Although rate of return on China’s foreign exchange investments is not publicly available information, China has used its foreign exchange reserves to invest heavily in U.S. sovereign debt. China held $1.18 trillion worth of U.S. debt at the end of September, according to figures from the U.S. Treasury Department. And the yield on 10-year U.S. Treasury bonds is around 2.4%.

Xu also disagreed with Huang about allowing the Finance Ministry to issue special bonds for overseas investment, warning that would be investing with other people’s money and raise the government’s debt ratio.

Speaking at the same dialogue, Yu Yongding, a senior researcher at the Chinese Academy of Social Science, a government think tank, and a former monetary policy advisor of the PBOC, urged authorities to let the market completely determine the yuan’s exchange rate to solve the problem of the “long-term and continuous accumulation of foreign exchange reserves.”

“Conditions are ripe to allow the yuan to float freely. It is a safe time to do this,” he said. “Actually, there is no time better than now.”