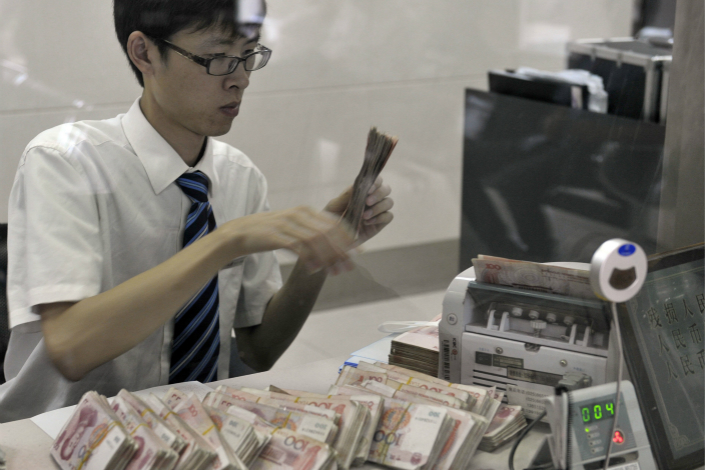 The ongoing deleveraging campaign within China's financial system has continued curbing the expansion in M2, the broadest measurement of the country's money supply, in October. Photo: Visual China

(Beijing) — The growth of China’s broadest measure of new credit in October fell short of what analysts expected as some of the country’s largest commercial lenders have already used up their respective annual loan quotas.

Total social financing — the broadest measure of credit, which includes bond and equity issuance, trust loans and entrusted loans — stood at 1.04 trillion yuan ($156.6 billion) in October, the People’s Bank of China (PBOC) said on Monday. It was down from 1.82 trillion yuan in September but was still higher than the 886.5 billion yuan reported in October 2016.

The ongoing deleverage campaign within the financial system continued curbing the expansion in M2, China’s broadest measurement of the money supply. M2 rose by 8.8% in October from a year earlier, the weakest increase on record and down from 9.2% in September and 11.6% a year earlier. The PBOC has described the slowdown as a “new normal,” reflecting its progress in cutting financial leverage.

M2 refers to the so-called M1 — cash and corporate demand deposits — plus so-called quasi-money that will not be used in the short term, including time deposits and personal savings.

Chinese commercial lenders extended 663.2 billion yuan in net new loans in October, the central bank said. The number was below market expectations of 783 billion yuan, down from 1.27 trillion yuan in September, and was up only marginally from 651.3 billion yuan in the same month in 2016.

The lower-than-expected lending in October does not necessarily indicate sluggish economic conditions, said Liu Dongliang, a senior analyst at China Merchants Bank. He said the slowdown of credit growth toward the end of the year is normal as some banks may have already used up their respective annual loan quotas set by the central bank.

As regulations are tightened, banks become less active in off-balance sheet lending, forcing them to turn to standard loan issuance.

China’s bond market got another dose of the jitters in late October as speculation swirled of an impending crackdown on interbank borrowing that could further hit the demand for bonds.

The government’s campaign to cool the housing market through the imposition of administrative controls and higher mortgage interest rates continued to take hold. Long-term household loans, mostly mortgages, were 371 billion yuan in October, down from 478.6 billion yuan in September and 489 billion yuan in the same period last year.