Foreign New-Energy Carmakers Can Soon Take the Wheel in China 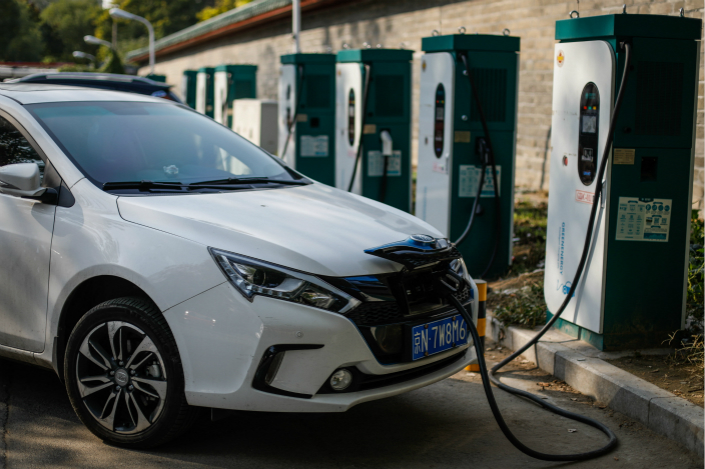 The current 50% limit in the stake that foreign companies can have in carmaking factories in China will be lifted as long as the companies are producing new-energy cars in free trade zones. Above, an electric car charges at a station in Beijing on Oct. 23. Photo: IC

Foreign new-energy carmakers will be allowed to own a larger stake in their joint ventures in free trade zones in China, while certain companies such as Tesla Inc. might be able to wholly own their assets.

China’s Ministry of Foreign Affairs said Friday that the current 50% limit in the stake that foreign companies can have in carmaking factories in the country will be eased as long as the companies are producing new-energy cars in free trade zones by June. Tariffs will also be lowered for cars made by foreign firms and sold in China, the ministry added.

The new rules are an outcome of U.S. President Donald Trump’s three-day visit in China, which ended Friday, the ministry said.

China has been actively pushing the development of the electric-vehicle sector in recent years as part of its efforts to clean up the country’s polluted air as well as to shift away from heavy dependence on energy imports. Another preferential policy is that Beijing has allowed foreign carmakers since June to form up to three joint ventures, up from two previously, if they produce new-energy cars.

Another reason for foreign carmakers to go solo in China: protection of their intellectual property. According to various media reports, foreign carmakers believe forming joint ventures could lead to potential leakage of patents and other technology.

Meanwhile, the research arm of Chinese oil giant PetroChina Co. issued a report saying the costs for new-energy vehicle will be comparable to traditional fossil fuel by 2030.

“If we want to reach the goal of reducing the country’s oil import to less than 70% by 2025, the country need to ramp up efforts to continue investment in the sector,” Dai said.

This article has been corrected to make clear that not all foreign-owned carmakers will be allowed to be full owners of their plants in China's free trade zones, and that the current 50% limit that foreign carmakers can own in mainland factories will be eased, not removed.