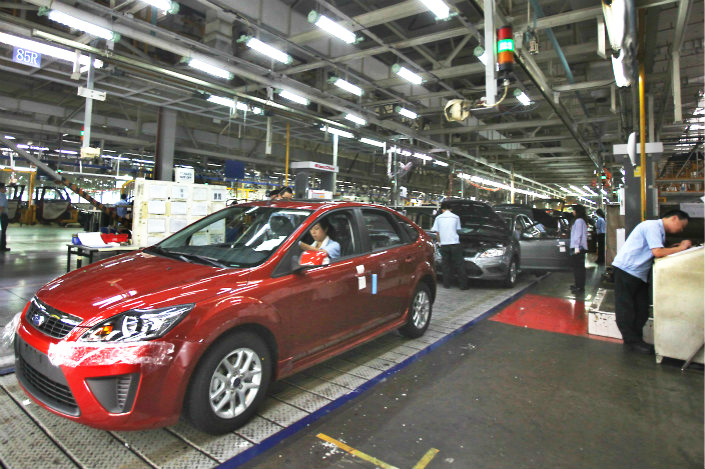 Ford has two existing joint ventures in China. Chinese law has long limited foreign firms to just two such ventures, but in 2015 Beijing relaxed this rule to allow companies to form a third venture if it produces new-energy cars. Photo: Visual China

Ford Motor Co. and China’s Anhui Zotye Automobile have agreed to set up a joint venture to build electric passenger vehicles in China.

The news, announced Wednesday, comes two months after the pair said they intended to form the venture.

The total investment is estimated at 5 billion yuan ($756 million) and both partners have a 50% stake in it.

Once Chinese regulators sign off on the deal, the new venture — Zotye Ford Automobile Co. Ltd. — will open a new manufacturing plant in Zhejiang province and produce all-electric vehicles under a new Chinese brand name.

The move is part of Ford’s efforts to meet China’s new quota system aimed at encouraging zero-emissions vehicles. Announced in September, the system requires that a certain percentage of a vehicle-maker’s sales be either electric vehicles or hybrids by 2019.

The venture is targeting 10% of the electric-vehicle market in China, with a planned yearly capacity of 100,000 units, the companies said in a statement. Based on its total sales in 2016, the automaker would need to sell 20,000 electric vehicles in China next year to meet the quota.

China’s new-energy vehicle market has taken off in recent years due to a series of government incentives, including subsidies, which will be phased out over the next few years. The country is now the world’s largest manufacturer of electric vehicles, with more than 500,000 units sold last year.

With Beijing’s introduction of the quota system, foreign automakers have been ramping up efforts to compete in the fledging market.

General Motors has said that nearly all models from its brands in China would be either hybrid or fully-electric by 2025.