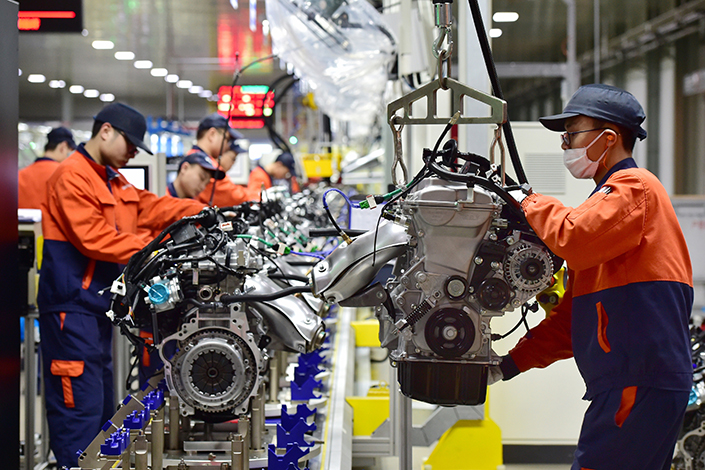 Chinese regulators will strictly limit construction of new car manufacturing plants in a bid to rein in a runaway buildup. Above, workers assemble engines in a car production line of Zhejiang Geely Holding Group in Yiwu, Zhejiang province, on Feb. 7. Photo: Visual China

(Beijing) — Beijing regulators will strictly limit construction of new car manufacturing plants in a bid to rein in a runaway buildup that has seen capacity greatly outstrip demand, according to a new announcement from the state planner.

The National Development and Reform Commission (NDRC) outlined three kinds of new projects that won’t get its approval under the policy, covering most new investments for car production, it said in a posting on its website dated on Monday.

The policy also limits approval for expansion of existing car-producing ventures, laying out strict conditions that must be met before such addition will be approved. Those include a requirement that any producer looking to expand capacity must have a current utilization rate above the industry average over the last two years, and that new-energy vehicles must account for a greater percentage of their overall output than the industry average over the last year.

The new announcement provides greater detail following an NDRC announcement at the end of last year saying it planned to strictly control the addition of new capacity for traditional gasoline powered cars. At the same time, the NDRC said in its latest announcement that new-energy cars wouldn’t be affected by the new limits.

China is now the world’s largest auto market, fueled by millions of new upwardly mobile middle class Chinese. Last year sales topped 28 million units, up 14% year-on-year, as buyers rushed to make purchases before the reduction of government incentives aimed at promoting cleaner energy vehicles. But the gains are slowing sharply this year following the reduction in incentives and as China’s broader economy slows.

Despite the slowdown, China had annual car production capacity of 31.2 million vehicles, with capacity for another 6 million under construction at the end of last year, according to the China Association of Automobile Manufacturers. It added the industry is already oversupplied, with some facilities producing at less than 60% of capacity.