Still in the Shadows 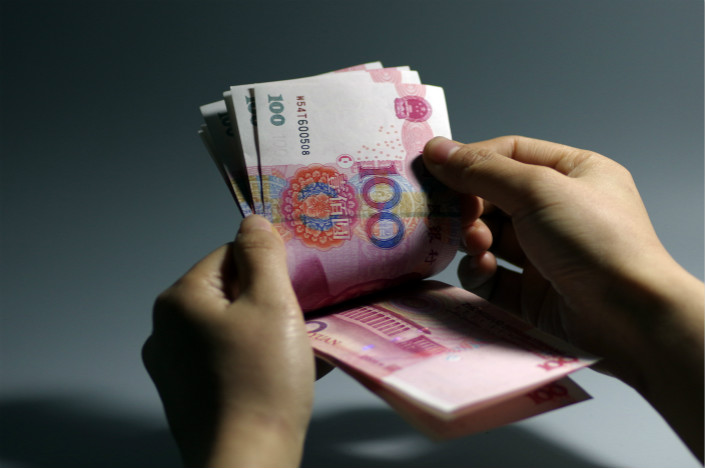 Following years of off-balance-sheet lending to pump up the economy’s overall credit growth, the China Banking Regulatory Commission (CBRC) has been trying to rein in the runaway expansion of “shadow loans.”

In China, credit beneficiary rights refer to a stream of interest payments on a loan, but not the ownership of the loan. Current CBRC rules do not require banks to disclose their holdings of credit beneficiary rights as long as two conditions are met: they buy with the proceeds from the banks’ own sales of wealth management products (WMPs), and the seller has registered the rights with the Banking Industry Credit Asset Registration & Exchange Co. (BICARE), a small trading platform under the CBRC specifically for nonstandard credit assets.

The initial purpose of setting up platforms like the BICARE was to strengthen regulators’ management of nonstandard credit assets by pursuing banks that don’t list loans on their books and hide such loans from regulators. But the exercise turned out to be a variation of the Whac-A-Mole arcade game, in which small animals take turns popping out of one of several holes and the player attempts to swat them with a mallet before they disappear back into their respective holes.

As the market becomes more crowded, so do systemic risks. Similar platforms, but approved by other government entities such as the central bank or the China Securities Regulatory Commission (CSRC), are also jumping on the lucrative bandwagon of nonstandard credit assets.

It throws us back to the billion-dollar question: How far has China actually gone in deleveraging its credit-fueled economy?

In March 2013, the CBRC started limiting any commercial bank’s investment in nonstandard credit assets at 35% of its total exposure to wealth management products (WMPs), as well as 4% of the bank’s total assets as of the end of the previous fiscal year.

Three years later, in April 2016, the CBRC finally took aim at credit beneficiary rights. But the new policy was far from plugging policy loopholes: While it restricted the funding source to only WMPs, the regulator still allowed banks not to recognize their holdings as nonstandard credit assets in their books as long as the products were BICARE-registered.

As of the end of June, 4.6 trillion yuan ($693 billion) worth of WMPs, or 16.14% of the product’s total value, was invested in nonstandard credit assets, BICARE said earlier. The proportion dropped from 17.5% as of the end of 2016. It does not have a breakdown of how many of the WMPs were invested specifically in credit beneficiary rights.

The Ministry of Finance and the CBRC set up the BICARE in June 2014. The scope of its services includes the registration and trading of credits and other financial instruments, as well as relevant information disclosure. Loans from local government financing vehicles and property developers are not tradable there.

“In fact, it has become another important trading venue on top of the interbank bond market and the exchanges,” said a senior executive of Bank of China International Securities Co. Ltd.

Another senior executive from a credit rating agency said that as of February, the aggregated trading value of assets listed at the BICARE was about 400 billion yuan, and nearly a third of the assets were structured financial products.

Since the CBRC unleashed a regulatory frenzy aimed at sweeping out some longstanding problems in the industry such as excess leverage, trading of such structured products has cooled.

“In practice, some trust companies hope to list and trade their risky assets on the exchange (BICARE) to reduce credit risks,” said a lawyer who is an expert in asset-backed securities. “But such products can hardly secure an approval recently, indicating regulations are tightened.”

“These asset registration platforms create more of a gray area for off-balance-sheet activities,” said a senior banking executive familiar with the registration of nonstandard products. “All efforts in financial deleveraging building up to this point could be in vain.”

Since late 2009, the CBRC introduced new regulations dubbed the Chinese version of Basel III — a reference to the series of global reforms to improve the regulation, supervision, and risk management of the banking sector — to reduce the overall leverage of the banking system. However, the banking executive estimated that the system’s leverage ratio could be five times higher than now if lenders are allowed to transfer nonstandard credit assets to platforms like BICARE.

According to regulatory filings, three banks in Beijing and Jiangsu province set aside only 20% of their cash as credit-loss provision on nonstandard products.

A senior finance regulator has suggested that such a cash buffer on structured financial products should ideally be 100% to hedge against risks.

Besides the BICARE, other thriving over-the-counter markets such as the Inter-Agency Quotation and Service System, a trading venue approved by China Securities Regulatory Commission (CSRC); and Beijing Financial Assets Exchange, approved by the PBOC, are also trading more nonstandard credit assets these days.

Their respective fees are a key weapon they are using to compete for market share.

For instance, the registration fee of BICARE is set from 0.05% to 0.1% each; the Beijing Financial Assets Exchange under the CSRC charges fees of 0.1% to 1% for each registration; while the Inter-Agency Quotation and Service System doesn’t charge fees.

“Regulations are discordant,” said a senior manager at the investment banking department of a brokerage. “Without CBRC policy, banks won’t classify asset-backed securities traded on the quotation system as ‘standard’ products, and they may not have an incentive to wrap up and trade nonstandard assets there.”

PBOC Deputy Governor Pan Gongsheng said in May 2015 that from a long-term perspective, an overarching management of various securitized asset products is needed to prevent market participants from taking advantage of regulatory loopholes.

Regulators need to strengthen rules over the information disclosures of nonstandard asset trading, making the markets and the role of financial intermediaries more transparent, Wang added.