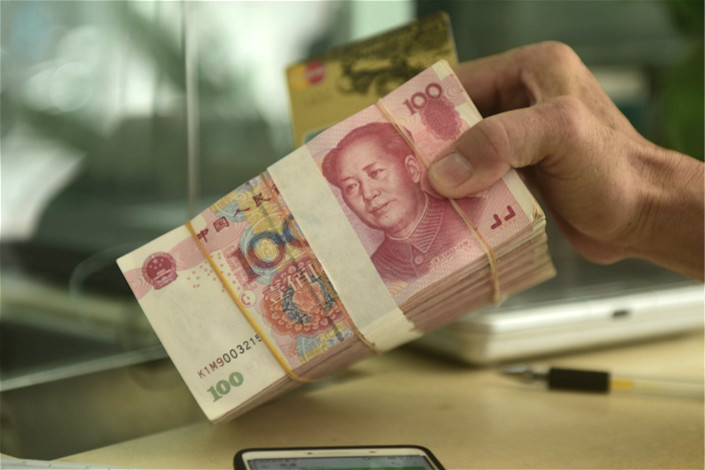 As of the end of June, the outstanding value of wealth management products sold among financial institutions dropped 31% to 4.61 trillion yuan ($699 billion) from the end of December. Photo: Visual China

Commercial banks, brokerages and insurers in China relied less on wealth management products (WMPs) as their financing avenue in the first half as regulators clamped down on potentially risky lending outside the formal banking system.

As of the end of June, the outstanding value of WMPs sold among financial institutions dropped 31% to 4.61 trillion yuan ($699 billion) from the end of December, according to a report released Friday by the China Banking Wealth Management Registration & Depository Center.

Outstanding value of all WMPs, including those sold to retail investors, grew 8% to 28.38 trillion yuan during the same period, the report said. The growth rate, however, slowed sharply from 43% from a year ago.

Yields as a result improved as there were fewer short-term debts in the interbank market.Yields on closed-end funds, for instance, rose to above 4% from about 3.5% at the beginning of this year, the report added.

The scaling down of WMPs, particularly among financial institutions, comes at a time when regulators tightened the oversight of the interbank market to prevent excessive risks from building up. Since late March, China’s banking regulator has issued multiple policy documents aimed at reducing systemic financial risks, including bad loans and interbank borrowing.

Everyday customers and corporate borrowers have been flocking to WMPs over the past few years as they provide higher return than bank deposits in a climate of shrinking investment opportunities and slowing economic growth momentum.

Small and midsize banks rely more on WMPs for their funding needs than their larger peers do. However, the Friday report shows that midsize joint-stock banks had shrunk their exposure to WMPs the most, falling 3.67% to 11.8 trillion yuan from the end of December. State-owned banks’ exposure, in contrast, edged 1.7% higher to 9.27 trillion yuan.

The Friday report said nearly 21 trillion yuan raised by the sales of WMPs were used to boost the real economy, up 6.5% from the beginning of this year. Such funds flowed to support the business expansion of companies via investment in corporate bonds, stocks and some nonstandard credit assets such as bills and trusted loans, according to the report.