A Date With Dislocation

By Susan Xu and Chen Liang 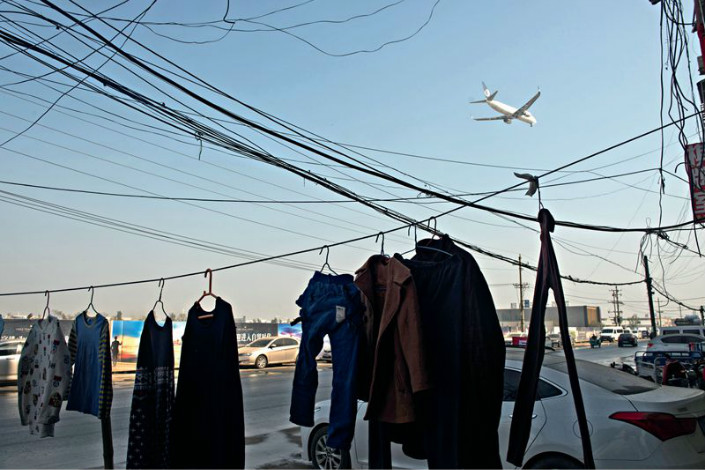 Clothes hang out to dry outside a home in the Zhengzhou Airport Economy Zone in Henan province in November 2016. Photo: Caixin

The Henan province city of Xinzheng has been famous for its dates for decades, attracting merchants from as far afield as Shanghai and Guangzhou.

However, its date trees have mostly been felled or abandoned, as swathes of the city’s countryside was designated part of the Zhengzhou Airport Economy Zone in 2013. This change, which followed the construction of a huge factory in the area manufacturing Apple products, changed the lives of 70,000 rural residents living in the area.

Wang Quanzhong, a 26-year-old farmer from Dougou village, one of the 42 villages affected by the zone, moved into a high-rise apartment supplied by the local government earlier this year. To the north of his block are mounds of rubble, and to the south is where his village’s date orchards once flourished. “The industrial change in this area has brought a lot of opportunities,” Wang said.

Changes came quickly to Dougou village. First, many of the villagers turned their homes into stores, to profit from the factory workers. Two years later when the plan for the economy zone was approved, in December 2013, villagers were given abrupt notice — their homes would be demolished within a month and their farmland would be taken away from them.

The government moved the village’s 2,000 residents into narrow rows of prefabricated shelters nearby, paid them compensation for their lost land and promised them that they would soon be given permanent new homes in apartment blocks being built adjacent to their old village. All the villagers have now moved into apartments.

The date orchards are now either abandoned or have been leveled. Tracts of former farmland are now untended, awaiting future development including a planned railroad as the local government tries to industrialize the area.

“I was idle for all of 2014. I didn’t know what I should do with my life after I took the government’s compensation and moved into the new shelters,” Wang said.

Once of the village’s poorest residents, he now owns two barbershops and runs a microcredit company. “I started my own business with the compensation money,” he says, adding that “I was a worker before, so I believe I should be kind to my employees to motivate them.”

After their old homes and livelihoods were gone, the villagers had to transition into urban life — though they have not been given the urban household registrations that would offer them access to city public services. Many of the former farmers took jobs at the Foxconn factory, but a few months later most had quit, as they were paid little and worked hard. Some of the village’s elderly men became street sweepers, while others dedicated themselves to domestic chores. The village’s women tended vegetable patches they planted around the prefabricated shelters. Most Dougou villagers of working age are now employed in either the industrial or service sectors.

Though their neighbors didn’t change and their families were still close, the social fabric of the village has been torn. Although they lived closer than ever before in the cheek-by-jowl shelters, it became more difficult to socialize. Families used to be able to hold celebrations in their homes’ yards, but parties at that time had to take place in the muddy streets between the temporary houses. The small shelters made it harder to be a hospitable host, so people visited each other less.

Though the Dougou villagers have moved into their permanent apartments, some have found the transition from rural resident to urbanite difficult. Many felt alienated when they moved into the tower blocks, and even though some have lived in their new homes for several months, they still rarely visit one another. This transition has been especially difficult for the village’s elderly people. While the youngsters decorate their apartments with new furniture, the older people still use their older, worn decorations. Lie Tiecheng and other elderly Dougou villagers have clung most tightly to their old social lives, often sitting around in the apartment compounds’ open spaces and playing games with each other.

This process of rapid urbanization is not unique to Xinzheng. Urbanization has accelerated over the last 15 years, with the country’s urban population growing larger than its rural population for the first time in history in 2012, according to official statistics.