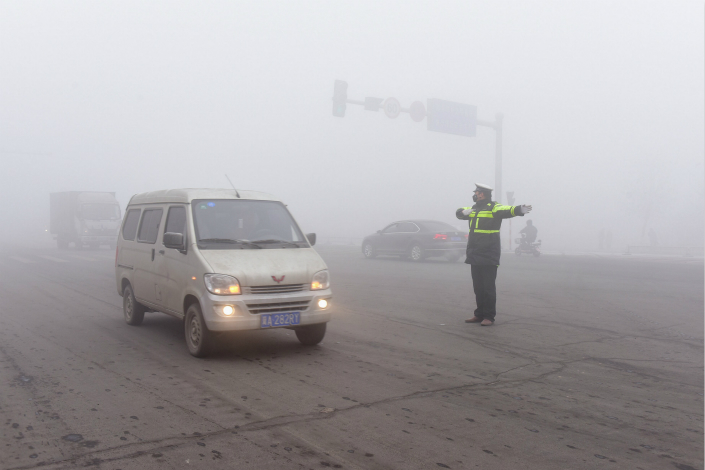 The concentration of PM2.5 in the air of the region that encompasses Beijing, Tianjin and Hebei province from January through October rose 8.5% on average compared with the same period last year. Above, police in Shijiazhuang, Hebei province, directs traffic in smog on Jan. 3. Photo: IC

Air quality in “China’s most polluted area” — Beijing and the surrounding region — deteriorated in the first 10 months of the year, with 22 fewer “blue-sky days” compared with the same period last year.

A “blue-sky day” is one in which the Air Quality Index — a weighted measure of the concentrations of five major air pollutants, including PM2.5, PM10 and ozone, is below 100.

But the Chinese capital, the port city of Tianjin and 11 cities in Hebei province recorded only 165 such days — or five months’ worth — from January through October, when air pollution was below this threshold. However, the number of blue-sky days in the capital itself this year was slightly higher.

The concentration in the air of the cancer-causing fine particulate matter known as PM2.5 in the 13 cities during the 10-month period rose 8.5% to 64 micrograms per cubic meter of air on average compared with the same period last year, the Ministry of Environmental Protection said Friday. The World Health Organization says it’s unsafe to have over 35 micrograms of PM2.5 particulates per cubic meter of air.

The level of PM10, another harmful pollutant, rose by 7.7% year-on-year to 112 micrograms per cubic meter of air, ministry data showed.

The area that encompasses Beijing, Tianjin and Hebei has been earmarked for the development of a megacity that will be home to about 8% of China’s population. But the region is regularly choked by severe smog, and Hebei is home to six of China’s 10 most polluted cities. This has led to Chinese media calling the region “China’s most polluted” in terms of air quality.

The revelation bodes ill for official air-cleaning targets in some of these cities. Authorities have already ordered thousands of polluting manufacturers in the area to shut down in accordance with a four-year action plan from 2013 to 2017.

Under the plan announced by the State Council, China’s cabinet, in September 2013, authorities in the so-called Jing-Jin-Ji area need to ensure that the average annual level of PM2.5 goes down by 25% compared with 2012 levels by year-end.

Of the 13 cities, only Beijing seems likely to hit this target, with the average level of PM2.5 down by 6.2% to 60 micrograms per cubic meter from January to October, according to the Environmental Protection Ministry.

Residents in the capital enjoyed 177 clear-sky days in the first 10 months of the year. There were also 25 blue-sky days in Beijing last month, eight days more than the figure in October last year.

This came after the city government has ordered the closure of hundreds of industrial polluters, intensified a crackdown on the use of coal and poor-quality fuels, and curbed dust emitted from construction sites across the city over the past four years.

Meanwhile, the average number of blue-sky days nationwide was down 2.5% to 244 days from January to October, according to data collected by the ministry from 338 major Chinese cities

The PM2.5 level remained flat at 47 micrograms per cubic of air across the country during the 10-month period, the ministry said.