Should Western Singers Learn to Sing in Chinese? 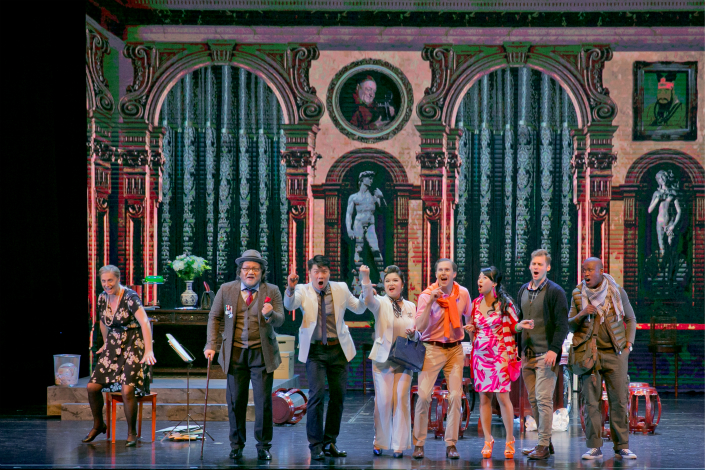 A performance of Giacomo Puccini’s comic opera "Gianni Schicchi" is held at the Suzhou Culture and Art Center. The performers were taking part in an art exchange program known as iSing, which trains Chinese singers to sing in Italian and performers from 14 other countries to sing Chinese folk, pop and opera songs. Photo: iSing

On a sweltering evening at summer’s end, the opera house at the Suzhou Culture and Art Center was packed to capacity for a favorite annual event: the closing performance of iSing, or the International Young Artists Festival. Forty-three singers from China and 14 other countries presented a remarkable performance of Giacomo Puccini’s comic one-act opera “Gianni Schicchi,” sung in Italian. They followed it with a selection of folk, pop, and opera songs from different periods of the People’s Republic of China, sung in Chinese, all accompanied by China’s newest orchestra — the Suzhou Symphony, under the baton of Stanford University music professor Jindong Cai.

As warm applause cascaded through the hall, the cast shielded their eyes to peer into the audience and broke into a rhythmic chant: “Tian Haojiang! Tian Haojiang!”

Tian Haojiang, the renowned bass who co-founded and co-runs iSing, could be seen — and heard — standing in the aisle and shouting at operatic volume, “Martha! Martha!” Meanwhile, Martha — his wife and partner Martha Liao — was herself clapping so fervently for the young singers she had supported through five weeks of the iSing program that she forgot to join her husband to go take a bow.

ISing, the brainchild of Tian and Liao, started in Beijing in 2011 to promote Mandarin as a lyric opera language. ISing has evolved into a thriving young artists program and moved to the Suzhou Industrial Park in 2014. More than 200 singers from China and other countries have passed through the program, which includes classes in Italian and Chinese language and opera, diction, voice, repertoire and performance history; a variety of recitals and outreach activities; and a major performance, held this year in both Suzhou and Nanjing. Many iSing participants have gone on to perform in top global opera houses, including the sopranos Yu Guanqun, Nicole Haslett, and Juliet Petrus, baritone Wang Yunpeng, and bass Nicholas Brownlee.

ISing’s roots go back to 1983 when Tian, who had worked in a Beijing factory for six and a half years before attending the Central Conservatory, left for the United States with, as he put it, “$50 and four words of English.” He was headed for the state of Colorado to study at the University of Denver School of Music, where he struggled to learn English and eked out a living by cleaning a movie theater and playing piano in a Chinese restaurant.

“I was a poor pianist,” he said. “I could only play by ear. After 10 minutes, I would run out of repertoire and play revolutionary music from memory.”

That’s when Tian met the British-born Liao, a geneticist who lived in Denver. “But I couldn’t even talk about marriage to Martha,” he recalled, “because she is a scientist and she worked at the medical school, and I was just a singer with no high notes and no low notes.” However, neither could he forget her, so he made himself a solemn vow. “I pledged: I will make it in singing. I didn’t even dream I would sing with famous opera houses — I just wanted to make a living as a singer and be able to marry Martha. That was my goal.”

For the next two years, Tian flew to New York whenever he had enough money, taking voice lessons, entering competitions, and sleeping in the apartment of Wei Fugen, a renowned piano accompanist and vocal coach who now coaches for iSing. When Liao threw a fundraiser for Opera Colorado and its founder, Nathaniel Merrill, Tian sang at the event and made a big impression.

Merrill, who had been resident stage director at New York’s Metropolitan Opera for nearly three decades, connected Tian with his wife, the conductor Louise Sherman, and she taught Tian free of charge for five years. They devoted two of these years to mastering just six arias, word by word and phrase by phrase, and when Sherman finally deemed Tian ready, Merrill helped him get auditions in New York.

On Feb. 1, 1991, Tian found himself standing on the stage of the Metropolitan Opera, singing for renowned maestro James Levine, the Met’s music director. The following day, Tian received life-changing news: the Met wanted him. Back in Denver, Tian checked his mailbox and on March 18 discovered an envelope that contained a contract for an entire season at the Met. He called Liao at work and said, “Please come home now, I think we should get married today.” Liao went home and they got married that afternoon. The couple then moved to New York, where Liao found a new job, and Tian’s career took off.

In 2000, Tian was in Genoa, Italy, preparing to sing a demanding role in a difficult Verdi opera with an international cast. During breaks, he chatted with his fellow singers and was dismayed to see how little these seemingly sophisticated people knew about China. This got Tian thinking about how all the time and effort he had put into learning the languages and cultures of the West. “I felt I knew much more about the West than the West knew about China, … and the more I learned, the larger was my world.” Tian started to think that it was time for young singers to start studying in China. “They are the future, and they should have a sense of the East, and the West.” He talked about it with Liao, who had by now retired to travel with Tian, and she agreed. They started off slowly, bringing individual coaches, conductors, and directors to China for master classes and exchanges, and then hatched and launched iSing.

The iSing program is an intensive labor of love that involves not only musical training and performances, but annual fundraising and the minutiae of international recruitment and travel, together with all the logistics of accommodating foreigners in China. But Tian and Liao remain passionately committed to the endeavor they started.

“I didn’t expect it to spread so fast,” Liao said. “Our goal is still to promote Chinese as a lyric opera language, but also to incorporate training of Chinese talents — they can get a very realistic and true picture of what it is to become an opera singer through us.” Good Chinese singers, she said, could find fame and money in China just by singing in gala concerts. “But to become an opera singer and have a career in the classical music world is very different, and that is what we are giving them.”

Foreigners, meanwhile, would understand firsthand how rapidly China was changing. “People in the West have to come here and see it themselves,” she said. “These (foreign) singers come to this country, and they all tell us it changed their lives, their outlook, their way of thinking about how to have a career in classical music. It is not just going to Europe. You have to pay attention to this part of the world because opportunities are here.”

Andrea Zaupa, an Italian singer who played the eponymous role of Gianni Schicchi, was participating in iSing for the third time. He called the program a “very nice gift” that gave him an opportunity he never would have otherwise had — to work with people from around the world, in China.

“We didn’t know Chinese music,” he said, “I was surprised it was so beautiful and deeply touching.” The quality of the performance venues in China was another surprise. “I couldn’t imagine the theaters were so modern and beautiful. … They are the most advanced theaters in the world.”

Tian, for his part, nurtured numerous ideas for improving and expanding the program, giving more opportunities to young singers from East and West, while introducing younger Chinese audiences to the joys of opera and Western audiences to the strength of opera performance and composition in China.

“Time flies,” he said, “and I do feel pressure, a sense of urgency. I have been helped by so many people. … So, I feel I owe something. I have to give back.”

Sheila Melvin is a newspaper columnist. Her latest book, “Beethoven in China: How the Great Composer Became an Icon in the People's Republic,” co-authored with Jindong Cai, was published by Penguin Books.