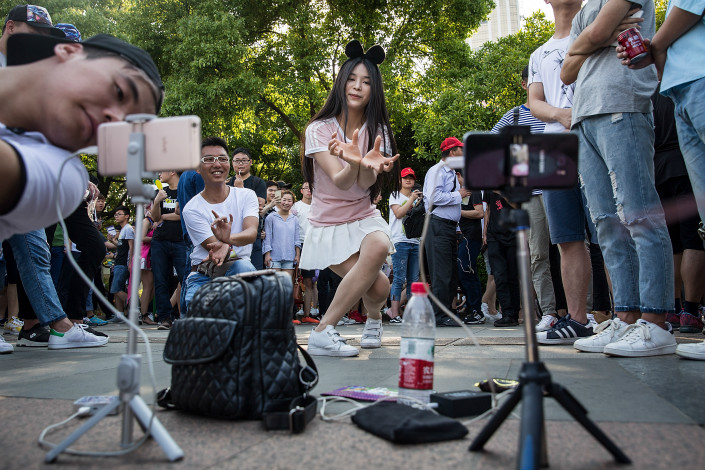 While video game livestreams remain China's dominant category of the online broadcasts, making up 81.7% of the total in October 2016, broadcasts featuring individual stars and other talent have made big inroads. Photo: Visual China

Leading video game livestreaming platform operator Douyu said it has completed a fourth funding round, as it passed the important milestone of operating profitably.

Livestreaming has soared in China over the last two years, launching careers for a new generation of internet celebrities whose online activities are as diverse as telling raunchy jokes and eating meals online. Douyu has benefitted from China’s huge pool of online gamers who have also flocked to the medium for livestreamed gaming.

The company did not disclose how much money it received in its latest funding round, but added it was the first to complete a fourth round among the field of players in the young space. It added it has now become profitable, and is using the new funds for outside investments. The new round was led by CMB International, the overseas arm of China Merchants Bank, and also included Nanshan Capital.

A Douyu spokeswoman had no comment on whether the company plans to make an eventual IPO. But the profitability and completion of such late-round fund-raising are typically conditions most companies try to meet before making such offerings, with New York often the preferred destination for such high-tech firms.

Douyu has previously raised 2.2 billion yuan ($333 million) through previous funding rounds, which had given it a market value of more than 10 billion yuan, the company said. It cited industry data saying the broader sector is expected to generate nearly 32 billion yuan in revenue this year, with that amount set to grow to 60 billion yuan by 2020.

“Our abundant funding, plus profitability and forward-looking strategic position will allow Douyu to continue consolidating its position and move ahead as the leading live broadcaster,” the company said in its announcement of the new funding. “It will also allow the company to keep developing new entertainment products for the internet.”

According to a government-sponsored index for the industry released at the end of last year, the dominant category for livestreaming is online games, which accounted for 94.9% of all such broadcasts at the start of 2016.

But that figure was down to 81.7% by October last year, as broadcasts featuring individual personalities and other talent made big inroads. Such programs rose from just 2.8% of all livestreaming in January to 16.4% by October.