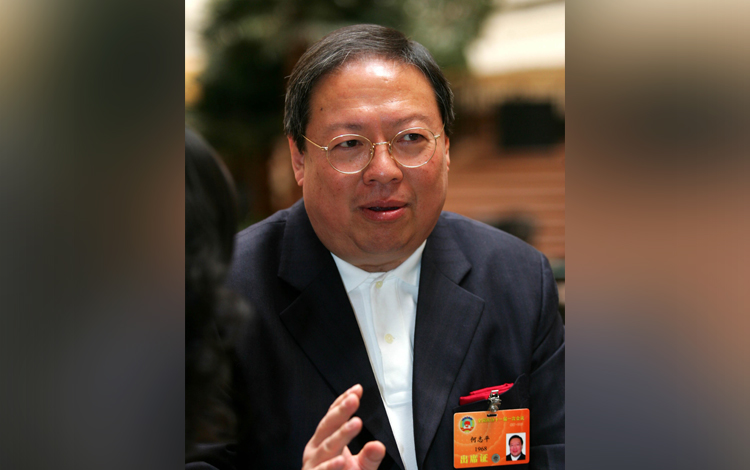 Patrick Ho, who was the secretary general of CEFC China Energy Co.’s China Energy Fund think tank back in 2011, was not authorized to “engage in such business behavior,” CEFC said in a statement. Photo: Visual China

The Justice Department said in a statement Monday that former Senegalese Foreign Minister Cheikh Gadio was arrested on Friday, and former Hong Kong Secretary of Home Affairs Patrick Ho on Saturday. Both were found to have violated the Foreign Corrupt Practices Act and committed money laundering, it said.

The statement did not name the Chinese energy company. It only said the company, which funded a non-governmental organization of which Ho was the head, is a “Shanghai-headquartered multibillion-dollar conglomerate that operates internationally in the energy and financial sectors.”

Based on public records, Ho was the secretary general of CEFC China Energy Co.’s China Energy Fund back in 2011. CEFC, one of China’s largest private energy companies, made headlines some two months ago with its purchase of a 14.16% stake in Russia’s Rosneft for $9.1 billion.

On Tuesday, CEFC said in a statement it did not authorize Patrick Ho or any other party to “engage in such business behavior.”

According to the Monday statement from the U.S. Justice Department, Ho and Gadio allegedly offered $2 million to Idriss Deby — who has been president of Chad since 1990 — for oil rights, and deposited $500,000 in an account controlled by Ugandan Foreign Minister, Sam Kutesa.

The department also accused the pair of providing gifts and promises of future benefits to those officials, including offering to share the profits of a potential joint venture in Uganda that will involve the energy conglomerate as well as businesses owned by the families of Kutesa and Yoweri Museveni, Ugandan president since 1986.

The couple also allegedly wired almost $1 million in bribes through the banking system of New York, the department added.

CEFC denied its connection with the arrest.

“The (China Energy) Fund is not involved in any of the commercial activities of CEFC China,” the company’s statement said. “CEFC China’s investment project in Uganda is only a financial investment by CPC Corporation, Taiwan... It does not have any so-called ‘interest-based relationship’ with the Chadian government.”

Sources told Caxin that Ye Jianming, CEFC’s founder and chairman, is politically savvy and very well connected. Ye established China Energy Fund of Hong Kong and named Ho as its head when CEFC was still an energy trader back in 2011.

In fact, public records also show that Ye had connections with officials in Uganda and Chad.

Two months later, Ye met with Deby and Chad’s ministers of oil and economic affairs in Beijing. Deby expressed at that occasion that CEFC China is the most trustworthy company, whose cooperation is highly valued by Chad’s government.

Besides acquiring assets in the oil industry, CEFC China also tried to expand into the financial industry in the U.S. The company signed a strategic agreement with U.S. investment bank Cowen Group in March 29, aiming to buy up 19.9% stake of the firm for $100 million to become the controlling shareholder.

However, CEFC China said Sept. 15 that it will withdraw its application to the Committee on Foreign Investment in the United States. The company has not elaborated on the matter.