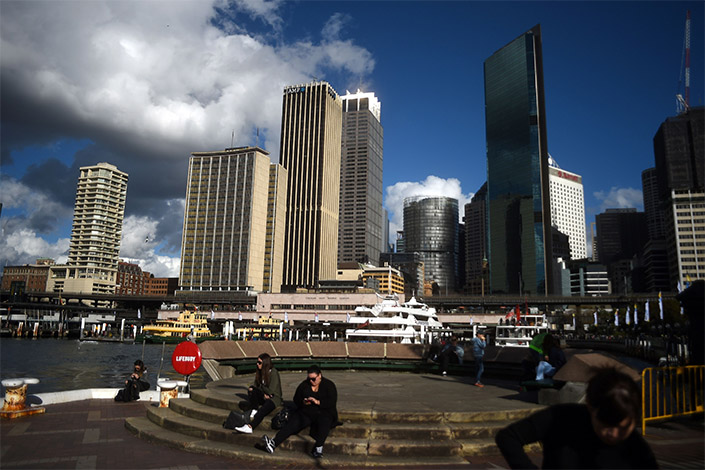 Wanda Group's transformation into an entertainment giant has landed it with huge debts, and has also put it at odds with a Beijing campaign to clamp down on overseas purchases by Chinese buyers in the leisure and entertainment sectors. The glass building on the right side of the above photo is Sydney's One Circular Quay, which Wanda owns. Photo: Visual China

Real estate giant Wanda Group said it is exploring strategic options for its offshore portfolio of properties worth billions of dollars, four months after announcing a shock decision to sell its even larger Chinese portfolio of hotels and theme parks.

Wanda Hotel Development Co. Ltd., the group’s Hong Kong-listed hotel operations and management arm, announced its position in response to a media report that it was in talks with a third party to sell some of its major projects in the U.K., the U.S. and Australia for $5 billion.

The company, which is reportedly struggling under a heavy debt load due to recent rapid expansion, denied any specific talks with a third party for such a $5 billion sale. But it added that it is periodically approached by third parties interested in buying its overseas properties.

“Following the recent changes in some directors of the company, the company is undertaking a strategic review of its property projects and will consider any business opportunities which can create value for shareholders,” Wanda Hotel said in the statement. The company’s shares fell 4.3% in Wednesday trade after the announcement was made.

Wanda has spent the last five years transforming from its roots as a real estate specialist to become a more diversified entertainment giant. That transformation has included construction of a series of theme parks throughout China, and purchase of a number of offshore cinema operators, movie studios and sports-related companies costing billions of dollars.

That buying spree not only left Wanda with huge amounts of debt, but has also run contrary to a Beijing campaign begun earlier this year clamping down on overseas purchases by Chinese buyers in the leisure and entertainment sectors. Amid that campaign and the company’s own large debt load, Wanda made the surprising announcement in July that it would sell 77 of its hotels and 13 theme parks to two buyers in separate deals with a total value of 63.75 billion yuan ($9.6 billion).

In August, the company also announced it was pulling out of a $606 million deal to buy Nine Elms Square, a 10-acre high-end apartment project in southwestern London, just two months after agreeing to buy the site.

Analysts and observers have said the company’s sale of the theme parks and hotels is part of an “asset light” strategy often seen in the West. Such strategy typically sees such companies focus on higher-margin and less capital-intensive management of properties, while leaving actual ownership to third-party real estate specialists.