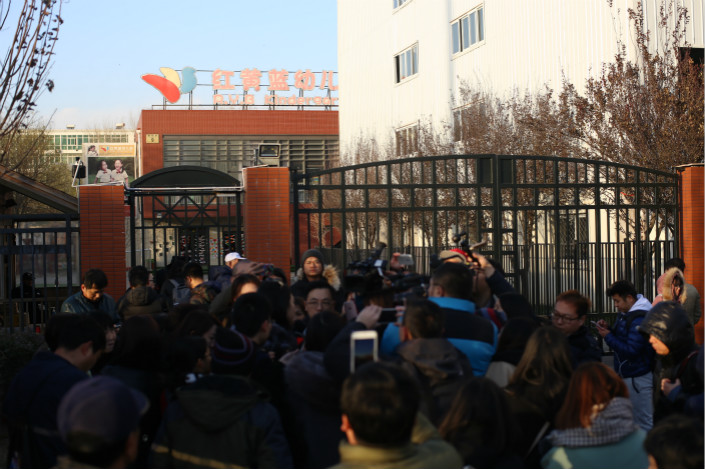 Parents and reporters crowd together Thursday outside the Beijing kindergarten accused of abusing children. The company that runs the facility directly operated 80 kindergartens and franchised another 175 preschools, in 130 cities and towns across China, as of June 30. Photo: Caixin

A group of parents protested outside a Beijing kindergarten on Thursday over alleged abuses after needle marks were found on at least eight children.

The school in the eastern suburb of Guanzhuang was run by RYB Education Institution, which was listed the New York Stock Exchange on Sept. 27.

One mother told Caixin that she had found needle marks on her daughter’s arms, buttocks and forehead. Several parents, who had found similar jab marks on their children, said the needles may have been used by teachers to discipline children.

Guanzhuang police said a medical examination of eight children has confirmed that the wounds were caused by needles.

Three teachers at the kindergarten have been suspended, according to a local education official.

A group of parents also told Caixin that teachers at the facility had given the children “white tablets and a brown syrup.” The parents said they don't know what these substances were. Police said they were still looking into this accusation.

“Disobedient students were also forced to stand naked or were locked up in a dark room at the kindergarten,” one parent said. The incidents were reported in two classes, each having 25 children aged 2 to 6 years old.

RYB Education hasn’t responded to the allegations. The Chaoyang District Education Bureau told Caixin it was investigating the alleged abuses.

The company’s Nasdaq filings show that as of June 30, it directly operated 80 kindergartens and franchised another 175 preschools, in 130 cities and towns across China. Nearly 20,500 students were enrolled in these facilities.

This isn’t the first time that one of its preschools has been accused of abusing students. Four teachers at a RYB kindergarten in Siping in the northeastern province of Jilin were jailed for 30-34 months in October last year over “mistreatment of students,” after needle marks were found on some students in November, 2015.

Several parents confronted the management at the school in Chaoyang on Thursday morning, demanding access to surveillance camera footage from the school, but their requests have fallen on deaf ears, said one parent who wished to remain anonymous.

The issue at the Beijing kindergarten has touched a raw nerve as it comes less than a month after a similar scandal at a Shanghai daycare center affiliated to Chinese travel giant Ctrip sparked an outcry in China. One caretaker at the facility was caught on camera slapping a crying child. Angry parents uncovered over 60 other incidents of mistreatment.

Note: This story has been updated to show that three teachers at the private kindergarten in Beijing were suspended on Thursday.