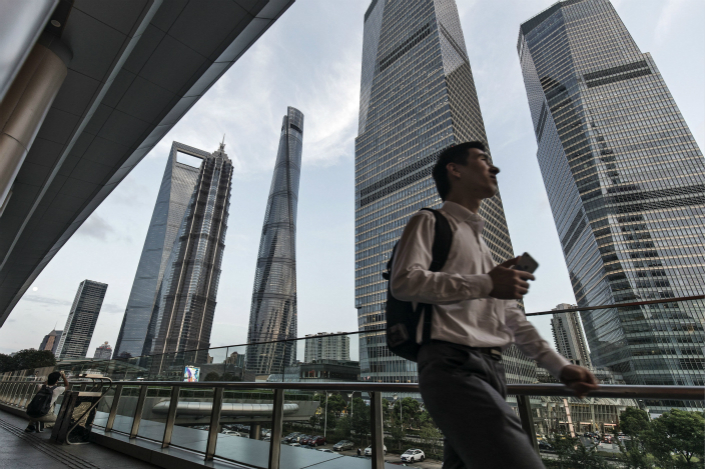 Domestic firms may see themselves as long-term focused, but most still face pressure to deliver strong results by the year or quarter. Photo：Visual China
Chinese companies are largely long-term oriented, but long-term behavior in China can be deterred by performance pressures from executives, boards of directors, investors and competitors. Promoting long-termism in financial markets has long been a topic of discussion, with much of the debate focusing on whether or not there are notable benefits. This argument has become particularly relevant as China moves to a ‘new normal’ state of sustainable, slower economic growth and a more proactive role on the world stage.

Interestingly, the findings of the proprietary research suggest that Chinese companies and their global peers are largely similar in their views. Broadly speaking, Chinese companies are largely long-term oriented. Both types of companies tend to have long-term orientation, though they can exhibit short-term behavior due to pressure from executives, boards, investors and competitors to deliver operational and financial results. However, one of the biggest differences the research found is that Chinese companies tend to be more affected by government policies and the current economic climate than their global counterparts.

● 80% of the Chinese companies surveyed believe they have long-term perspectives embedded into their corporate cultures. Many of them have strategic plans for long-term value creation.

● Stable leadership is highly valued by 89% of those companies and the remuneration packages are tied to executives’ ability to execute long-term corporate plans.

● However, 72% of respondents felt that executive teams were the biggest source of short-term pressure followed by boards, investors and competitors.

● 51% of executives who were evaluated on their current fiscal quarter or current fiscal year performance felt compelled to cut investments that usually generate long-term benefits, such as research and development and advertising, to meet short-term financial targets.

This research finds many parallels between Chinese and global companies, there are two elements that make the long-termism discussion unique and complex in the Chinese context: policy and the ongoing economic transformation.

● 71% of SOEs and 66% of non-SOEs say central-government policies dominate their long-term strategizing.

● As China enters a “new normal state” and transforms itself from a manufacturing base to a service oriented economy, growth is set to slow. 91% of the companies believe new normal state will encourage long-termism.

There is plenty of evidence bearing out that long-term corporate behavior, both inside and outside of China, bring positive benefits and are conducive to strengthening their competitive advantages, focusing on product innovation, increasing capital returns, creating more jobs and improving social welfare. Unilever, for instance, set a highly ambitious long-term plan in 2009 to stabilize its share price and double in size, while reducing the company’s environmental impact. The company took the decision to woo longer-term investors and discourage those in favor for short-term returns such as hedge funds. The change in the investor base over a three- year period helped to reduce fluctuations in the company’s share price and improve the company’s overall valuation.

Another international example of the benefits of long-termism is Norges Bank Investment Management (NBIM), which manages more than $800 billion in Norway’s global government pension fund and has a long-term goal to raise the equity content of the fund from 40% to 60%. In 2007, that goal was tested when the financial crisis hit and NBIM came under pressure to divest its equity holdings, which were rapidly losing value. However, its strong governance, coupled with ample liquidity, allowed it to continue on its long-term path. In 2008, it made an equity return of 34%, outperforming the market.

In today’s rapidly evolving environment, nurturing long-term corporate behavior requires concerted and coordinated action among all market participants. While there are still factors that pressure Chinese corporations to deliver short-term results, the move to a slower and sustainable growth environment requires executives to adopt a more long-term approach when formulating their business strategy. This is one area where CPPIB, as a major institutional investor with an extremely long-term view, has a significant role to play to encourage investors and companies to work together and promote long-term thinking and strategic planning in China.

● Investors should understand that while unexpected factors can impact the business results, they should look at the longer-term shareholder value creation to allow management more flexibility to invest in research and technology that can only demonstrate benefits over the long run.

● Additionally, investors should ally with other like-minded investors to promote public awareness and a long-term mindset in the investment community.

● Companies should have a set of well-articulated long-term metrics and targets that explain to stakeholders how the performance can be measured and tracked for consistency.

● Senior executives’ evaluation period should be extended beyond just one fiscal quarter or year, with remuneration tied to long-term value creation and strategic targets, with 23% of respondents believing an evaluation period of over 3 years is more suitable.

● Effective and proactive communications with investors are paramount in helping them understand the importance of adequate focus on the long-term as another significant component of a company’s growth and value creation.

● Regulators have a key role to play in building a market environment conducive for corporate long-termism through policy continuity.

● It would be tremendous support for long-term value creation if regulators would be able to help create a level playing field for both state-owned enterprises and private enterprises, and provide clear guidance and regulatory support on potential sector risks, environmental concerns, and the social responsibilities that enterprises are expected to shoulder.

Wang Zhe is a senior economist at Caixin Insight Group, a sister company of Caixin Global.