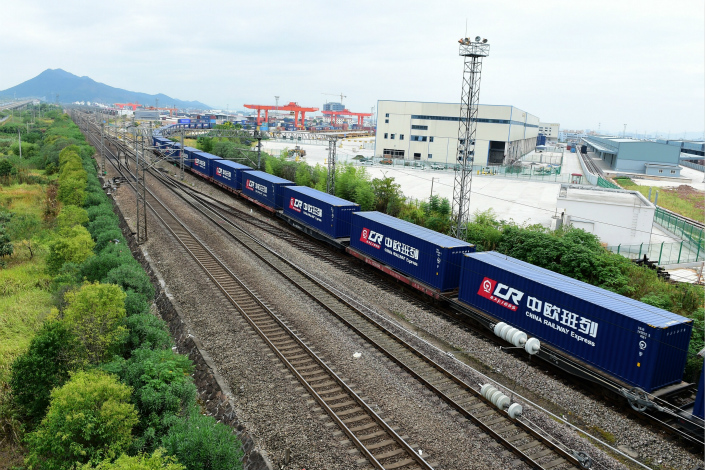 The agreements will expand China’s Belt and Road initiative to cover all of the central and eastern European nations, bringing the total number of foreign countries included in the initiative to 70. Above, the first China Railway Express freight train running to Prague from Yiwu, departs from the eastern Chinese city in September. Photo: IC

China’s Belt and Road initiative will expand to include all 16 central and eastern European countries (CEEC), Premier Li Keqiang said on Monday in Budapest, as he announced billions of dollars of financial support for the region.

The country will sign agreements with Estonia, Slovenia and Lithuania during Li’s meeting with CEEC leaders to include the three countries in the Belt and Road initiative, he said in a speech at the Sixth Summit of China and Central and Eastern European Countries.

The move will expand the signature initiative of President Xi Jinping — unveiled in 2013 with the aim of strengthening ties with countries in Asia, Africa and Europe, primarily through infrastructure investment and construction — to cover all the central and eastern European nations. It will also bring up the total number of foreign countries included in the Belt and Road program to 70, according to the Chinese government-run website devoted to the initiative, yidaiyilu.gov.cn.

The China Development Bank, one of the country’s three policy lenders, will provide funds equivalent to 2 billion euros ($2.4 billion) through development-oriented financial cooperation loans to the China-CEEC Inter-Bank Association, which was officially established on Monday, Li said.

The second phase of the China-Central and Eastern Europe Investment Cooperation Fund, totaling $1 billion, will be mainly spent in the 16 European countries, he said, according to a transcript of his speech published by the Ministry of Foreign Affairs on Tuesday.

Chinese companies invested more than $9 billion in the 16 countries last year, triple the $3 billion recorded in 2012. Bilateral trade rose 4.3% in 2016, he said, even though China’s total foreign trade fell by 6.8% that year. In the first nine months of the year, the growth rate in bilateral trade picked up to 14.1%, he said. He did not provide any value for two-way trade.

China’s imports of agricultural products from the 16 countries increased by 13.7% annually on average between 2012 and 2016, he said, adding that the country will increase purchases of the region’s products, such as meat, dairy, aquatic products, fruit, honey and wine.

Li also urged the early launch of a feasibility study on extending to Austria a railway line linking the Greek port of Piraeus with Budapest. He said China will support the building of logistics centers in the CEEC as part of an Asia-Europe transportation network.