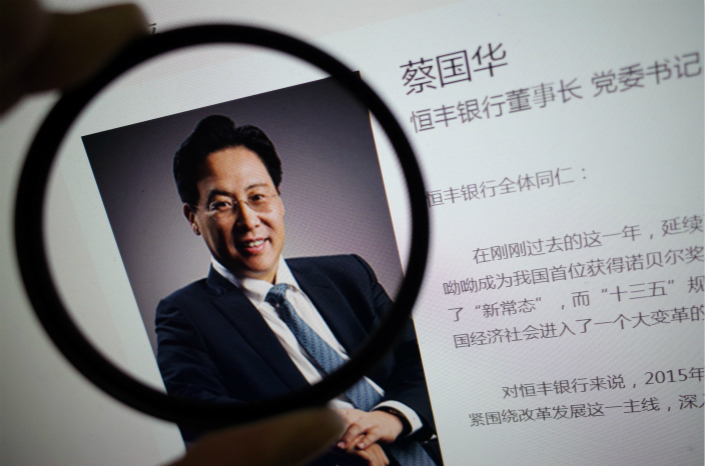 Hengfeng Bank, a national commercial lender mired in an internal power struggle and embezzlement allegations since May 2016, has undergone a major reshuffle of top leadership.

The decision was announced by the Shangdong provincial government in an internal meeting held on Tuesday afternoon, a gesture that suggests government intervention has been strong in this case, Caixin learned.

Hengfeng Bank, one of the country’s 12 national commercial banks, was put under the spotlight after an unnamed whistleblower accused Cai and others of misappropriating millions of yuan without approval from the board or shareholders.

The struggles heated up in December 2016, when the bank’s former president Lin Zhihong was unexpectedly removed by the bank’s board, which was tightly controlled by Cai.

Caixin earlier reported that top executives of Hengfeng Bank sought to use several companies to shield their control of the bank through complex shareholding structures, and embezzled 43 billion yuan during the process.

The country’s banking regulator once described Hengfeng Bank as a “typical example of unsound corporate governance,” and urged the regulatory body in Shangdong to tighten its supervision of the bank.

Meanwhile local state-owned conglomerate Shandong Luxin Investment Holdings Group Co. has started its due diligence on Hengfeng Bank, as the local government intends to take over UOB’s stake through Luxin to secure the controlling stake of Hengfeng.