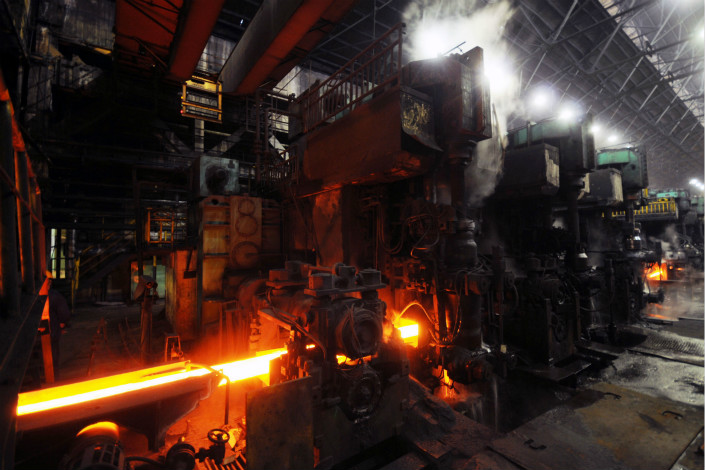 Hit by falling demand in recent years, Chongqing Iron & Steel reported a net loss of 998.48 million yuan ($151 million) in the first half of 2017 — an improvement from its net loss of 1.79 billion yuan in the same period last year. Photo: Visual China

Struggling steelmaker Chongqing Iron & Steel Co. is replacing some of its top management with personnel from China’s biggest steel company, as part of a broader company overhaul after years of heavy losses.

A group of Chongqing Iron & Steel executives, including General Manager Li Rensheng and deputy general managers Zhang Liquan and Yao Xiaohu, have stepped down from their posts to facilitate a reassignment of positions, according to a stock exchange disclosure filed Friday by the Shanghai-listed company.

Yu Hong, an economist who has held a number of positions at Baowu Steel, including in its securities department, will join Chongqing Iron & Steel as secretary of its board of directors.

Hit by falling demand in recent years, Chongqing Iron & Steel, which is also listed in Hong Kong, reported a net loss of 998.48 million yuan ($151 million) in the first half of 2017 — an improvement from its net loss of 1.79 billion yuan in the same period last year.

Earlier this year, the company warned it could face bankruptcy while it restructures. But it later said some investors, including Baowu Steel Group and WL Ross & Co., were “optimistic” about the company’s revamp.

Baowu Steel Group, formed late last year in a merger between Baoshan Iron and Steel Group and Wuhan Iron and Steel, had 228,000 employees and total registered capital of 730 billion yuan immediately after the merger, making it the largest steel producer in China, and the second largest in the world.